Stross, Westerfeld and Priest: It’s a Good Week (Plus a Pimping Thread)

For book lovers, this is one of those weeks where you hope you’ve saved your pennies, because there’s too many good books debuting this week. Here’s three I want to bring to your attention right now. 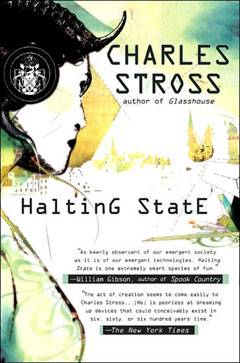 First, there’s Halting State by Charles Stross, which is just your typical black comedy heist caper taking place in a massively multiplayer online role playing game kind of story. Wait, what? You’re telling me that there’s no typical black comedy heist caper in a MMPORG, because there’s no other story of this sort? Well, fine. It’s the Platonic ideal of that newly-emerging subgenre, then. Get it while it’s hot.

As for Charlie, well. Let me first place the bet that early next year we’ll see Charlie on the Hugo Best Novel ballot, again, for the fifth year running, mind you. I’ve said before that Charlie is the poster boy for science fiction here in the first decade of the first century of the third millennium, and Halting State makes him even more poster-y, if that’s possible. He thinks up so much interesting stuff, on such a regular basis, that you want to take him aside and take his temperature or something, to make sure that his brain isn’t going to bubble away into a thick pudding from processing so much stuff so fast and so well.

Which presents a conundrum. On one hand, if he blows a gasket, that’s another Hugo spot open for the rest of us. On the other hand, I’m a reader and a fan, so his burning out is not something I want. So put an ice pack on your brain, Charlie, and get back to work.

Second, there’s Extras by Scott Westerfeld, which continues his bestselling Uglies series in a way that I like: It’s in the same world, but with a new setting, a new time frame, and new lead characters. Being that I’m writing a fourth book in a series that has an existing trilogy already in it, you know I’m taking notes. I’m also taking notes because I’m trying to do something Scott does very well, which is to write realistic and interesting young female characters. I’m commented before that writing like a girl is hard when you’re a guy downsloping toward 40; you don’t want to screw it up. So I’m paying a lot of attention to how Scott does his thing. 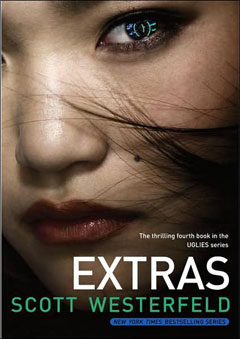 I’ve mentioned before that Scott’s Uglies series is bestselling; just check the New York Times lists for that. But I also think Scott’s YA sf/f stuff (which also includes Peeps, The Last Days, So Yesterday and the Midnighters series) is — or will be — immensely influential. Here’s my thought on that, and it’s something I’ve noted at conventions but not here: 20 years from now, people will think on the Uglies series and Scott’s other work much in the same way people my age thought on the Heinlein juveniles — the place where their love of science fiction, and in some cases of just plain reading, got its kick start. Scott is doing what Heinlein did in his juvies: puts teens front and center of future world, and gives them moral and personal challenges to deal with, challenges which speak directly to what’s actually going on in the readers’ lives at the time. Now, to be sure, how Scott does it and how Heinlein did it are rather wildly different in form and execution, but fundamentally it’s the same thing. And Scott’s basically the only writer going full guns on the science fiction side of YA and hitting the bestseller lists; everyone else is wrapped up in fantasy.

What this means is that starting in just a few years, I think we’re going to see a bunch of writers who see Scott as a primary influence on how they view science fiction; when they talk about the foundation their writing house is built on, he’s going to get his props — again, like Heinlein does for my generation. But unlike with Heinlein, I think a bunch of science fiction fans are going to be walloped upside the head by Scott’s apparently sudden significance, because for some unfathomable reason being a YA science fiction writer doesn’t have as much currency as it ought to have, and Scott doesn’t have the profile in science fiction fandom that the quality of his writing and his sales justify. And that’s kind of stupid, if you ask me: Scott’s hoeing the row for the genre with another generation of readers, and not with just “the usual suspects” for science fiction, but with the other kids, too.

Now, maybe that’s changing: I’ll note that Scott along with his wife and fellow YA writer Justine Larbalestier have been tapped as Guests of Honor at the ConFusion convention next January, so it’s clear that some vanguard of fandom is on to him and to the importance of new, current YA to the science fiction genre. I just wish the rest of SF would catch up, too.

In the meantime, you heard it here first: Scott Westerfeld, future massive influence on written science fiction. It’s going to happen; you just have prepare. All I can say is thank God he writes as well as he does. 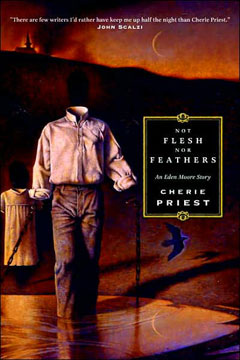 Third but absolutely not least is Not Flesh Nor Feathers by Cherie Priest, which is the third (and if I’m correct, concluding) book featuring Cherie’s character Eden Moore, who sees ghosts from time to time and is not necessarily happy about it. I’ve mentioned before that I’ve got just a little bit of lit crush on Eden, because I think Cherie has built her just right: She’s smart and capable and resourceful, but realistically so — or, at least, as realistically as possible given the supernatural contexts in which she often finds herself — and I like the fact that sometimes, she just gets exasperated at it all. Eden’s not just a character, she has character, which is important for me as a reader.

The same could be said about Cherie Priest as a writer, which is I think all to the good. Cherie toes an interesting line; she can whip up a scene that will make you sort of want to casually flick on the lights if you’re reading at night, which is difficult in itself, but she wraps those sort of scenes in a writers voice that is wry and warm and in a very real sense comforting (which means, of course, that when those prickly scenes come, and they do, they really jab you in the eye). There are many things to say about Cherie’s writing style, but one thing you can’t about it is that it’s anonymous. Cherie is blessed with a voice, which to be flatly honest is not something every writer — even some good ones — can say.

Also, this is the third time I’m deeply envious of Cherie’s cover art, which is done to creepy perfection by John Jude Palencar. Note to self: Devise some way to get a Palencar cover on one of my books.

Now having pimped my friends’ books mercilessly, I open the floor to you and declare this a pimping thread. Pimp yourself! Pimp your friends! Pimp random strangers whose work you like! Tell us what’s worth reading, hearing, seeing, tasting, feeling, smelling or thinking about. Note, however, that three or more links in your comment will get it sent to the moderation thread. Don’t panic, I’ll release it eventually.

← Yet Another Creation Museum Update
Death Comes to Funky Winkerbean →

32 Comments on “Stross, Westerfeld and Priest: It’s a Good Week (Plus a Pimping Thread)”