Yup, getting near Halloween.

It’s been brought to my attention that someone is selling a new (i.e., unread) copy of Agent to the Stars for $999.95 (here’s the link for verification, although if you visit it after today, who knows if it will work).

My thoughts on this:

1. At that price for a book, does taking a nickel off actually work on a psychological level?

2. Would someone really pay that much for something they can read online for free?

3. If they would, couldn’t they just buy 140 copies of The Android’s Dream in paperback instead, and artifically inflate my opening week numbers? That would make me and my publisher happy! Heck, I’d give them a copy of Agent to the Stars for that. Hint, hint.

4. If someone can really sell their copy of the book for $1,000, I suddenly know how I’m playing for Athena’s first year of college ten years down the road.

I wouldn’t stop anyone from spending $1,000 on a book of mine if it actually and genuinely makes them happy, but, you know. I can think of better uses of one’s cash. And God knows I’m having a hard time thinking of a book I’d spend a thousand dollars for, so I can’t imagine why anyone would spend $1,000 for mine. This isn’t fake humility, by the way, since I clearly don’t mind putting out $250 limited lettered editions of my work for all y’all solvent enough to buy them. But a grand seems a bit much. That’s an iPhone and a PS3! And pizza! The mind boggles, it does.

FedEx brought a whole box of these today: 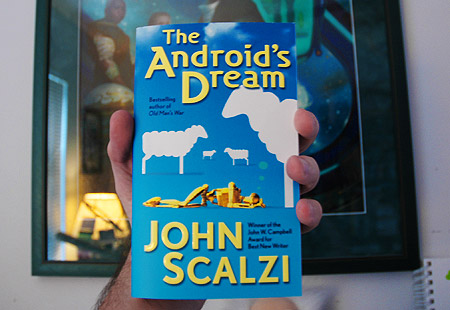 And I have to say, they look great. I think the cover looks even better on the paperback than it did on the hardcover — the more compact layout suits the design — but even more cool is the fact that the book’s cover is a festival of textures: The words are bumpy, the sheep are slick and the blue feels just a little nubbly. We’re talking a riot of friction gradients everywhere you touch. I can’t stop petting the cover. Honestly, I don’t know what’s wrong with me.

The official street date for this paperback is next Tuesday, but inasmuch as this isn’t Harry Potter, I would suspect copies are even now making their way onto store shelves. If you see it in the wild, I’d be obliged if you’d whip out your cell phone camera and get a picture.

Also, I hope those of you who haven’t checked it out yet will give it a try. I’m not supposed to say things like this, but this really is my favorite book so far: I love all my books, mind you — I wouldn’t publish anything I didn’t think was pretty damn good — but this one’s my special pet, because it’s just completely nuts. I mean, come on: I started it with a chapter long fart joke. And it’s a good joke, if I do say so myself. Pulling that one off was a huge boost to my fiction-writing confidence. Also, and independently, I think this is the book of mine that would make a kick-ass summer movie. It’s a popcorn-shoveler if there ever was one. Deep? Not so much. Fun? Hell, yeah.

So, yeah: Me pimping myself. You want to get this one. Clamor for it at your local bookstore, or at the various places you shop online. Don’t worry, I’ll remind you on the official release date, too.

And when you get it, run your fingers over the cover. You’ll see what I mean about the friction gradients. Well. Feel it, in any event.

This is another one of my famous “put it up there to refer people to” posts; this one is my current list of science fiction convention appearances for 2008.

January 18 – 20: High-Voltage ConFusion (Troy, Michigan) — I’ll be the toastmaster for this; the other Guests of Honor are Scott Westerfeld and Justine Larbalestier (yay!), Carl Lundgren, Kevin M. Dunn, Throwing Toasters and The Roaming Pirate Party.

April 18 – 20: Penguicon 6.0 (Troy, Michigan) — GoHs here are Tamara Pierce, Randall Monroe and Keith Baker. As far as I know, I’m attending this year as a common schmoe Nifty Guest, and apparently they’ll be serving Schadenfreude Pie in the con suite as well. Excellent.

May 23 -25: Oasis 21 (Orlando, Florida) — GoHs here are David Gerrold, Paul Vincenti and Bill and Brenda Sutton; I’m attending here as “Special Guest Writer,” which I’ve been lead to believe involves presenting David Gerrold chocolates on demand. Or so David tells me, and who am I to argue? He’s the Guest of Honor, after all. This will constitute my first ever appearance in Florida, incidentally.

August 6 – 10: Denvention 3 (Denver, Colorado) — This is the Worldcon for 2008. GoHs are Lois McMaster Bujold, Rick Sternbach, Tom Whitmore and Wil McCarthy as toastmaster. Unless I’m nominated for something, Hugo-wise, I’ll be attending as a common schmoe.

August 15 – 17: ArmadilloCon 30 (Austin, Texas) — I’m the Guest of Honor here. With me are Dean Morrisey and Kelly Parsons, with Bill Crider as toastmaster. Joe & Gay Haldeman are the special guests. They are not required to present me chocolates on demand. The timing of this convention is fortuitous, actually, since the scheduled release date of Zoe’s Tale is August 19. I love it when a plan comes together. This will also be my first time in Texas, save a few hours at the Dallas-Ft. Worth airport.

November 28 – 30: LOSCON 35 (Los Angeles, California) — That is, if California is still standing after the current series of wildfires. Yeah, I know, I always thought it would be an earthquake that brought the place down, too. I’ll be Writer Guest of Honor here. Don’t know who the other GoHs will be yet.

Six conventions is about on par with what my annual schedule of conventions has been the last couple of years, and is actually up from this year, when I attended a paltry four (ConFusion, Boskone, Penguicon and the Heinlein Centennial), although to be fair, I did have that whole tour thing. There are a couple of other conventions I’d like to go to next year, but I’ll be honest and say that looking at my schedule for 2008, and throwing in the other appearance commitments I have (plus, you know, the writing that I theoretically have to do) I don’t know what else I’m going to be able to fit into the schedule.

Also, we’ve been spending silly amounts of cash on traveling and other frivolities this last year; it’s been fun, but we’re also suddenly aware that like anyone else, we’re going to be better off if we actually pay attention to how much money we have flying out the door. I think 2008 will be a year of relative financial responsibility if not austerity, which means the cost for a convention weekend (air travel, taxis, hotels, food, new books, exotic massage services, etc) is going under the same financial microscope as everything else.

Which is to say that if you want to see me in a convention setting in 2008, these really are your best bets.