Received a note from Patrick Nielsen Hayden today to tell me that the trade paperback release of Agent to the Stars is scheduled for November, 2008. He also wishes to stress that date is tentative, and may bounce a couple of months in either direction. Be that as it may, those of you who have been saving your pennies by the tens of thousands to buy the limited hardcover may now release them, as if in a flood, to cover other purchases.

You’re welcome. Think of me when you snap up that iPod Touch.

Jeff Hentosz, who is handy with that there Photoshop, sends word that he’s “fixed” the cover of The Android’s Dream for me: 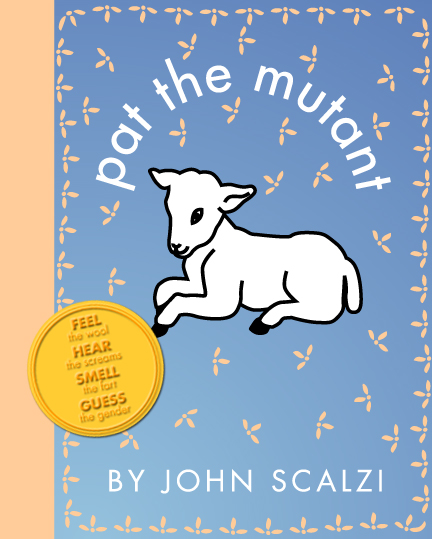 All I can say is, I’m glad I didn’t Photoshop this. Because then people would be asking me about my deadlines.

Probably because so many friends were recently let go at AOL, I had a dream in which I was being laid off at some sort of organization that was a mash-up of AOL and the Fresno Bee (those two being the real jobs I had, back in the day). The funny thing is that in my dream, I am what I am now, which is a freelance dude who works on contract from time to time. So when the guy came in to tell me I’d been laid off, I just looked at him like he was nuts. Which was a nice feeling, even if it was just in a dream.

Left unanswered was what I was doing in an office, where I had apparently worked for years on end, if, in fact, I was a freelancer, but that’s dreaming for you. Dreams don’t actually have to make sense all the way through, or even part way through.

Also, I’m not sure why I was a parrot. That’s probably best left unexplored.

This is a heartwarming story: Homer Jacobson, a retired chemistry professor, Googles his name and discovers a scientific paper he wrote half a century ago, and which he discovers has errors in it, is being used by creationists using it to show how life couldn’t possibly have started up without help from God.

So he retracted it.

That is not because he objects to religion, he said. Though he was raised in a secular household, he said, “Religion is O.K. as long as you don’t fly in the face of facts.” After all, he said, no one can disprove the existence of God. But Dr. Jacobson said he was dismayed to think that people might use his work in what he called “malignant” denunciations of Darwin.

Things grew worse when he reread his paper, he said, because he discovered errors. One related to what he called a “conjecture” about whether amino acids, the basic building blocks of protein and a crucial component of living things, could form naturally.

“Under the circumstances I mention, just a bunch of chemicals sitting together, no,” he said. “Because it takes energy to go from the things that make glycene to glycene, glycene being the simplest amino acid.”

There were potential sources of energy, he said. So to say that nothing much would happen in its absence “is totally beside the point.” “And that is a point I did not make,” he added.

Another assertion in the paper, about what would have had to occur simultaneously for living matter to arise, is just plain wrong, he said, adding, “It was a dumb mistake, but nobody ever caught me on it.”

Well, he caught himself, rather after the fact. But once he did, he moved to correct the error. Because fundamentally (heh), that’s what science is about: Moving human understanding toward a more accurate representation of the world around us.

What will be interesting to see now is how long it will take for the creationist sites to catch on that a pillar of their defense has been removed; I suspect it will take a while. Which of course will make it fun for the scientifically minded who wander by their sites: “You’re still citing Jacobson? He retracted that piece, you know. Because it was wrong.” To which I can imagine the light-on-the-feet response might be: See, scientists are wrong about everything. You can’t trust them to tell you the truth.

Which, if that were to be the tack they’d take, would be missing the point. The reason to trust scientists to tell you the truth is that they’re always trying to prove things wrong — testing their assumptions and beliefs about the nature of things to see if they still work, or if they come undone with new information and observation. It’s a little pollyanna to suggest scientists like being wrong; scientists are all human and have egos and like most people like it when they’re right about things. And, being human, they can be intractable: Fred Hoyle would have rather died than give up on the steady-state theory of the universe (and he did). But fortunately scientists don’t have problems challenging the assumptions of other scientists. So it works out. On balance science and scientists provide an accurate view of matters relating to the physical world, so far as we understand them at the moment.

I don’t imagine Dr. Jacobsen liked discovering his work was wrong. But I suspect what he liked even less was that people are trying to use his work to spread ignorance. Thus, the retraction. Good for him.