It Just Means I Have Them Fooled

Via Elizabeth Bear, I took this online test to see just how filled with Aspergian tics I might be: 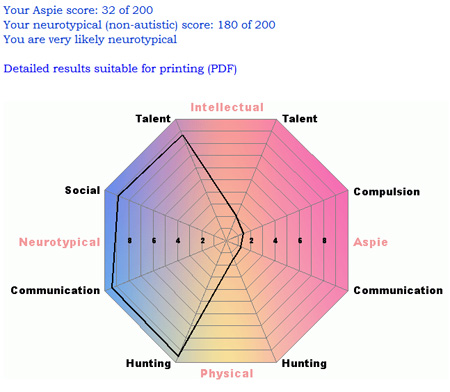 To which a little voice in my head said, You’re neurotypical? They’ll kick you out of science fiction for that! Well, what can I do. I am who I am. I hope the slans will still accept me into the tribe.

If this little self-administered test does indeed have any relation at all to actual Apergian and/or neurotypical states of mind, I have to say I’m not entirely surprised; generally speaking I am pretty well socialized. I also suspect that if I took this or a similar test when I was, say, 14, my responses and behaviors would offer up a somewhat different result. I don’t know that would ever have been clinically described as Aspergian, but I wasn’t precisely normal either, as anyone who knew me at 14 would tell you. Certainly my socialization skills were a bit of out of whack, partly because I was a 14-year-old boy, and you know how they are, and partly because of other more personal factors. I suspect I finally got the hang of socialization thing in my mid-20s, which was lucky break for me, since that’s when I met my wife.

I have some mild curiosity about whether my allegedly neurotypical mindset is a matter of my brain growing into itself, or of me being smart enough to pick up clues and incorporate them, or some combination of the two. When it comes down to it I don’t know enough about Asperger’s or autism to do anything more than speak out of my ass about it, so I’m at a distinct disadvantage there. I’ll have to ask my friend Natasha, who is a psychologist, and who has known me since we were 14. I imagine she’d have a lot to say on the subject, much of it told while giggling as she recounts my 14-year-old self.

On second thought, maybe some things are better left unknown.

Update: Krissy was curious how she would fare, so she took the test too: 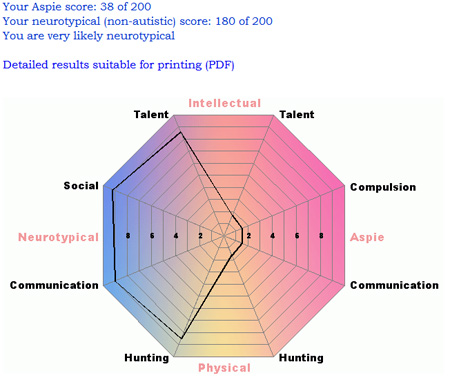 Clearly, we’re made for each other.

49 Comments on “It Just Means I Have Them Fooled”