Submitted for your approval : 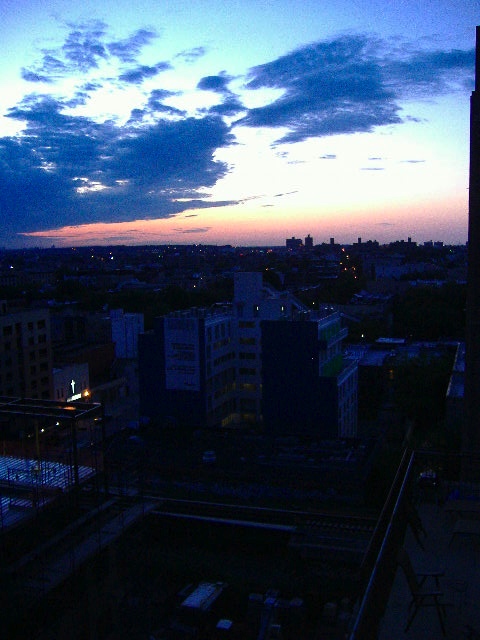 My camera is old, and one of the first things on my “stuff to buy when I next have a windfall” list is a digital SLR. But the old clunker still manages to capture some things just right. This isn’t today, which is gray and dreary; I took this a couple of days ago, from the window of the new apartment. Now imagine gazing at this while listening to John Coltrane’s “Equinox”, and you’ll know what a perfect Brooklyn sunset feels like.

Ever since I was a little girl, I loved going to the movies. The first film that I remember was ET at a now defunct drive-in. (Damn, I really miss those.) Then multiplexes were popping up everywhere. While we would pay for the ticket into the theater, I never understood why my parents thought it necessary to pop corn at home and stow it under  big winter coats or in my mother’s large purse. I always resented the fact that I couldn’t have that over-salted, yellow monstrosity in an overpriced bucket. We weren’t trying to be obnoxious, that stuff was just as expensive even back then.

We’d do the same with other snacks as well. Hitting the local RX Place next to the cinema, we’d hide cheap cans of soda and candy within our pockets only to get nervous as we approached the overzealous ticket warrior.

He only caught us a few times, when the smell of burned kernels wafted up through our clothes or my when my little brother asked when we could have the sweets we just bought at the “other place”.

I remember being mortified. But now, as an adult with small children, I realize something. (This will happen a lot when the child becomes the parent.) My mom and dad were pretty smart. They “skimped” on those luxuries because we couldn’t really afford them and by doing so, with the money we saved, we went to more movies. If we really liked a certain film, sometimes we got to see it a few times if all the bills were paid and food was in the refrigerator.

As I got older and got a job of my own, I continued to follow that unspoken advice borne out of necessity. Granted, there are times where I don’t bring anything on which to munch, but I have been known to hide those Red Vines purchased at a much lower price in an overly large winter coat, or in a purse.

And you know what I do with the money I save? I  go to more movies.

As theaters continue to squeeze dime and dollar out of already struggling families with rising ticket and concession costs, perhaps they could take a lesson from my parents. I do believe there will be a breaking point. Either when the public is sick of paying to watch commercials at the beginning of their movies, or they just stop going all together because it’s cost prohibitive.

As for the popcorn, I never did get used to the taste. Anytime I decide to splurge with either friends or my own children, I always end up with a stomach ache and a much lighter wallet.

But I’m sure that James Cameron and the studios appreciate the fact that I went to see Titanic seven times and have seen other films numerous times as well.

And no, for the last time, I don’t want a large for just 25 cents more.