It’s mentioned here in this announcement in the September ’11 issue of Locus: 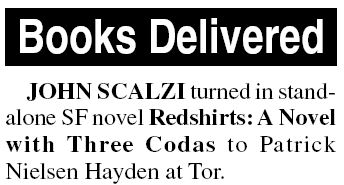 And now you know. Well, you and a couple of thousand other people, all of whom showed up to my readings over the last several months and swore secrecy about the title until I and Tor released it. And you know what was awesome? Almost without exception, people held themselves to that oath. I think it says something fairly incredible about science fiction fandom that you can ask a couple of thousand people to keep a secret, and they will. Thanks, folks.