In the comment thread for “The Sort of Crap I Don’t Get” there’s a very excellent, long comment about being a straight white guy that I encourage you to read in full, because it really is that good. It includes a relevant point I am going to excerpt, and comment on right now. It reads:

Two or three years ago I was reading a thread here (or possibly on Making Light) which dealt with the idea of privilege. I honestly don’t remember what specific thread it was, but it dealt with some privilege that I have — it might have been straight privilege, male privilege, or white privilege. I really don’t remember. I do remember being very put off by many of the arguments being made — the inference that I drew that people were trying to shame me by proxy, that I was bad for being [straight|male|white]. That really got my back up, especially because so many of the comments seemed to amount to saying “shut the fuck up.” But….

What saved me at the time from replying and showing my ass was that a closer reading of those comments (and by closer, I mean actually paying attention to what they said as opposed to just taking offense where I might be able to justify it) showed that they were saying “shut the fuck up and listen.”

As a poster boy for the “White Man Explains the World” set more than once in my life, allow me to say the following: Yea, verily. It’s hard to get us to shut up; it’s harder to get us to listen, for values of “listen” other than “waiting for the other person to stop making word noises so I can keep making my very important point.”

In fact, I think one of the hardest lessons to learn is the “shut up and listen” one. It was for me, and I’m still (oh so very not) perfect at it. Why is it hard for me? Because I’m used to people being interested in the things I have to say. This is partly due to being clever and good with words; partly due to having a large ego that makes me lead with the assumption that other people will find me entertaining and/or interesting to be around; partly due to having intellect and education enough to know at least a little about a lot of things (dangerous in itself), be able to make connections between them, and to defend my positions with at least some rigor. I am independent of anything else psychologically constituted to expound, and to argue, and to be confident of how I express myself.

Underlying all of that is the basic set of advantages I get unearned by being what I am, i.e., a white male. I became aware of this fact only over time, by having this advantage set pointed out to me repeatedly by those who are not what I am. Which is a bad deal for those folks, to be sure — the highest life crisis of everyone else in the world is not, in fact, making the White Male understand what he gets unearned.

I suspect in my case it would have been even more work for the rest of the world if I hadn’t had the experience of growing up poor, which meant that every time I saw or read someone who’d never been poor expound obliviously on what was really going on with poor people, I had to fight back the urge to beat them to death with a hammer. The experience of having to deal with people wealthsplaining poverty, and then trying to get them to listen to someone who had spent actual time in poverty, made it possible for me to more easily conceptualize the idea there were lots of subjects about which I had great potential to show my ass simply by opening my mouth.

Which doesn’t stop me from doing so, mind you. Knowing you have vast potential to show your ass doesn’t mean you won’t show your ass. It just means that you have to own up the fact you did it to yourself when it happens, rather than shifting the blame elsewhere. Which is also a hard thing to learn to do. It’s especially hard when you see yourself being sympathetic or aligned to the plight of others and you still get called for ass-showing. It makes you want to ask for the “hey, I’m on your side” discount on your ass-tasticness. But just as the rest of the world does not see its highest life crisis as helping the White Male understand his unearned advantages, neither is it required to clap its hands encouragingly when the White Male says “look, I’m helping,” especially when in reality he’s making kind of a mess.

There are lots of things I think I’m right about. But I’m less inclined as I go on to think I’m right about everything, and I’m more inclined as I go on to recognize that my perspective is not universal. This means that if I want to learn and to understand things, I will from time to time have to shut up and listen, especially on subjects where others have more experience than I. It’s not always easy, because as noted, expounding is what I’m good at, and I’m not exactly shy. I have to make myself make the effort. It’s worth it for myself, and for how it helps me to understand others. 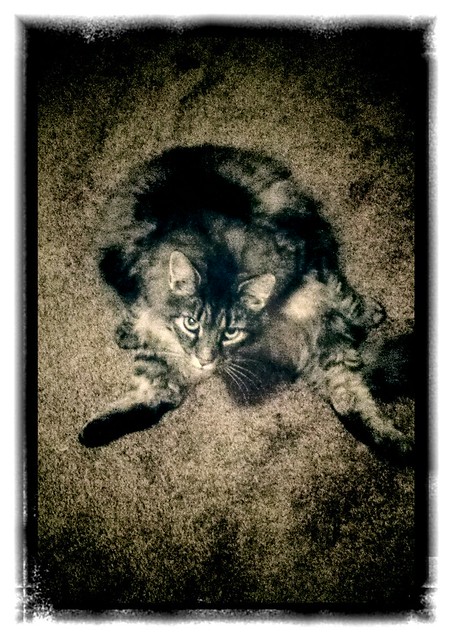 “Hope you enjoyed that extra day off. Now get back to work.”

Strong words from a large cat.