What We Did With Our Weekend, Concluded 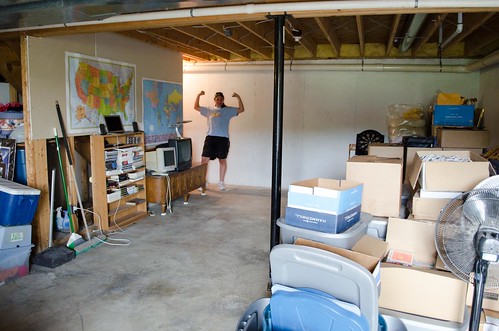 You’ll recall the picture of the basement from the other day, before we got to cleaning, organizing and throwing things out. Now as you can see the basement is substantially less entropic, with boxes neatly stacked to the side and a clear amount of space available to, you know, walk through. The other half of the basement, which you don’t see, is even more cleared out.

And for those of you wondering whether we managed to fill up that ginormous dumpster, wonder no more: 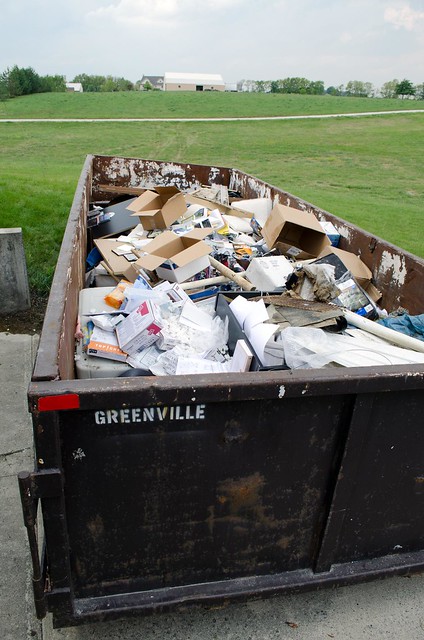 We did a pretty good job of it, yes.

We still have a lot in the basement, even after all of that. Much of it is temporary, since we have an entire wall of stuff we plan to donate, including at least several hundred books (I think the number is closer to a thousand, but I didn’t make the effort to count). When it came to deciding about what things to donate or throw out, we were pretty merciless, asking ourselves about the thing we were looking at a) how long it had been in the basement, b) if we missed it at any point during that time, c) if, were we someone at Goodwill, the thing would be something we’d be willing to spend a quarter on. The first and second questions dictated whether it went into the donation pile; the third dictated whether it went into the dumpster. The formulation wreaked havoc on my CD collection, I will note, 95% of which had been in boxes since we moved to Ohio a decade ago.

The only major side effect is now the cats have nowhere to lounge, we having thrown out the broken-down furniture we’d been storing there, which they enjoyed resting upon. I imagine I’ll be taking a trip to PetCo sometime during the week to address this egregious deprivation, else be smothered in the night by cat fur. It’s not like they have anywhere else in the house to lounge.

56 Comments on “What We Did With Our Weekend, Concluded”