You are today’s Tom Sawyer, Joe. Never forget that, my friend. 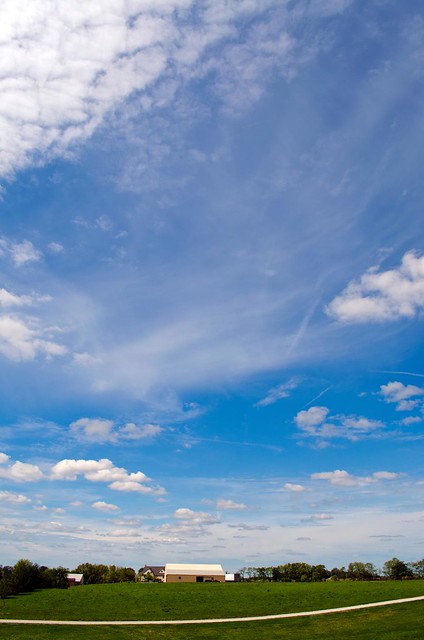 You guys usually see this view when it has a sunset in it. But today I thought showing off the wide variety of clouds in the sky. I count at least four different types. How many can you find? Yes! It’s a test!

You can admire literature for the craft that an author puts into his or her words, but the words are supposed to be working too — building a world that thrills or chills you — and a writer’s real craft is in creating work that does both. Debut novelist Christopher Buehlman has been thinking a lot about that balance, not just for his own novel Those Across the River, but in how other writers have pulled off the trick… or didn’t. Here are his thoughts.

I spent much of my adult life as a disappointed horror fan; as a teenager, I reveled in the work of Stephen King, whom I will always respect for his massive contributions to the horror genre, and whose early novels remain high on my shelf. As I broadened my reading, however, I discovered that, all too often, the book that thrilled my dark side and the book that made me drunk with its use of language were not the same book.

How many of us, and by ‘us’ I mean the psychic masochists who dare writers to reach into our minds and tickle our amygdalas, have suffered through awful prose, two-dimensional characters or poorly-researched historical passages just to get our spooky little fix? When did horror and literature sign their divorce papers? They got along so well in Frankenstein, after all. I will say that Shirley Jackson’s The Haunting of Hill House is the finest modern example I can name of literature and horror working together. Hill House’s bastard child, The Shining, is so damned scary it can be easy to forget what a fully realized character Jack Torrance is, and how credibly entwined the history of the Overlook hotel is with the ghoulies that set up shop there–but I will go to the mat for The Shining; it holds up.

My favorite mainstream books (i.e., books in which all the monsters are on the inside) were mostly written in the first half of the twentieth century, and they usually involve broken protagonists and doomed or unrequited love. Two authors dominate that landscape for me. F. Scott Fitzgerald was the prettiest one. He had such a luscious prose style, and so deeply understood the narcotic effects of love and the need to be in love. Hemingway, too, with his yang, shirtsleeves gallop, knew how to tell a love story and break our hearts with it. And there was something so compelling about the excesses of Fitzgerald’s 1920’s, and the way the Depression knocked everything down and brought us eye-to-eye with Hemingway’s earthiness.

Robert Penn Warren was a big influence, too. All the King’s Men was that rare beast, a high school lit assignment that I actually enjoyed. At fifteen, I didn’t have the palate to appreciate most of the hoary old classics they yoked us with, but in Penn Warren’s masterpiece I found the language so delicious and the story so compelling that I burned through it and revisited it about once a decade thereafter. It didn’t hurt that he was a first-class poet as well as a novelist. The depression-era southern setting, the haunting love story and the idea that secrets won’t stay buried fascinated me, still fascinate me, and resonate in Those Across the River.

My biggest literary debt goes further back than the 1930’s, though. The skeleton of Those Across the River is borrowed from Greek mythology. I didn’t stick to the story slavishly, of course, any more than Penn Warren did in his exploration of the Oedipus myth, or Steinbeck when he used Exodus as the bones of The Grapes of Wrath; but the basic structure is there, and mythology enthusiasts should be able to identify which narrative I’m playing with.

So there you have the Big Idea. Horror, love, myth and historicity. I desperately wanted to read a horror novel that was also a well-written and evocative human story.

So, gods willing, I wrote one.