LAST DAY for the “Redshirts” Auction to Benefit the Bradford, Ohio Public Library 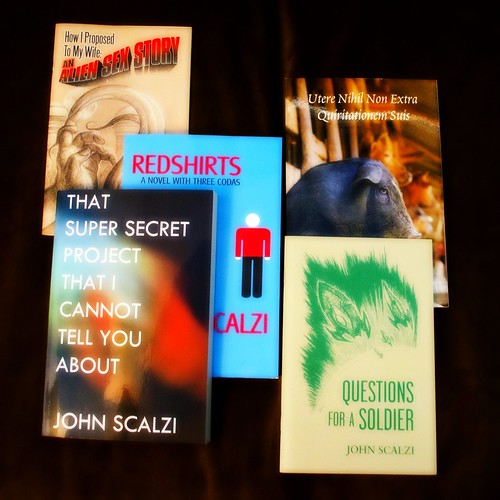 Yes! It is the last day! You have only until 11:59:59pm Eastern time to get your bid in to win the pre-publication bound manuscript of my upcoming novel Redshirts, plus a raft of other goodies, the bounty of which only increases as the bids go up. As of this writing the current bid is $6,000, which means that at the very least the winner will get everything you see in this picture, plus a rare signed hardcover edition of Agent to the Stars, plus the song of their choice performed by me on the ukulele. If the bid gets to $7,000, someone is getting pie. And I’m still hoping we get to $10,000, because damn it, I want an excuse to unleash that black velvet painting unto the world.

How will we get to those numbers? Simple: if someone bids them. All the details and the thread for bidding are right at this link. And remember that all the proceeds will go to the Bradford, Ohio Public Library. Which, incidentally, is now aware the auction is going on; I didn’t tell them but clearly someone did, because I got a very nice e-mail about it from the president of the library’s board of trustees. They are, as you may imagine, delighted. So thanks to everyone who’s bid so far: You’ve made a librarian’s day. More than one librarian’s day, even!

24 Comments on “LAST DAY for the “Redshirts” Auction to Benefit the Bradford, Ohio Public Library”