“Redshirt” Auction: What it Brought In (Hint: More Than You Think) 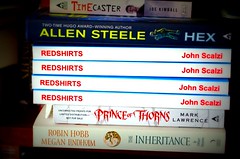 So the “Redshirt” auction ended last night on time, and the fabulous Brad Roberts took the pre-pub bound manuscript of the novel — and two rare chapbooks, and two even rarer pre-pub bound manuscripts, and a song played by me on the ukulele and a schadenfreude pie, which I will likely deliver in person to him at 4th Street Fantasy next June — all for $7,000, all of which will be donated directly to the Bradford, Ohio Public Library. I am thrilled. Positively and utterly thrilled.

Shortly after the auction ended — like, minutes — I received an inquiry from someone else:

I lost the auction, but I have a question. If I donated the difference between the winning bid and $10,000, would you give the winning bidder the items for $10k?

So: In fact the auction has raised $10,000 for the Bradford, Ohio Public Library — and there will be a black velvet painting of me and Brad Roberts fighting aliens WITH LASERS. Which is going to be awesome. Brad will also receive the $8,000 and $9,000 tier gifts, which means his name (or the name he choose) will show up in my next major work, and I will write a short story in which (or the person he chooses) is the hero.

Don’t worry, as the currently-anonymous benefactor will also receive rewards for his generosity, including a special prize package filled with cool stuff (which cool stuff I don’t know yet, but I’ll go through my cool stuff here presently and he’ll be thrilled), plus he’ll receive an official, signed ARC edition of Redshirts from me when Tor releases those later on this year — and when he cracks it open he’ll find a character named after him in the novel itself. Hey, I have the copy edit of the book right here in front of me, I can still do that.

So thank you, currently-anonymous benefactor! You are fantastic.

(He’s currently anonymous mostly because it’s fun to have him remain so at the moment, but he can out himself if he likes in the comments, or later on with his permission I’ll reveal who he is.)

Please, if you would, give a moment to applaud Brad. He’s doing a really wonderful thing for my local library and I am genuinely thankful that he stepped up. He earns my admiration along with all the groovy stuff he’s getting. Also say thanks, if you would, to the currently-anonymous benefactor, for putting the financial cherry on top of Brad’s donation, and for giving me an excuse to commission that black velvet painting, which I really really really wanted to do.

And everyone who put in a bid, please take a bow as well. You guys rock.

← LAST DAY for the “Redshirts” Auction to Benefit the Bradford, Ohio Public Library
A World Without Star Wars →

73 Comments on ““Redshirt” Auction: What it Brought In (Hint: More Than You Think)”