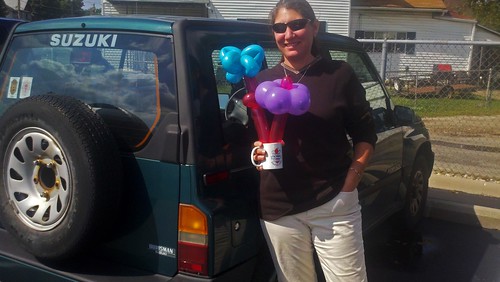 We’ve been meaning to donate our Suzuki Sidekick since we took delivery on the Mini Countryman. Today was the day we finally did it, giving it to the local Ronald McDonald House Charities to auction off (or whatever) in order to benefit small hospitalized children and their families. Here is Krissy with the Sidekick and a coffee mug filled with balloon flowers, which she was given in appreciation for the gift. The donation coincided with a local radio charity drive for the Ronald McDonald charities, so when we handed over the title and keys, I was briefly on the radio to talk about it; shortly thereafter I was being asked on my Twitter feed if that was me on radio. Yup.

It was a bittersweet moment for Krissy, since the Sidekick was the first car she had bought new, and she’s had it since 1997. But we hardly drive it since we have the new car; it served us well and now it’s time for it to serve other people more usefully than it’s serving us. We treated it well so if whomever gets it continues to do so, it’s got some life left in it yet. So good luck to it and to those with whom it will eventually find a new home.