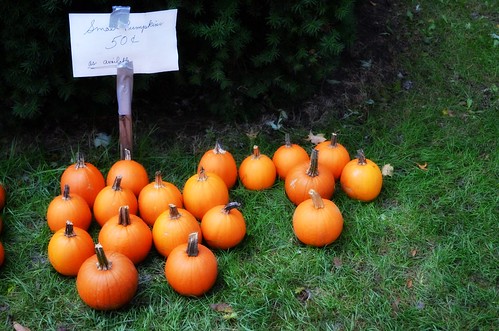 Oh, look, pumpkins. They’ve begun their two-month moment in the sun: Jack-o-Lanterns for October, Thanksgiving pies for November, and then back to wherever these gourds go for the rest of the year (I think a commune in the New Mexico desert). They’re adorable, they are.

October this year is going to be a little hectic for me, in no small part because for two weeks of it, I’ll be in Germany, touring (actually, I’ll be touring Germany for about ten days, and then spending a couple of days sleeping when I get back home). So from the 13th through the 24th, I’m likely to put the site on a semi-hiatus, which means that while I will update the site from the road when/if I can, you probably shouldn’t expect more than pictures and a few sentences. Hey, I’ll be busy. It’s possible that instead of the semi-hiatus I might invite a guest blogger during that period, but haven’t decided yet. If I do, of course I’ll let you all know (don’t ask to be the guest blogger, please).

Either way, for about a third of the month, I’ll likely be scarce around here. During that time, depending on my connectivity capability in Germany, I’ll try to be keeping up via Twitter and Google+, so if you’re not getting your Scalzi fix there, try those. Before and after those dates, it’ll be business as usual.

Also, while I’m in Germany, there won’t be any Big Idea entries. To make up for it, next week I’ll have Big Ideas on Monday, Tuesday and Wednesday. You know I wouldn’t leave you without any new books to learn about.

And that’s the state of things here in October.

26 thoughts on “Whatever Notes: October Edition”