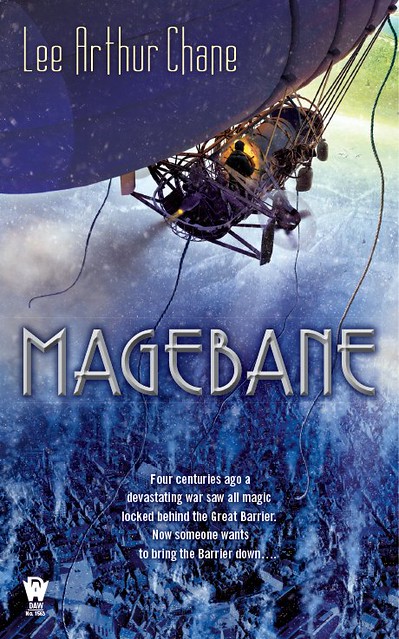 Author Lee Arthur Chane wishes to suggest that sometimes, one big idea is not enough for a book — or at the very least, it wasn’t enough for his fantasy novel, Magebane. Was he correct? The reviews are inclined to his point of view: The starred Publishers Weekly review claims that “Double and triple crosses, fast-paced action, and powerful moral conviction will have readers hanging on every word.” That seems enough to let Chane explain his heretical idea of multiple big ideas here.

I know this is called “The Big Idea,” but I trust Mr. Scalzi isn’t too much of stickler on that point, because, alas, my new fantasy novel Magebane didn’t grow out of a single big idea.  Instead, it grew out of four ideas: three big ones, and one not-so-big one. (But I suppose “The Big 3 1/2 Ideas” isn’t nearly as catchy a name for a recurring blog feature.)

What were these ideas, I hear you ask? Pray allow me to enumerate.

First: it is, of course, one of the hoariest of fairy-tale tropes that an enchantment can be broken with a kiss: typically, a prince kissing a princess. But one day while I was musing on this (and since I have a small daughter, princesses are something I have mused about quite often), I had the notion of writing a story in which a kiss didn’t just break an enchantment, it broke all enchantments: a story in which a kiss between a (sort-of) prince and a (kind-of) princess that would bring magic itself crashing down in ruin.

Now, that’s a somewhat subversive notion in fantasy fiction. Typically in fantasies the destruction of magic is not something devoutly to be wished: instead, they’re all about the restoration of magic, or at least the triumph of good magic over bad magic. But magic is, ultimately, a form of power: and like all power, it can be abused. Particularly if some people have it, and others don’t.

Where, I asked myself, are the democratic revolutionaries within fantasy fiction?

I decided to create some.

The third big idea: what happens in a world with magic when technology (any sufficiently advanced version of which, as Arthur C. Clarke famously said, is indistinguishable from magic) begins to give those who cannot wield magic the same abilities as those who can?

With three ideas in hand, I fired up my story-making cauldron, tossed in the ideas, stewed and steeped and stirred for a while, and eventually poured off 150,000 words of what I’d like to think is pretty tasty story.

In Magebane, the tyrannical MageLords, who rule by virtue of their magical power (pretty much their only virtue), were thrown down from power centuries past in their old kingdom by the Commoners, the non-magical people they rule, with the help of something or someone called the Magebane. Fearing for their lives, they used magic to flee to the far side of the world, where they established a new kingdom, protected from attack by an impenetrable magical barrier.

But now there are various MageLords who would like to remove that Barrier and exert influence over the outside world again, there is a new Magebane…and there are, bubbling up from the increasingly technological advanced Commoners trapped in the kingdom with them, the beginnings of rebelliousness.

What no one in the kingdom realizes is that the Commoners outside, for whom the MageLords are nothing but myth, have explored the world right up to the Great Barrier itself…and that their technology had advanced far beyond that of the Commoners within the Barrier. That is, no one realizes it until one young man crash lands in the kingdom aboard the experimental airship that has just flown over the Barrier…

As for the small idea that is also part of the Magebane mix? That’s the setting. The hidden kingdom of the MageLords is largely prairie in the south and forests in the north, with lots of lakes.

It has, in fact, the same geography as the Canadian province of Saskatchewan, where I live. And there’s more: in the kingdom’s capital, there is a white stone palace on the southern shore of a manmade man-made lake…just as there is in Saskatchewan’s capital city of Regina, where the Saskatchewan Legislative Building rises on the south shore of Wascana Lake, just a couple of blocks from my house.

Alas, the real lake and the real park surrounding it are not magically protected from winter’s ravages like the one in the book. You could call that wish-fulfillment, if you like, and I daresay you’d be correct.

But then, you could also call the whole book a kind of wish-fulfillment: a wish for fantasy that recognizes that even a benevolent dictator is still a dictator, and that whatever Tolkien may have primed us to believe, The Return of the King is not necessarily a happy ending.

Also, a wish for more fantasy with airships.

Because airships, like bow-ties on The Doctor, are cool. 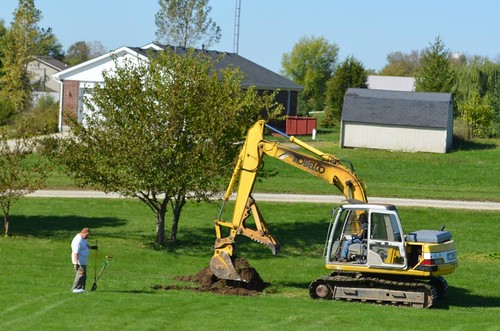 Not the usual thing.

The reason it’s there, incidentally, is that we need to repair some of the drainage tile that runs through our yard; it’s deteriorated over the years and that means that when we get a lot of rain, it tends to flow over our land rather than under it. This will hopefully fix that, or at least make it a less frequent occurrence. Just another thing you think about when you have a five acre lawn.