Zombies and vampires and werewolves are all fantasy creatures — but there are times when you look around at the people in the world and think to yourself, hmmmm. Author Matt Mikalatos knows a bit about that, as his new, humorously theological, novel Night of the Living Dead Christian has its genesis in the real world, and with real people… including the author himself.

Many people look at Christians, especially conservative Christians, and think, “Zombies.” Sure, they get to live forever, but it’s not like they’re sparkling conversationalists. And there’s this weird, overpowering urge they have to convert people into creatures like them. Immortality can be yours at the low, low cost of … your brains. Mmmmm, brains.

My Big Idea came while I was being yelled at by one of my co-workers. I happen to work at a Christian non-profit, and believe it or not, this happens pretty often. His wild, unkempt hair and his predilection for furious, grandiose monologues jarred me out of the conversation with the realization that my co-worker was a mad scientist. I couldn’t get the thought out of my head, and I found myself completely detached from the conversation, watching the guy and wondering what was in his basement laboratory.

I started looking around and realized this woman who lives across the street from me, my good friend, had every sign of being a vampire. She was selfish and a night owl and sometimes she looked at my neck like it was a straw.

Then there was this guy who didn’t celebrate Halloween, which was suspicious by itself. Add the fact that he put up a “No Halloween Here, Happy Reformation Day!” sign in his yard, and I had to think he was trying to prove there weren’t any monsters in his house. Also, every kid in town suspected he was a jerk. 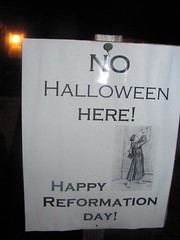 I know you think I’m exaggerating, but here’s a picture.

There were so many monsters around me that I was afraid to look in the mirror. Frankly, in my life, I can’t always stop myself from doing things I shouldn’t do, even don’t want to do on some level. I can barely keep myself from punching my co-worker in the nose. I want to be changed, I want to be someone better than who I am, but in certain areas of my life that proves elusive.

So, while a lot of theological works focus on answers, my book is more about the questions. Can human beings experience true transformation? Can we become something more than monsters? Is there a way to achieve a society without rape, injustice, violence, war, poverty and abuse? If so, is spirituality part of the answer, part of the problem or completely irrelevant? As Thomas Jefferson said, “We are afraid of the known and afraid of the unknown. That is our daily life, and in that there is no hope, and therefore every form of philosophy, every form of theological concept, is merely an escape from the actual reality of what is. All outward forms of change brought about by wars, revolutions, reformations, laws and ideologies have failed completely to change the basic nature of man and therefore of society.” I wanted to explore whether we can change our basic nature.

I’m also of the opinion that theology, by definition, should be interesting. Your biggest risk in reading about God should not be a forty pound book smashing your face when you fall asleep reading it. Which brings us to my book, Night of the Living Dead Christian. It’s a comedy theology novel, and believe me when I say there aren’t a big heap of other books like it.

The story revolves around Luther, a man who struggles with anger and violent urges, who can’t control his base nature when he transforms into a wolf. His lycanthropy is having, as you can imagine, a detrimental effect on his marriage. His wife has finally, wisely, taken their daughter and moved out, and Luther realizes that he’s going to need to work harder to find a solution to his problem. He has tried self-discipline and psychologists and a hundred other solutions, none of which worked. And now there’s a werewolf hunter determined to kill him, so the question has become one not only of saving his marriage, but of saving his life. Luther teams up with a mad scientist, an android, a vampire and the local constable of the neighborhood watch to find some answers. And their first step is something more terrifying than he ever imagined possible… going to church.

Of course, unbeknownst to him, the first church they pick is a zombie congregation. Zombies versus werewolves! Things on fire! A robot Jesus! Psychologists! Pet zombies! Lutherans! Secret Lairs! Theology! Ice cream! At the heart of things, the book is about humanity, our desire to better ourselves and whether that’s truly possible.

I don’t know that I found a complete answer, but I had a lot of fun exploring the question.