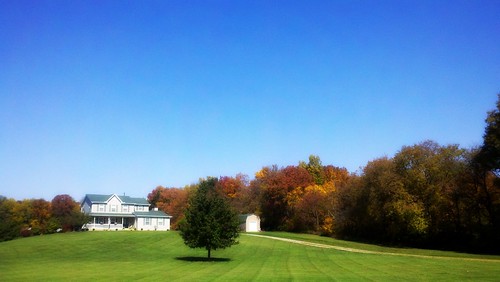 In case you were wondering. 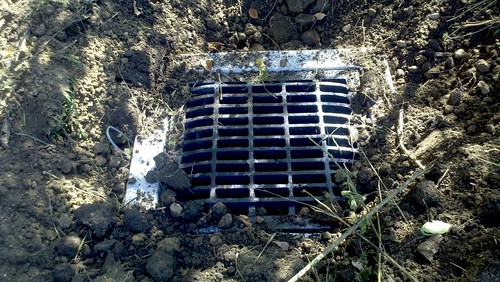 It’s a storm drain! It’s okay. You can be jealous.

It turns out that the drainage tile in our yard was mostly fine — a few crack and slips here and there but mostly good. The contractor fixed those minor things and then put in some additional storm drains so that the water could more easily get to the drainage tile, rather than go overland in our yard. We’ll see how it works the next big rain we have. Also, note to self: Remember to put keys in pocket around this thing.

For those of you who follow my Twitter feed this will be old news, but for the rest of you, The Bloggess has an object lesson on why Public Relations people would be well to remember that antagonizing bloggers is something you do at your own peril, and in any event, under no circumstances should you commit to text that you think one of them is “a fucking bitch.” Because then that blogger might, in fact, drop the Internet on your head. Way to go, BrandLink Communications, which will get to spend the next few days in damage control. This little contretemps reminds me of my own little skirmish with a PR firm a few years back, which ended up (or so I am told) with someone getting fired. Good times, good times.

To be clear, and as someone who both gets rather a lot of PR pitches and who is also from time to time the subject of PR pitches himself, the very large majority of PR people are perfectly decent people who are doing a particular and peculiar job as well as they can, namely, trying to raise awareness of their clients and their products to outlets that have a large or very specific audience. I don’t mind getting PR pitches in my e-mail; I even have publicity guidelines. When there’s something I’m interested in, I follow up and then both the PR person and I try to see if there’s some way to make both of us happy with the arrangement. If I’m not interested in something, I’ll just delete it and carry on. I suspect that’s how most people in this situation work. It’s usually a congenial thing.

What I find interesting about spit fight between Bloggess and BrandLink Communications is that the folks at BrandLink appear to have an inverted view of the relationship between their PR firm and the people they are pitching — which is evident when a vice president of the company, the one who called Bloggess a “fucking bitch,” also informed her that “you should be flattered that you are even viewed relevant enough to be pitched at all.” In other words, it’s the PR film doing Bloggess a favor by spamming her inbox with a press release that’s entirely irrelevant to her or her blog, rather than hoping she will do them a favor by mentioning whatever thing they are pitching (in this case, something to do with the Kardashians).

Dear BrandLink Communications and in particular Jose Marino Martinez, the fellow who typed those ridiculous words: You can’t possibly actually believe that, right? That you are doing any of us a favor by cramming our e-mail boxes with irrelevant crap? I don’t mind getting PR notes, as noted, but I wouldn’t miss getting the 99% of PR notices that aren’t actually useful or relevant to me. If my blog was viewed “not relevant” by the vast majority of PR folks who currently clutter my inbox on a daily basis with their missives, I’m pretty sure I would somehow find the inner strength and courage to go on. Being relevant to most PR people is not particularly relevant to me, or especially flattering.

I’m also frankly flummoxed this far into the reign of the Internet that these folks didn’t understand one of the maxims of the medium: The Internet is Looking for an Excuse to Drop on Your Head. The PR folks at BrandLink Communications were stupid to respond to Bloggess in any way other than “okay, we’ll drop you from our mailing list,” but they were even more stupid to think that their rude and obnoxiously smug response to her would not get out into the wild. Surprise! Meet the Internet. It’s kind of pissed.

What have we learned today?

1. Most PR people are nice folks just doing their jobs.

2. But some of them have apparently forgotten how the PR relationship actually works.

3. Those folks should still be scrupulously professional when dealing with the people they pitch to, especially if those they pitch to are bloggers.

4. Because if they aren’t, the Internet will drop on their heads.

5. And in any event, when in doubt, don’t call someone a “fucking bitch.”

I hope Mr. Martinez and the rest of the folks at BrandLink Communications have learned something useful out of all of this. If they haven’t, well. The Internet is still out there. And it’s climbing back up to a high perch.