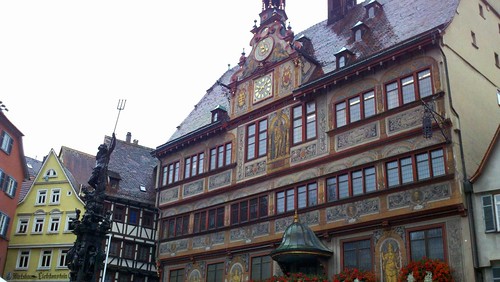 First: Dude, this town hall in Tübingen is both awesome and about 250 years older than my country. I still have a hard time wrapping my brain around that.

Second: Now that I am back home, a few more notes to wrap up my whole German tour experience.

1. Before anything else of note, I would like to take a couple of moments to give a sincere public appreciation to Carolin, my handler in Germany, who accompanied me while I traveled the country and made sure I was fed, sheltered and going where I was supposed to go on any particular day. I wasn’t entirely sure until a couple of weeks before the tour if I would have a handler at all, a fact which filled me with mild apprehension. To be blunt about it, I fairly certain my first act in Germany would be to get very very lost, take a train and end up in Romania or some such and then spend the rest of my life begging coins to get back the US. Thanks to Carolin, I avoided that fate entirely. And as a bonus, she was very good company, and tolerated ten days of near constant contact with me far better than most normal human beings would (seriously, most of you would have stabbed me in the back around day four. Trust me). So thank you, Carolin, my friend, for the company, for the help, and for not pushing me in front of a train at any point in time, when, considering how many trains we took while in Germany, would have been very easy to do indeed.

2. Likewise, thanks to every member of the US consulate service and every German-America Institute staff member who made such a fantastic effort on my behalf, and who made me feel welcome at every point during my stay. Miriam Jaster, who was the point person for bringing me over, I will single out for special thanks, but everyone was just tremendously nice and helpful, and my not naming every single person is more an artifact of the fact that right now my brain is like pudding than it is that they are not deserving of a name check. I hope you will all forgive me. Additionally, many thanks to the people at Random House Germany and Heyne for tagging in for the tour, particularly (aside from Carolin) my German editor Sascha Mamczek, who did a fine job moderating me in both Frankfurt and München, and with whom I had a number of good conversations about writing, about the business of publishing, and everything else. Lasers and spaceships to you all.

3. Also, you know. Germany. As I’ve noted before, I’ve been wanting to visit it for a long time (I even tried to be an exchange student in high school), so being able to go over, and do a book tour, at the behest of the United States government, even, was pretty much a dream come true. And Germany did not disappoint at any point — the people were fantastic, the country gorgeous (even when rainy) and no one pointed and laughed when I mangled the language; indeed, I was given credit for even trying. It’s definitely true that Germany is a fairly easy country for English speakers to travel through; English is as I understand it a required subject and almost everyone seems to have enough of it to understand you, and you them, if everyone makes an effort. But I did try to talk in German when I could, because, hey, it’s their country, might as well try. But when I failed, they allowed me to fail gracefully, which I appreciate.

I left Germany feeling even more positive about it than when I came in, and I was pretty excited when I came in. I will definitely be back at some point, book tour or not, because I would love to be able to show off the country to Athena and Krissy. Likewise, allow me to heartily recommend going to Germany for the rest of you. You won’t regret it.

4. And now, for no particular good reason, a picture of me eating an “Amerikaner,” a type of pastry: 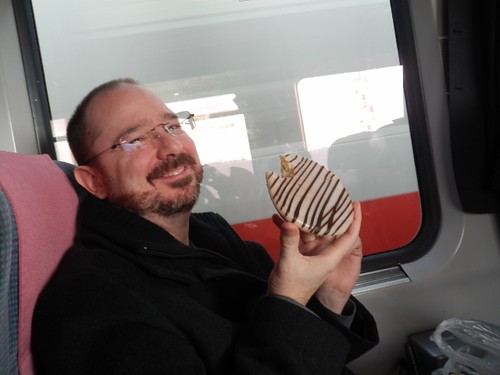 Yes, yes. “Ich bin eine Amerikaner,” and all that. As I noted on Twitter whilst I was consuming the thing, it’s amusing that the Germans have a pastry called “the American” and we don’t, much like, I imagine, Danes are surprised that we have something called a “Danish.” The Amerikaner, incidentally, is basically an large, bland, overinflated sugar cookie, which I must reluctantly concede is all-too-accurate as a metaphor for us as people, even though I was assured that, honestly, it wasn’t a comment on us at all. Sure it’s not. But it went down fine.

The Amerikaner was actually the most “American” thing I ate over in Germany, since I felt that if I was going to go that far across the globe, I might as well eat the local food, and not mewl like a smack junkie everytime I passed a McDonalds or Burger King, both of which were plentiful (as were Starbucks and Subways). So I ate a ton of heavy German food, and then promptly walked it off, because people over there walk a lot. There was some stuff which was enjoyable to try once but I won’t need to go back to again — blutwurst, I am looking at you — by and large I ate well, and was happy that I was not a vegetarian.

And yes, they had Coke Zero there. Yes, I drank it. Yes, it was good. Some things are constant, people.

5. On a similar note, a lot of the German folks I met who worked for the Consulate or for the German-American Institute had been exchange students to the US, and apparently they thing they all love the most about the country is Taco Bell. Seriously, their eyes would just light up when they talked about it. I was concerned about this at first — “Now, you know it’s not actually real Mexican food, right?” is what I asked them all — but they all understood that Taco Bell is to authentic Mexican food what a handful of Skittles is to a basket of fresh fruit. They just liked it anyway. And, well. As an ardent fan of the seven layer burrito, I can’t say I find this indefensible. So, note to self: The next time I’m in Germany, bring a stack of Taco Bell delights. I will be greeted with flowers.

6. You’ll all be amused to note that in addition to my role as science fiction author and American Writer on Display, nearly every day I was called up on to be Speaker to the Germans, answering questions about the United States, and particularly the state of our political system. Because, as you may imagine, Germans along with everyone else on the planet is mildly concerned about what looks like the general state of insanity over here. I was honest with them and told them that The Crazy was only going to get worse through the 2012 election, so they might as well get used to it. They weren’t especially happy about that, but then think of how I feel about it. They don’t have to live in the middle of it; I do. They were not notably sympathetic, which I suppose is fair enough.

And now I’m home and glad to be here, seeing my family and pets, all of whom seem happy to see me. Germany was wonderful and I wouldn’t have missed it for the world. But it’s also good to be back. For lunch, I think I’ll have Taco Bell.

55 thoughts on “Final Thoughts on the Germany Trip”