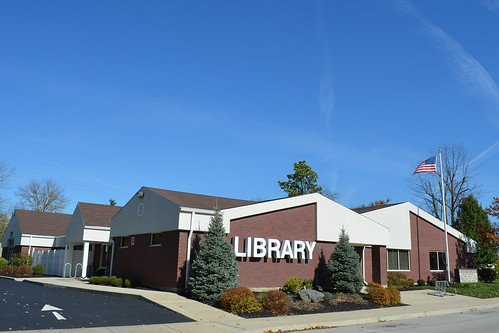 For those who were curious about the institution I had hoped to help last month with my Redshirts auction, here’s what the Bradford Public Library looks like (from the outside at least). It’s small but mighty, and also very helpfully labeled in large, sans serif letters, just in case one is confused as to what building it is. Over in the right lower corner you can see it has a sign out front; right now here’s what that sign says: 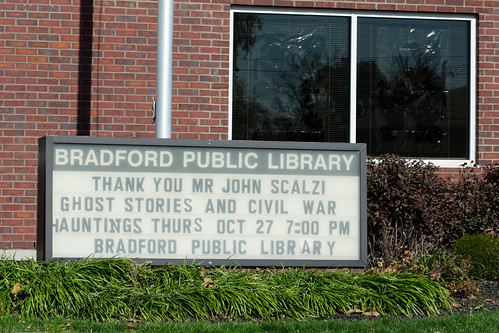 Aw, shucks. You’re welcome, guys. Although strictly speaking the thanks really should go to the two gentlemen who between them donated $10,000. They provided the money; I just pointed it in the library’s direction.

Speaking of which, now that I am returned from Germany I will be this week mailing the various books and goodies to the gentlemen in question, although a couple of them — the story, the pie and the black velvet painting, will take slightly longer to take care of. But the black velvet painting, at least, is in process (which means I’ve contacted an artist and we’re talking concepts). The story will probably happen later this year. The pie will occur next year at the 4th Street Fantasy convention, which I am assuming I will attend specifically to deliver the pie. The things I do, man. But in this case, totally worth it.

26 thoughts on “Meet the Library”