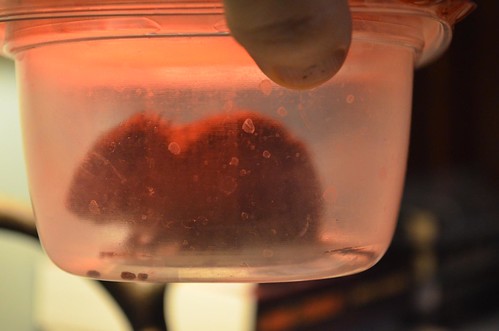 The shadowy form you see in this plastic container is a mouse, which I trapped in my bathroom after in fled from my dog, which only moments earlier had the poor thing in her mouth. She had been pouncing after the thing in the bedroom, which occasioned us learning that squeak toys are in fact modeled after the sounds that indignant rodents made when they are being hugged with a dog’s teeth. The dog was quite good at catching the mouse but didn’t appear to know what to do with it once the thing was caught, which is why the thing escaped from her, more than once.

It’s unusual to have a mouse in the house at all, because we have three working cats, all of whom we have verifiable evidence of being able to catch and disembowel creatures such as this. So how did this one get into the house? Why, the dog, who apparently caught it during its morning walk and then snuck it into the house to play with it some more. Krissy, who walks the dog in the morning, noted Daisy acting a little funny, cutting short the walk to go right to the door; now we know why.

This animal thus encased in plastic, I walked it out to the bushes and let it go there. Hopefully it will find its way home without further incident, and will learn in the future to avoid dogs. As well as cats and skunks and hawks and snakes and lawn tractors. It’s hard out there for a mouse.

50 thoughts on “Adventures in Mouse Trapping”