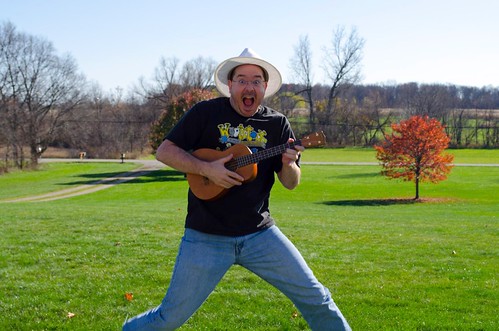 The ukulele, of course, not being a big thing, either physically or existentially, on the list of things I am thankful for. But not everything has to be big for you to be thankful for it, and my appreciation for the uke is genuine.

Possibly the best way to describe my appreciation for the ukulele is to make another comparison. It’s the 80s, and everyone has themselves a Rubik’s Cube. I had one myself, and I have to say I wasn’t particularly fond of it. On the surface it seems like I would be exactly the right sort of fellow to solve one of those things, and perhaps if I really put in the time to learn how to do it, I could have. But in point of fact I was both too lazy and too impatient, so in the end the way I “solved” my cube was to take it apart and reassemble it with all the colors in the right place. It was the Gordian Knot way of solving it, I would flatter myself by saying.

But! There was another one of those puzzles called the “Pyraminx,” and that one I could solve, no problem at all, probably because it had two fewer sides and was thus correspondingly at the correct level of challenge for someone who was as lazy and impatient as I was. Does this mean that I operated at a lower cognitive level than all those Rubik’s Cube solvers? Oh, probably. But, eh. The Pyraminx was fun for me, the Rubik’s Cube was not. And there it was.

Now: Take the guitar. I have a guitar, and have had one since 1990, and I can operate it at a level that is marginally above incompetent, which means I can strum out chords if I can remember where to place my fingers. But honestly, I’m not good enough to say to people, “yeah, I can play the guitar,” without feeling like a total fraud. Part of this is that I’m lazy and don’t actually put in the time required to get good, but the other part is that  suspect I’m just not at the right level of coordination. I’m bad at chording, which means I sound terrible, which disinclines me to keep at it.

But then there’s the ukulele, which is the Pyraminx to the guitar’s Rubik’s Cube. It has two fewer strings, which means a third fewer things to keep track of, and thus chording is commensurately easier. It’s also smaller, which for me seems to make a pretty big difference. And there’s the fact that as an instrument it’s pretty forgiving. You screw up a chord on a guitar and it sounds like hell. Screw one up on the uke, and it sounds cute and winsome. Basically, it’s the perfect instrument to just mess about with.

And that’s me: A guy messing about. I don’t have any illusions about my musical abilities; they are at best moderate — I can drum pretty well, and my singing voice isn’t horrible as long as I stay in my specific, limited range — and no one’s going to call me up and ask me to replace a musician in the middle of a tour. But I do like to play music, and I find having something to fiddle with is both restful and keeps me from being sucked into the computer 24 hours out of the day. For someone like me, the ukulele just plain works.

This is not to say that there are not people who can rock the uke with serious flair, mind you. It’s a serious instrument in the hands of serious musicians. But you can still enjoy it even if you’re not a serious musician. It scales to accommodate the player, is what I’m saying.

For me, I’ve been enjoying learning to play it and learning songs on it; I actually have a repertoire of songs that I can play without having to have the music in front of me, which has never happened to me before with a stringed instrument. Again, I will never play the uke professionally, but that’s not the goal. The goal is to enjoy playing it for its own sake and for mine. And I do. It’s fun to be connected with music that way. And, yes, I’m thankful for the ukulele for doing that for me.

I’m also thankful for it because the same qualities that make it enjoyable for me also make it enjoyable for Athena, whom I have given her own uke. We’re getting some nice father-daughter time out of it. Which is also something to be thankful for, as any parent knows how easily that parent-child time can get away from you. This helps keep it around. And sets it to music. I like that a lot. 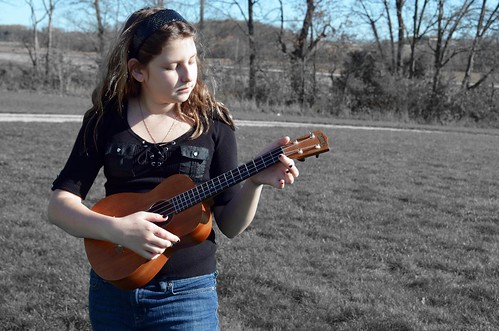 23 thoughts on “The Thanksgiving Advent Calendar, Day Four: My Ukulele”