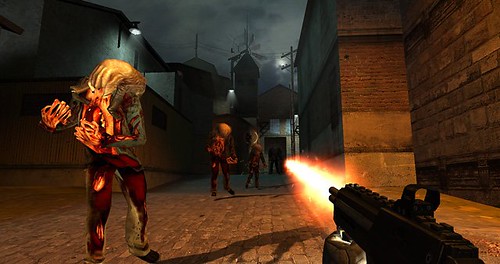 Old Man’s War is my most famous novel to this point and one of the things that people like about it is that its structure and tone angles back to the “golden age” of science fiction — the review of the novel that Tor plasters on the paperback cover proclaims it reads like a Robert Heinlein original, which is about as “golden age” as you can get. The observation is true; the book reads like “golden age” writing because I like that style and I wanted more of it, and if no one else was going to do it the way I liked it I was going to have to do it myself. But there’s another, very significant and much more modern, influence on its storytelling as well: First person shooter video games.

Before I get there I have to explain a little bit about why I like first person shooter video games more than any other type of video game. The first reason: I use video games for recreation and when I do that, I don’t want to have to do a lot of thinking. I’m glad people like strategy games and role playing games and all the other sort of games that make you engage your brain to keep track of inventories or whether your Sims are happy with you as the mayor, or whether you need to go to war with the Hittites or whatever. Enjoy that.  What I want to do is be moving and kinetic and shoot lots of things and have things explode and have discrete missions that have a beginning, middle and end and don’t make me think all that hard because, dude, that’s what I do all the rest of the day. I’d rather headshoot a zombie than build a civilization.

The second reason: First person is far more immersive for me than the games in which the player is represented by an entity onscreen, whether it’s a person or a spacecraft of a ball of goo or whatever. When I play a video game, I don’t really want to play as Mario or Lara Croft or Desmond Miles or Niko Bellic or whomever. I want to play as me. Now, in first person games you’re still often supposed to be someone else, like Gordon Freeman or Master Chief or Chelle. But in point of fact you’re playing the game from the point of view of you — eye level with no object in the way of interfacing with and navigating through the game world. The characters can call me Gordon Freeman all they want; I know I’m me.

This makes a huge perceptual difference. Things are more exciting when they are happening to you and not some representation on the screen; the scares are scarier, the accomplishments more satisfying, the frustrations much more frustrating. I fully grant that some games and some game genres are better in something other than first person, but generally speaking, as noted, those games are less interesting to me because of it. I think of it this way. It’s the difference between remote control piloting an X-Wing, and being in the cockpit yourself. When it comes time to descend into the Death Star trench, where do you really want to be?

Back in the day, first person shooters were not necessarily known for their stories — early versions like Doom and Quake and Descent were all about the shooting, killing, occasionally finding keys and getting the hell out of the dungeon — but it’s a mistake to see them as being storyless, and it’s also a mistake to suggest there was not effective storytelling. The original Half-Life in 1997 was famously scripted by an accomplished novelist, Marc Laidlaw, who rolled out the story as the game progressed, for example. Other first person shooters of the era also tried their hand at telling a full, compelling tale as the player went along; two that stick out in my mind were Clive Barker’s Undying and Requiem: Avenging Angel, not to mention System Shock 2, which scared the living crap out of me at the time. These days it’s more unusual for a shooter not to have a story than to have one, and these stories are often as engaging as any you’ll find in a novel — not in the least because game studios are now frequently following Valve’s lead and hiring science fiction novelists to plot out their stories.

So when it came time for me to write Old Man’s War, what did first-person shooters teach me as a storyteller? First, to keep the story first person — I wanted readers to be looking through John Perry’s eyes the whole time and feel like what was happening to him was happening to them. I didn’t want them to be standing over his shoulder and having an opportunity to distance themselves from what he was going through. It’s not to say that third person storytelling can’t be effective — note The Ghost Brigades was third person, in part because I wanted the separation between the reader and Jared, the main character — but for their first time in my universe, I wanted my readers to be immersed in it exactly as much as John Perry was, to feel what he was feeling.

Second, to keep things moving, and to make each chapter its own “level” — that is, to have each chapter have its own achievable goal even as it led through to the overall story development and plot climax. Essential information and equipment is doled out when necessary, exposition kept to a minimum and always in the service of keeping the reader moving through the story, and any chance of letting people get sidetracked kept to a minimum, lest they wander off and get bored. This way — and as with good level design in a shooter — every chapter had its own little payoff, and at the end of each John Perry (and by extension, the reader looking through his eyes) “leveled up” in some way. Not every story has to be told this way — that would get boring, fast — but it sure worked for what I wanted Old Man’s War to do.

The more observant of you will note that the fundamentals of storytelling in FPS games are not actually that much different than what is often suggested for novels, and you would be correct about that. But I do think first-person shooter storytelling, when it’s working, boils these precepts down into a highly concentrated form that has more of a visceral impact. In regard to how it applies to Old Man’s War, it helped to bring a modern sense of narrative propulsion to the “golden age” format I was working in. Indeed, you could say that in this particular storytelling argument, the thesis was a Heinlein-like story, the antithesis was first-person shooter narrative dynamics, and the synthesis was Old Man’s War. Hegel would be proud, and I suspect excellent at headshots.

(I’ll note also that OMW gave me an opportunity to fix one thing that really bugs me about first person shooters, which is characters walking around with a ton of weapons and ammo and still able to, you know, move. From this kvetch came the MP-35, which thanks to advanced nanobot technology could give you all the benefits of a rifle, a shotgun, a grenade and rocket launcher, a flame thrower and a particle beam weapon, all in a single piece of armament! And yet FPS characters are still walking about with 43,000 weapons on them. Sigh.)

I’ve noted before that one of my goals before I leave this planet is to write a video game myself. Specifically, I want to write a first person shooter, because I think it would be cool, and because I think there are certain things I could bring into the storytelling, from the novel world, that aren’t there now (or more accurately, I suppose, which I have not seen yet). Dear game makers: You know where I am. Call me.

In the meantime, I’m thankful to first person shooters, not only for helping me write the novel that put me on the map, but also for giving me a way, at the end of the day, to shut off my brain, run around and shoot the crap out of everything I see.

Speaking of which, I’m off now. Those zombies aren’t going to shoot themselves, you know.