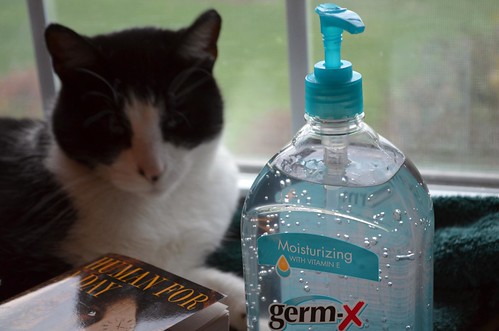 There was this one time I was on a book tour, and I shook hands with someone in San Diego, and the next thing I knew I was in Minneapolis. Which would be fine, except somewhere in there I was also in Phoenix. I gotta tell you, I have almost no memory of being there, due to one of the gnarliest cases of 24-hour stomach virus that I had ever encountered. I mean, I must have been in Phoenix, and I must have done an okay job when I was there because I didn’t hear of anyone complaining about me. But, yeah. Really, just a blur.

That’s when I joined the cult of the Hand Sanitizers.

Look: I do a lot of travel. And I do a lot of travel to events where I am in close contact with a whole bunch of people, like conventions and bookstore events and conferences and book fairs. And when I am there, I am touching books that other people have handled, pens other people have handled, and hands attached to people. Sometimes people want hugs and sometimes when they ask for pictures they put their hands on me — not in a weird grope-y way, mind you, but still, there’s some physical contact. Some of these people — not you, of course — have colds or something worse. Some of these people — definitely not you — have questionable hygiene.

And thus I would often find, having gone to a convention or other event, that I would come home with a low grade something, and occasionally a high grade something. In the case of the latter, I would be out of commission for at least a couple of days. In the case of the former, I would feel like crap for at least the same amount of time. Mind you, it’s not just me and my oh-so-delicate immune system. This sort of thing happens enough that there’s a name for it : “Con Crud.” No, it’s not that science fiction fans are dirty, germy people. Well, it is, actually. But they are no more dirty or germy than anyone else. When you get any large group of people together for several days, they’re going to swap viruses like business cards. And because I belong to the class of people at conventions/conferences/book fairs/etc who constitute the entertainment, I come into direct contact with more people than most other folks.

I don’t want to get sick every time I go to an event. At the same time, I don’t want to keep myself distant from the folks who have come out to see me; aside from my own gregarious nature it’s just not good business. So these days, after book signing or other event where I’m socializing and touching people and things (and vice versa), out comes the hand sanitizer, and there’s a thorough rubbing of my exposed surfaces. Yes, that sounds a little dirty, doesn’t it. But in fact it’s the opposite of dirty, which goes to my point.

I and some other of my friends in the same position in terms of the public are aware sometimes people get offended if they see the hand sanitizer come out. This is one reason why I try to wait until I’m done socializing. But beyond that, here’s the thing. If you see me or someone else pull out the Purell or Germ-X when we’re having contact with you, it’s not that we’re saying you’re dirty. We’re saying that all that personal contact we’re having adds up. You’re going to like us better a) if we’re not sick and b) not passing along a petri dish worth of germs that we’ve gotten from everyone else at the event. We’re doing it for you. And for us. Mostly for us. But for you too.

Does it work? Yes it does. I’ve been using hand sanitizer pretty religiously for a few years now and I’ve noticed my incidence of being laid out by illness after an event has gone way down since I have. It doesn’t always work; for example, I got sick when I was Germany despite hand sanitizer. But then I was at the Frankfurt Book Fair, in close proximity to hundreds of thousands of people. A dab of alcohol-based gel can only be expected to do so much. Otherwise, yes. The stuff usually works.