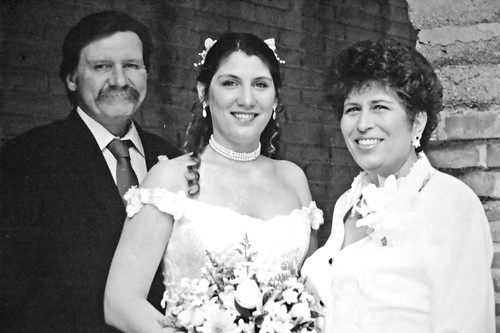 No, I’m not trying to suck up to my in-laws. I’ve been in the family for sixteen years, dating back to the day this picture was taken. We’re waaaaay past the sucking-up stage, I have to say. I have the wife! And the child! They can’t be taken away now! Bwa ha ha hah ha ha ha! Actually, I don’t want to test that proposition, since it would involve shovels, a dark hole in the ground, and an entire clan of tight-lipped Ohioans. “Hey, didn’t Krissy have a husband at one point?” “She might have.” “What happened to him?” “Couldn’t say.” And that would be that.

But none of that is in the offing, so to speak. I’m noting that I’m thankful for my in-laws Mike and Dora because, quite simply, I genuinely like them and am appreciative of them in all sorts of ways great and small. A small way: When Athena was younger and Krissy and I wanted a date night, they were happy to babysit. It’s not a big deal, but date nights are, actually — it’s nice to be able to spend time with your spouse and just your spouse. Another small way: Dora is a fantastic hostess and if you escape her house having consumed less than 18,000 calories you may have gone to the wrong house. Yet another: Mike mows my lawn. Actually, that’s not small, since my lawn is five acres.

One not so small way: I keep them in mind when I’m writing my novels. Neither of them is generally a big science fiction reader — he likes history and she likes Nora Roberts and Julie Garwood — but both of them read my books, because, well, I’m their son-in-law. And I want them to be able to enjoy them. So when I write I ask myself if whatever science fictional concept I’m playing is being written in a way that my in-laws will follow. This is emphatically not the same as dumbing down the writing — these aren’t stupid people — but is a way to remind myself that not everyone knows the last 30 years of science fiction literature, and that it’s worth it to bring those folks into the story when it’s possible. I don’t write for Mike and Dora (or other non-sf readers) specifically, but I try to write for them too. I think that’s made a material and positive difference in my career.

One very big way: The ways in which I see the both of them in my wife. From Dora there’s her considerable wells of understanding and empathy, a desire to make people welcome and comfortable in her home, the warmth of her friendship and an extraordinary reservoir of stubbornness which makes her a force to be reckoned with. From Mike there’s her stillness and reserve, a thoughtfulness that most people lack, her no-nonsense straight-line thinking that makes her the person others turn to for help and advice, and the personal strength of character that makes her the rock her family — and I, certainly — have built their foundation upon. And also, I suspect, her physical strength, because, damn, that woman is strong.

It’s a pretty nifty thing to see the things ones admires in one’s spouse and be able to trace them back to the parents; it means it’s not just a lucky thing they’re there. I can see some of these same qualities developing in my daughter. I don’t wonder where they came from.

Plus, they’re just good people, and really, that can’t be appreciated enough.

18 Comments on “The Thanksgiving Advent Calendar, Day Fifteen: My In-Laws”