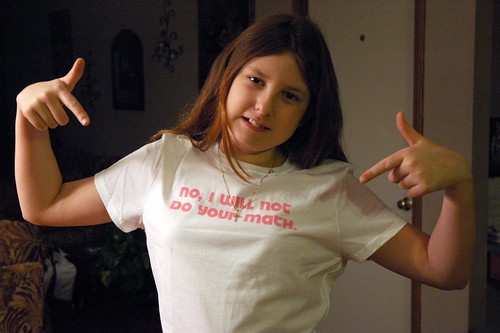 That’s right. Quadrate your own equation, if you please.

(Note: I’m aware “quadrate” is not a verb. It’s a funny, involving words. Thank you for your concern.)

Now, she might help you with your math, so that you can learn how to do it yourself from that point forward. Because she’s cool like that. And you know what they say: Do someone’s math, and their homework is done for one day. Teach them how to do math, and the universe isn’t a big unknowable ball of superstitious fear anymore. Or something like that. I may have garbled the specifics.

And yes, Athena wore it to school today.

If you’d like the shirt for the math-positive young women you know, you may buy it, no surprise, from the fabulous nerds at ThinkGeek. And if you’re thinking that this shirt may be a laudable correction for this particular piece of crap, you may be correct. This is evidenced by the text on the t-shirt page which reads, “You know what we’re too pretty for? Putting up with anti-intellectualism.” That’s for damn sure. Good on ThinkGeek.