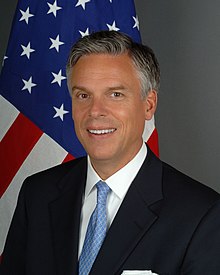 To whom? you ask. Or maybe you don’t, as you naturally assume I will spend money on the candidate I expect to support in the general election. In which case you’d be wrong: I just sent $50 to Jon Huntsman, who is aiming for the GOP nomination for President of the United States.

Why? Because while I am at this point highly unlikely to vote for a Republican for president in the general election, the simple fact of the matter is that for the health of the US body politic, I would prefer the GOP nominate someone who is not completely batshit insane, either personally or in their policies (or both). Jon Huntsman does not strike me as completely batshit insane. Indeed, he strikes me as kind of the opposite, which is positively refreshing in the GOP field as it is currently constituted. I’ve noted before I have serious political issues with the man, but his track record in politics suggests to me that this is a guy who doesn’t inherently see people with other views as enemies to be nuked until they glow.

Mind you, if I wanted to be completely Machiavellian about it, I would have sent my $50 to Newt Gingrich, a man who confuses his inability not to say whatever entirely appalling bit of self-pleasuring wonkery that pops into his head at any one moment with being a sober and serious generator of statecraft, and who is unfathomably at the top of the GOP polls right now. The idea of the President being paired off against such a malevolent doughboy must fill Obama’s political strategists with glee.

However, I don’t want that. What I would actually like is two candidates I don’t see as entirely unfit for office (note I say “I” here — I’m not particularly interested if you agree with my assessment) go and have a presidential campaign that doesn’t make me feel like it’s being waged at the level of two second-graders sticking their tongues out at each other and talking to me like I jammed a cake mixer into my brain and clicked it over to the “high” setting. I figure a Huntsman/Obama election race is my best chance for a campaign that does not actively make my country stupider, either before or after the election.

If I believe it, I should probably support it. And so: $50 to Huntsman. If my contribution keeps the man in the race incrementally longer, bettering his admittedly terribly long odds of making it through the primary season, then good on me, I suppose. I don’t imagine this strategy of mine will make Democrats/liberals/Obama supporters happy, but you know what, if the feeling on the Obama side of things is that the only way he can win is against a foamy, ignorant ideologue whose election would almost certainly damage the country, then the President has other problems, and those should probably be addressed first. As for me, I don’t think you should let foamy, ignorant ideologues close enough to the presidency to possibly win it. Their track record of actually showing up in the Oval Office when they are is depressingly good.

Do I think Huntsman will make it out of primary season? Not really. I think when all is said and done, the GOP is going to go Romney, a fact which I suspect has Obama’s people rubbing their hands in delight almost as much as the prospect of going up against Gingrich (or Cain! Holy God, Cain!) might. And that’s the GOP’s karma. I’ve done my part by supporting the one GOP candidate in the race I think could offer a viable alternative to Obama. Whether they listen to me — a generally liberal fellow who nevertheless prefers thoughtful, pragmatic conservatism to the nest of crazy that the GOP currently appears to be — is up to them. I’m not going to wait up for that.