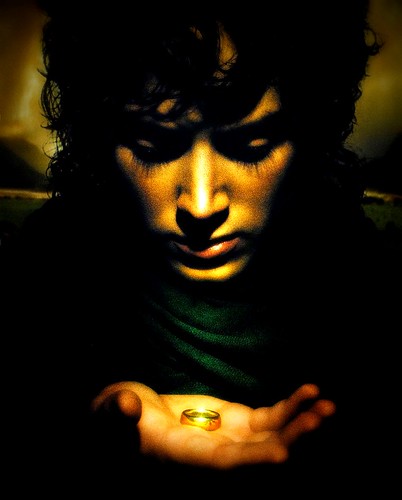 Last night both my wife and child were out for the evening and I was alone with a Lord of the Rings movie marathon on Encore, and access to Twitter. What happened next will be revealed, behind the cut.

Oh, hey, a Lord of the Rings movie marathon. Suddenly all my plans for industry fall to the wayside. #TheBloodOfMenIsSpent

“The Mimes of Moria” is the name of my next band.

Wife is at a rock concert tonight. I’m watching cable TV at home. Thus are illustrated the differences between us.

OSHA clearly has no jurisdiction in Moria.

Thanks to the Lord of the Rings, I always think of Kazakhstan as having Balrogs.

“You shall not pass!” — The Balrog’s algebra teacher.

I just realized that if you wanted to be a rebel in Lothlorien, you would wear bangs.

I’m imagining a Ken Burns’ documentary of the events in The Lord of the Rings.

Cue the long pan of the Alan Lee artwork.

It is odd to think it’s actually been ten years since “Fellowship of the Ring” came out.

The Two Towers is now on. I hold the minority view that it is the best film of the trilogy.

That said, I’d’ve trimmed back the ent scenes pretty severely.

I SWEAR I did not realize I was making a tree pun in that last tweet.

I am suddenly aware of just how little difference there is between Orlando Bloom’s Legolas and certain sparkly vampires one could name.

Orcs vs. Stormtroopers. GO. On second thought, never mind. Neither side aims well enough for it to be interesting.

And now for no good reason the image of Legolas with a Justin Bieber haircut just popped into my head. I’m sorry.

A name like Grima Wormtongue should have been a tipoff.

On the other hand, the name “Rasputin” meant “Debauched one,” and that didn’t stop Nicholas II. Conclusion: Kings are dumb.

I wonder what dentists think when they look at Orcs. I suspect “that’s a sailboat right there.”

They could have just distracted the Wargs by throwing a bunch of red bouncy balls and yelling “fetch.”

Specifically one thing that bothered me about the Ent scenes is the the green screen is qualitatively less good than elsewhere.

Now we’re at the “We paid Cate Banchett to be in this film so we might as well use her for exposition” scene.

Everyone in Middle Earth writes in the same font. THAT’S JUST NOT REALISTIC.

Dear world: I am deeply disappointed there is not a dubstep version of the Smeagol Fish Battering Song.

Frodo just admitted to being in a same sex relationship with Gollum. Sam will kill him!!

Dear Aragorn: go right ahead and pose heroically on a mountain top. No rush to get to Helm’s Deep. It’s not like an Uruk army is coming.

Every time an ent is on the screen I think Robert Plant gets a tingle.

Related: the dude outfitting Theoden looks like David Gilmour. I want him to break out the solo to Comfortably Numb.

Now Aragorn is trying to cheer up the boy who has been chosen for the Hunger Games.

The men of Helm’s Deep are saved! The League of Bowie Impersonators has arrived!

All the elves look like they really could use a low-tar cigarette right about now.

For those of you who don’t know, there’s a very Helm’s Deep-like battle sequence in “Kingdom of Heaven,” also starring Orlando Bloom.

Dear sound effects people: The Wilhelm Scream is the Rickroll of your industry. Time to retire it.

Helm’s Deep explosion: One of the top five explosions in film history. Discuss.

The Legolas Arrow Eye Stab never gets old. The shield surfing, however.

Now at the scene where elf is stunned that someone as pretty as he can die.

The Two Towers may have the most neck wounds of any film ever made.

I wonder what ents do when they come across a book. I imagine there’s a lot of screaming.

The ents are marching, first to Isengard and then to a Phish concert.

I strongly believe Theoden could benefit from mood levelers.

Gimli is taking to that horn like it’s the world’s biggest hookah.

The horses of the Rohirrim: “You want us to gallop down WHAT?”

Burning ent putting himself out in the flood: Still cool.

Mordor’s going about it all wrong, incidentally. Harness all that geothermal energy, sell it to the humans, LIVE LIKE KINGS.

Movie done. I wasn’t intending to livetweet it incidentally. It’s just that I’m ALL ALONE. With a computer. And cable TV.

And yes, Encore is showing Return of the King next. So if you’re sick of the tweets, probably best to unsub for the night.

The very first time you ever see Smeagol he’s impaling a living creature, so its not as if what happens to him afterward is surprising.

The One Ring is bad for your teeth. Pass it on.

Sitcom proposal: Frodo and Sam are roommates, Gollum is their cranky landlord. Gandalf as the wacky neighbor with a cat.

Merry and Pippin having a spat. They’re adorable.

It must be tiring to be an elf and always have to walk in slow motion.

They are reforging the sword of the king. Which will be given to Connor McLeod. IN MY CROSSOVER FANFIC #AragronConnorSlashFTW

Let’s be honest and admit that Gandalf’s people skills leave much to be desired.

I knew Osgilliath was doomed when the Starbucks closed up. All 16 of them #OrcsHateCoffee

And yes, that would make the Eye of Sauron the Red Ring of Death.

Also, I don’t care if they’re evil, I want a Nazgul.

Say what you will about the Orcs, you don’t get be one of their leaders just by having a nice head of hair #MeritocracyIsUgly

Of all the Hobbits, it’s not entirely surprising that Pippin is the one that starts fires.

I wonder what horrible thing you have to have done to be assigned to Beacon Patrol.

This may be a bit of futconning, but I think Eomer would be even more awesome if he spoke like Leonard McCoy.

Gandalf, walking around with that Nazgul repellent in his staff, only thinks to use it once. #NotATacticalGenius

We are now at the scene that suggests that Thanksgiving at the Steward’s House is never not awkward.

If I were Sam, I would not be sleeping that close to a cliff edge with Gollum around.

We’re at the emo-est parade ever. “You’re all doomed. Here’s some flowers.”

It’s nice that in Middle Earth you can become Steward of Gondor without ever learning to chew with your mouth closed.

Aragorn will not be wanting to swing that sword around in a thunderstorm.

We’re at the “Eowyn discovers that proximity does not trump a hot elf” scene.

Also, for those who asked: I am totally sober right now. Believe it.

The whole city of ghosts part here is a little too “Haunted Mansion” for me.

Given the sooty barrenness of Mordor, the support logistics of the orc army are being seriously glossed over here.

Once again: Gandalf — not a people person. #WhatDenathorNeededWasAHug

That Orc general is badass. Good looking, too, in a John Merrick sort of way.

If Gandalf would only use his Magneto powers, this whole battle would be over in, like, a minute and a half.

It’s out of character for Sam not to have collected up the Lembas bread before he ran back up the mountain in a rage.

You know what would kill Shelob, don’t you. A good hard whack with “A Dance With Dragons.” #ALargeBookIsComing

Frodo, Gollum and the rest are easier to understand if you think of this movie as Peter Jackson’s remake of “Requiem for a Dream.”

It says something about me that I have no problem with a 10 foot spider but I get annoyed that it has a stinger.

Theoden’s speech to the troops is pretty damn fatalistic. “Everyone! We’re going to die! Whoooo!”

Denethor falling from a great height ON FIRE is why Peter Jackson was destined to make these films.

Here come the Oliphants. In the super-extended version, the riders of Rohirrim counter the Oliphants with T-Rexes. It’s a true fact.

Wow, things are going terribly for the defenders of Minas Tirith. If only some sort of Deus Ex Machina would show up to save their bacon!

Oh look! A Deus Ex Machina in the form of an unbeatable ghost army! That’s convenient.

Seriously, that flail? It’s like a chandelier on a chain.

Eowyn is No Man! And somewhere Odysseus is considering a copyright infringement suit.

We’re at the “Eowyn and Theoden recite Luke and Vader’s lines from Jedi” scene.

Hope the people of Minas Tirith like Oliphant barbeque.

Aaaaand now we’re at the point where one goes “wow, this movie is still going?” no matter how much one is enjoying it.

Sam is dedicating his murders to friends and quipping as he stabs people in the back. How far he’s come.

Also, Sam as ringbearer is like the tribute band singer who replaces a front man in the real band. He knows it won’t last.

Mount Doom: The name’s a little on the nose. You’d think someone would have suggested rebranding to “Mount Pleasant” by now.

Every time the Orcs march I start hearing the Flying Monkey March from Wizard of Oz in my head.

I *did* warn people I would be tweeting a lot tonight. Don’t worry. It’s just until this movie ends, seven hours from now.

It never actually ends, you know. One eventually just leaves to go pee.

You have to give Gollum credit for persistence. His can-do spirit is what America needs in these hard times. #Gollum2012

We’re at the “Frodo’s paid the florist and the caterer and everyone’s at the chapel but he still can’t commit” scene.

And then Gollum comes along to steal the bride. #ItsAllInTheSubtext

I’ll say it: Gollum and Frodo’s slap fight? Embarrassing for them both.

But of course there’s Sam to swoop in for the rebound.

We’re at the “Sauron’s Tower clearly not built to code” scene.

Sam and Frodo have a bubble of conveniently non-superheated air around them. Which is a lucky thing!

We’re at the “Sam’s deathbed conversion to heterosexuality” scene.

At the “We’ve told Bilbo he’s going with the elves, and at his age that’s what the nurse’s aides at the home will look like” scene.

Aaaaaaand now I’m done tweeting the movies. Tell the people who unfollowed they can come back now.

64 thoughts on “Lord of the Tweets”