Second: A selection of sunsets from 2011. Enjoy. 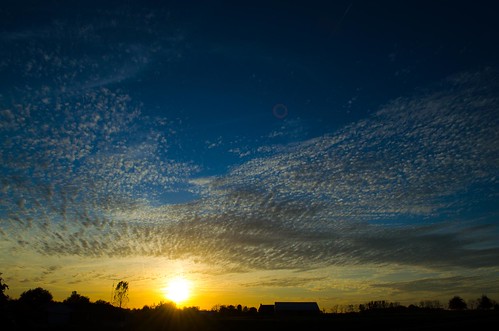 Third, have a sunrise. Because you deserve it. 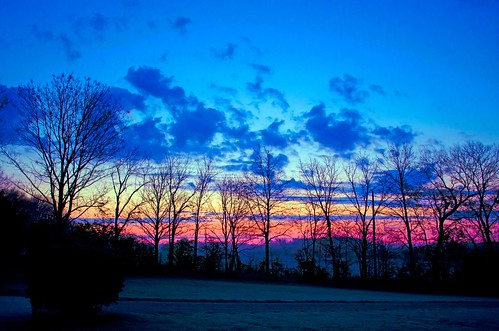 In all, another good year for that great big ball of plasma in the sky.

Adam Christopher’s debut novel Empire State isn’t just a novel — it’s the start of an interesting initiative by his publisher Angry Robot to let readers into the parallel New York Christopher has created. Christopher’s own journey to the Empire State was a long and twisting one itself, spanning continents and book genres in equal measure. He’s here now to talk about his travels: where he’s been, and where his creation will go next.

There, I’ve said it.

Well… that’s not strictly true – when I was about seven I had three comics: an issue of Batman, an issue of Iron Man, and one of those big Marvel A-Z compendium things. I was utterly fascinated by that, and read it from cover to cover and back again while telling my mum I was going to write a comic one day. But me and comics grew apart, and weren’t to meet again for about sixteen years when in 2003, I decided to pick up an issue of the British weekly SF anthology comic 2000AD. I remembered a friend at high school reading them under his desk at the back of class a decade before, and I remembered him showing me a one-shot story about Marconi inventing the radio to talk to his dead brother. That startling story had stuck in my mind, and when I stumbled across the latest issue on the shelf, I knew I had to take a look.

I was hooked. Instantly, shazam! I swear that a bolt of magical lightning struck right there in the bookstore as soon as I turned the first page, but unfortunately I still can’t juggle Buicks so that might just have been in my head. But it was a life changing moment. From 2000AD I discovered American superhero comics, and I knew there is where I belonged, that’d I’d come home. Although a latecomer, comics are now a passion for me as strong as genre fiction.

Empire State is my debut novel. It’s a science fiction detective story, a noir with superheroes set in Prohibition-era New York and another place, a foggy, wet and thoroughly miserable alternate version of Manhattan called the Empire State. It’s a book about identities, loyalties, justice, and trust. Its hero is a down-and-out detective in the Empire State, who gets called to investigate a missing person but ends up detecting a parallel universe – ours. There are rocket-powered crime-fighters, there are giant airships made of iron, and there is a conspiracy that crosses dimensions.

The first seed of Empire State was sown on a flight from Manchester, England, to San Francisco sometime in 2009. Y’know how it is on long-haul flights – it’s boring, uncomfortable; you get dehydrated and sleep-deprived. It was on that trip that I read my first Raymond Chandler novel, The Big Sleep…

Shazam, again. Magic lightning at 36,000 feet. The Big Sleep blew me away – sure, Chandler was a pulp writer, sure contemporaries called him a hack, pointing to his embarrassing past writing for mystery magazine Black Mask. But boy, could he write. So as we cruised onwards to California and I drifted off after perhaps one too many free champagnes, I remember lamenting the fact that while Chandler was a heck of a guy, it was a shame he never wrote science fiction. Raymond Chandler with robots, I thought. Wouldn’t that have been swell?

Somewhere over the Atlantic, the Empire State was born.

At that point, I’d written two novels already – a horror steampunk thing that is (perhaps wisely) still in the trunk and an all-out widescreen superhero epic called Seven Wonders, which Angry Robot is, oddly enough, publishing later in 2012 after Empire State. I was ready to start the next project and try something a little broader, a little weirder. Something which included a little of everything I liked – comic book superheroes, a bit of steampunk, a lot of weird science fiction. And, thanks to the adventures of Philip Marlowe, I knew I wanted to write a pulp detective.

It wouldn’t work, I thought, couldn’t work. I was ready to shelve it and move on, but a chance encounter with a mistyped Amazon search query gave me my hero: Rad Bradbury, later to become the slightly less distracting Rad Bradley.

With that slip of the keyboard, Rad appeared fully formed in my mind – here was a pulp detective, an ex-boxer who is older now and a little gone to seed, and he knows it but that doesn’t stop him doing his darndest to make things right. Rad likes his drink and hates Prohibition, but he believes there is something good in his dark and dull home city, the Empire State. A hardboiled fighter of injustice not afraid to use his fists when needed. A straight-talker who doesn’t like being messed around.

The perfect star for my science fiction detective novel.

And then it all made sense. From Rad came a whole bunch of new connections I’d never seen –  how pulp detectives truly belonged to the 1930s, exactly the same era in which the superheroes of the Golden Age of comics first took flight. Throw in Manhattan trapped in the weirdness of Prohibition, with bootleggers and gangsters, fast cars and Tommy guns, and then take the whole shebang and exaggerate, extend, twist, until I got a decayed, corrupted parallel universe reflection of New York City. The Empire State.

I had my Big Idea. “Raymond Chandler meets the Rocketeer in Gotham City” might be a bit of a mouthful for an elevator pitch, but it sure did fit. I began to write…

A year later and I sold the finished book to Angry Robot, who turned out to have their own Big Idea. Empire State would be the first novel to be used for Worldbuilder, a creative commons-licensed “expanded universe” project managed by the mighty Mur Lafferty. With Worldbuilder, readers can contribute their own creations based around and set in the world of Empire State – fiction, art, photography, comics, music, radio drama, you name it – the best of which will be selected for inclusion in a series of quarterly anthologies. We’ve also got some professional friends involved: Hugo-award winning writer and puppeteer Mary Robinette Kowal is doing a toy theatre/puppet show; acclaimed writer James Patrick Kelly is doing a short story; there’s a tabletop RPG being constructed, while a photographer has unearthed stills from the long-lost 1946 film noir adaption of the book. And that’s just the beginning.

It’s going to be wild. From an accidental birth, Rad Bradley is going to have adventures beyond the reach of my keyboard.

Because it means I get churro-derived breakfast cereal. Athena and I both spotted this box in the store, said “Dude! Churro cereal!” almost simultaneously, and lunged for the box. I got it first because I still have the slightly longer reach. But I will share it with her, I promise. Regardless, it is truly an age of miracles and wonders.

I could go on about how a churroesque breakfast cereal is a testimony to the growing cultural and financial power of the burgeoning Hispanic market in the US. But then I would need graphs and charts and an easel. What I can tell you is that churros are fantastic and that having them even in denatured breakfast cereal form makes me happy. So thank you, Hispanic America, for being enough of a purchasing force in the US that I got to eat these this morning. You rock.