Now that Lock In is done and sent into its editor, some thoughts on writing the book.

1. It was a challenging book for me to write. For one, it’s near future, which is not my usual thing, and which presents its own set of challenges, notably that you want to reasonably extrapolate future technology from existing technology without letting current technology overrun you. For two, it takes place in a short span of time (roughly six days) and during those six days a lot has to get covered; no one in this story gets much in the way of sleep (including its author).

For three, it’s explicitly designed to be a thriller with a technological aspect — not a technothriller in the Tom Clancy sense but one in which people use technology to get what they want, and they know their way around the tech pretty darn well — and that has to be balanced with making the people in the story worth caring about. Finally (and for four), I wanted to place a complete story within a world where things are socially and technologically in flux; the story is a snapshot of events within a larger context, and that larger context, while informing the story, goes on nearly heedless to the story’s event.

Oh — and it needs to be fun to read, with occasional murders and explosions and intrigue and maybe even some snappy dialogue dropped in here and there. You know. As you do. Plus there are other things I am trying in this story which I don’t want to reveal at the moment.

And it had a hard deadline of the end of November, because it’s coming out in August, and we need that time for editing, revisions (if any) copy editing and marketing.

Which is not a bad thing, mind you. I think it’s a good thing for me to try to be ambitious with the things I write. You may or may not like what I write, depending on your tastes, and you may or may not think I am successful at hitting what I’m aiming for, again, depending on your tastes. The one thing I would prefer you not to think, whether you like what I do or not, is that I’m just hacking them out without my brain engaged. That’s not the case, I can assure you.

2. As an example of how this book decided to fight me, I’ll note that I wrote roughly seven chapters of the book with one set of protagonists and then realized that, in fact, these two protagonists were actually supporting characters and the actual protagonist was over in an alternate universe, being all protagonistic. So I had to go find that alternate universe and start writing in it. Fortunately it was right next door. Unfortunately, I could only repurpose about 20% of what I had already written when I did. So, pretty much back to the drawing board.

This was annoying but I would not say it was a total waste of time. A lot of worldbuilding got done in those seven chapters, and that worldbuilding was transferable. I had a much clearer idea of everything involving the world and the story I was running through it — including the fact that my former protagonists weren’t getting the job done. They weren’t fired — it wasn’t their fault — they were just demoted. Fortunately, they took the demotions with good grace. And the actual book — the one you’ll read — is better for having gone on the detour.

3. As is fairly typical for how I write, a substantial chunk on the book was written in the last month, with the most substantial portion of that being written right near the end — the point at which all the story points are solved in my head and what’s left isn’t the writing, but just the typing. Unfortunately for me, when I get into the “must finish book” phase, I tend also to snack more or less constantly, with my excuse being that I am feeding my brain. Well, my brain is fed, all right. Sadly, so is my gut. At the moment I weigh 178.4 pounds, which is roughly ten pounds heavier than I was when I started the month of November (you can probably see a bit of the extra poundage in the picture above). So tomorrow I start another diet. Also, for the next book: Learn not to do this again.

4. I noted on the site that for November crunch time I was going to try to avoid news as much as possible, because it was distracting and angried up the blood, and I kind of didn’t need that on deadline. I largely succeeded, with occasional slips, which were duly noted on Twitter. For my sins, someone suggested on a political site that I was using my deadline as an excuse not to comment on the healthcare.gov Web site debacle because liberals like me couldn’t stomach our hero Obama being criticized, or whatever.

Which made me want to say, hey, you can have a novel in 2014 or you can have me snark on Obama’s health care follies, but you can’t have both so pick one. But I didn’t (at least, not until right now). If you look at November blog posts, you’ll also note I didn’t write anything about all the stupid things the GOP/conservatives did in November either, because, you know, I was on a deadline. Also you can’t actually pick which you want, because one’s contractually obliged and the other isn’t.

(For the record: Obama’s November ACA follies: A definitive clusterfuck, for which he and his administration richly deserve the criticism they’ve received. Having your public face for your administration’s signature policy be a 404 for a couple of months is not the way to win friends.)

It was certainly the case that the lack of commentary here had an impact on visits; the visitorship for November was the lowest it was for two years, and as a result it’s entirely possible 2013’s visitor numbers will be lower than 2012’s. C’est la vie. As I’m pretty sure I’ve noted here, pay copy has to take precedence. Because I like living in my house and eating food. But maybe I can make up for it in December with full-frontal nudity: 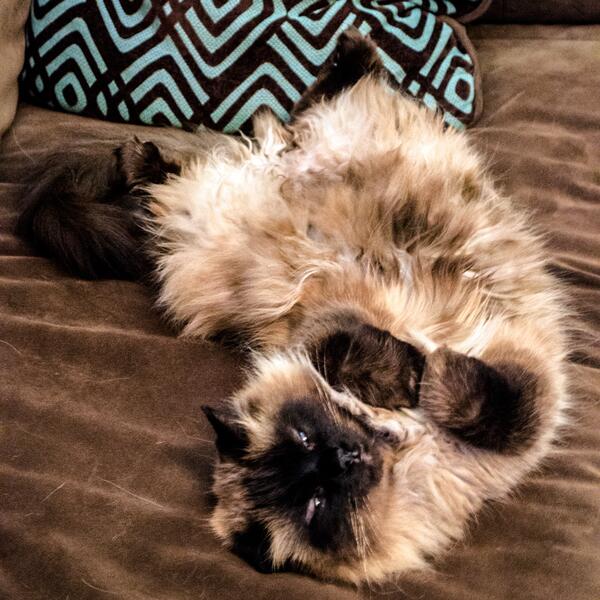 (Incidentally, if you make the sort of pun-related comment that naturally follows from such a picture if you are twelve, then I will Mallet your comment and tell Santa to put coal in your stocking this year. Just so you know.)

I’m a little behind on filling out the calendar for the second half of this month and January. I hope to get to it later today or tomorrow. So if you sent in a Big Idea query for Dec/Jan and have not heard back yet, don’t panic.

Welcome to the first day of the Whatever Shopping Guide 2013 — My way of helping you folks learn about cool creative gifts for the holidays, straight from the folks who have created them.

Today’s featured products are traditionally published books (including graphic novels and audiobooks); that is, books put out by publishers who ship books to stores on a returnable basis. In the comment thread below, authors and editors of these books will tell you a little bit about their latest and/or greatest books so that you will be enticed to get that book for yourself or loved ones this holiday season. Because, hey: Books are spectacular gifts, if I do say so myself. Enjoy your browsing, and I hope you find the perfect book!

Please note that the comment thread today is only for authors and editors to post about their books; please do not leave other comments, as they will be snipped out to keep the thread from getting cluttered. Thanks!

1. Authors and editors only, books only (including audiobooks). There will be another thread for other stuff, later in the week. Any type of book is fine: Fiction, non-fiction, graphic novels, etc. If you are not the author/editor of the book you’re posting about, don’t post. This is for authors and editors only.

2. For printed books, they must be currently in print (i.e., published before 12/31/13) and available on a returnable basis at bookstores and at the following three online bookstores: Amazon, Barnes & Noble, Powell’s. This is so people can find your book when they go looking for it. For audiobooks, they must be professionally published (no self-produced, self-published audiobooks) and at least available through Amazon/Audible. If your book isn’t available as described, wait for the shopping guide for non-traditional books, which will go up tomorrow.

3. One post per author. In that post, you can list whatever books of yours you like (as long as it meets the criteria in point 2), but allow me to suggest you focus on your most recent book. Note also that the majority of Whatever’s readership is in the US/Canada, so I suggest focusing on books currently available in North America.

Got it? Excellent. Then tell the folks about your book! And tell your author friends about this thread so they can come around as well.