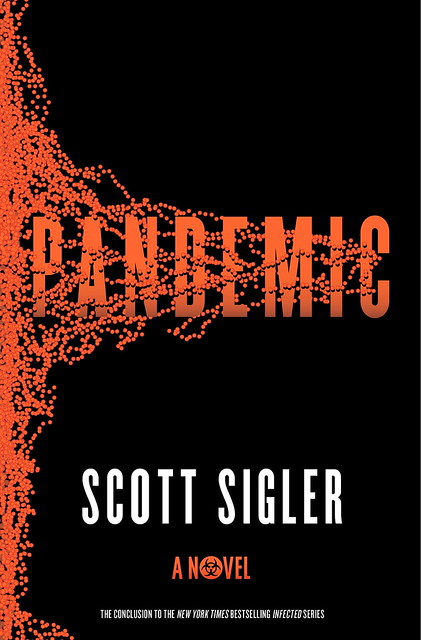 With a title like Pandemic, you know that things are not going to look good for humanity in this book. But author Scott Sigler isn’t wreaking havoc on the world without a plan — oh, no. He’s got a plan, friends. One that he’s been working on for years.

When I was a little kid, my dad took me to see the ’76 version of King Kong. Ever since that afternoon (once I stopped screaming in fear, of course — I was seven; giant gorillas were terrifying), I’ve been hopelessly addicted to horror movies.

According to the movies I love so much, there are a seemingly infinite number of species that want to kill or enslave humans. As in, all of us. Exterminate, exterminate, indeed. This species-wide genocide comes in several flavors, including the invasion, the plague and the horde. Often movies act like Ben & Jerry on bad acid, combining flavors in various, lethal combinations. An invasion/plague? Andromeda Strain. A plague/horde? The Walking Dead. There’s no end to the fun this Easy Bake Oven provides.

When any of these flavors are present, the demise of peoples tends to come in three stages: the Patient Zero Phase, the National Response Phase, and the Global “Oh, Shit” Phase (a.k.a. “the apocalypse”). Yes, I just made these phases up, but clearly they are 100% accurate and scientifically sound. No peer review necessary.

In any given book or movie, we often get to see one of these phases, sometimes two, but rarely all three. Invasion of the Body Snatchers is a Patient Zero film, meaning you see the attack from the earliest stages and go through the process of discovery along with the characters — we don’t really see a national response or know if one happens. In a movie like Outbreak, we see that defining factor of the National Response Phase: a Room Full of Important People watching red circles expand across a map of America, showing the spread of the disease. And there are several examples of the Global “Oh, Shit” Phase, where everything goes to hell in a hand basket, a la Night of the Comet, Lifeforce and many more.

My Big Idea? Write a trilogy that shows all three phases, so you are there at the very beginning, you witness the inevitable spread, and you bleed along with the characters for the final swan song.

I began this quest in 2008 with my novel Infected, which had its very own Big Idea. When a movie’s showing us the Patient Zero Phase, we often see a body count of the faceless masses lost in the “first wave.” Infected does something different: it tells the story of just one of those victims, Perry Dawsey, letting you experience his horror and confusion as an intelligent pathogen colonizes his body and his mind. He doesn’t know what’s happening because no one knows: the world has never seen anything like this. And those books and movies where the small team of victims barely stops the disease from escaping? Infected isn’t one of those — by the time Perry’s story closes, the vector has gone wild.

In the second book, Contagious, the camera rolls back and we see how this pathogen impacts all of America. We see the President try to process an impossible situation, the CDC working to contain the vector, and — yes — we see the Room Full of Important People watching red circles spread across a map of the US. Contagious ends with a bang, and all involved think the disease is gone for good. But as happens in a cataclysmic trilogy, not so much.

For the final novel, Pandemic, we’re in full-on Oh Shit Phase. We watch the human race fighting a losing battle for survival. This disease doesn’t just kill, it turns people into killers, creating a slowly shifting balance that steadily teeters towards the point of no return. Characters from both books return and strive to contain a disease that constantly changes, that thinks, that strategizes, always looking for the way to wipe humanity out forever.

Infected was the first novel I wrote. I finished the first draft some twenty years ago. The concept was simple: I would teach myself how to finish a novel by writing a very straightforward story — one man, alone in his apartment, facing the nightmare of his body turning against him. That first draft was very small town, very much indebted to early Stephen King. It only had a handful of characters and was filled with contrivances that kept away the outside involvement of real-world things like cops and doctors.

That small-town feel is where I’m most at home as a writer. Probably because I grew up in a small town, and that limited cast of characters in an isolated setting feels natural. The endless re-writes of Infected, however, forced the story out of Perry’s apartment and into a Tom Clancy arena where I had no experience and a comfort level of zero. I had to start thinking about how the police, the CDC, the FBI, and the government at large would respond. What I’d intended to be a very simple, laser-focused Patient Zero story set entirely in one poor bastard’s apartment — almost a ‘bottle episode’ of a novel — eventually forced me not only to expand my real-world knowledge, but to learn how to incorporate those real-world structures into a compelling narrative. It was challenging, but it was only the beginning.

When Contagious required the move to the National Phase, I faced new questions. Who actually responds to a new plague that turns people into psychotic murderers? How does something like that go up the chain of command? What governmental agencies have jurisdiction, and how do they react? When the shit truly hits the fan and an administration is looking at catastrophic loss of American life, what laws will our leaders break to stop an outbreak before it expands beyond any hope of control?

Pandemic compounded those complications even further. I had to factor in international relations, global transportation’s effects on vector spread, foreign deployment of US forces (along with when they would strike, with what and how hard), and the most disturbing thing of all: the real effects of a nuclear detonation on a modern city.

Now that the series is done, I don’t think I’ll swim in the global pool again. For future projects, all those pages that had to be used explaining real-world laws and organizations can — at least in part — be used for character and relationship. Hopefully, the small town boy can go back to the small town.

If, that is, there are any towns left after Pandemic.