First, an observation from earlier today, which is as true now as when I first said it, uh, like, four hours ago:

“The problem with being a writer is that one’s Asshole Phase is unusually well documented.” — me, to another writer

Second, I’m seeing various people commenting on these poll results from Digital Book World, in which it is pronounced that most writers — no matter how they publish — earn less than $1,000 a year from it (here’s a longer article in the Guardian about it).

My thoughts about it: Well, the poll doesn’t seem particularly rigorous, as it appears the participants were self-selecting; there’s some bit of selection bias going on there. So take the numbers with the appropriate grains of salt. That said, even if we discuss only the universe of respondents to the survey, the results aren’t telling us anything we don’t already know, both factually and anecdotally, which is that most writers aren’t making a whole lot from their writing, and that having a diversified set of income streams is the way to go (also, day jobs and awesome spouses/partners are nice to have when you can get them).

This isn’t necessarily an excuse for despair or resignation (i.e., the “no one becomes a writer to get rich” gambit, which I dislike). But it is useful in remembering that writing is work and that while finishing a work — and then publishing it! — is the end of one process, it’s additionally the start of another process entirely, one that takes as long (or longer) than being published, and which has its own set of victories and frustrations.

Third, along the line of that last sentence, see this piece by Kameron Hurley about the long, long path of being a writer, and what “success” looks like from the inside and outside.

Fourth, as a piece of personal archaeology, here’s the page for Scalzi Consulting in 2002. What? You’ve never heard of “Scalzi Consulting”? It was the name of my company when I was doing a lot of corporate and marketing work, before the whole “writing novels” thing took off — which, incidentally, it only really has in the last few years. Before then, consulting with tech and financial services companies was how I paid most of the bills as a freelancer, and should the novel writing thing ever collapse out from under me (and it might, you never know), it’s probably where I’ll go back to. Hey, bills won’t pay themselves. Mind you, for now I plan to ride this novel-writing train as far as it will go. I think it’s got a few miles left on it. We’ll see. 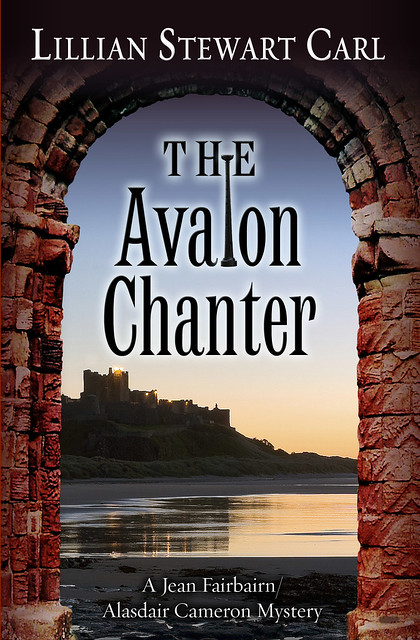 In today’s Big Idea, author Lillian Stewart Carl has a bone to pick with Sherlock Holmes — a bone that informs The Avalon Chanter, the latest novel in her paranormal mystery series. Take that, Sherlock!

In “The Adventure of the Sussex Vampire,” Sherlock Holmes proclaims, “This Agency stands flat-footed upon the ground and there it must remain. The world is big enough for us. No ghost need apply.”

My imagination being what it is, I envision ghosts lined up at a paranormal job fair, muttering about discrimination, perhaps even filing suits against Holmes’s agency with the Equal Employment Commission.

Really? Ask people who’ve seen one. Or who think they’ve seen one. As my character Jean Fairbairn would say—and does, multiple times—seeing might be believing, but believing is seeing.

No, my Big Idea is not the nature of reality (I’m not that ambitious) but our perception of reality—especially historical reality, where fact slips as easily into legend and myth as ghost stories slips into tourist brochures. It doesn’t matter whether ghosts (or the Loch Ness monster, or the deeds of a historical character) are factual or not, if people believe they are. Because beliefs make people act.

Jean Fairbairn and Alasdair Cameron are the protagonists of seven mystery novels. She’s a former history professor now writing for a Scottish history-and-travel magazine who inadvertently becomes an amateur sleuth. He begins the series as a professional sleuth, a Scottish police detective.

In the first book, The Secret Portrait, Jean sees a ghost and realizes Alasdair, of all people, can see it, too.

Jean looked around, not knowing whether to hug him or hit him. “No snappy comebacks? No skepticism? Or have you known all this time you’re allergic to ghosts, too?”

“Well then,” he said, with a crimp of his mouth that was almost a rueful smile, “I suppose I was wrong about all the ghosts being tired. Not for those with eyes to see and hearts to know.”

No surprise that Jean’s stock-in-trade is history and legends, the facts behind them and the way they can be distorted by true believers. Or, as she says, “Where the legend hits the road and blows a tire.” Having a skeptical significant other dovetails neatly with her work, even as it leads to heated discussions and more than a little eye-rolling.

Okay—I hear you backing away slowly and muttering about high school history class, where a football coach between practices droned the textbook out loud. Boring! Irrelevant! Eyeroll.

So how can I hit the road with my Big Idea and not blow a tire on potholes filled with boring?

Every day we citizens of the twenty-first century apply these clues from the past, be they fact or be they fantasy, to solve the mystery of just how the heck we ended up here and not down some other rabbit hole of memory and desire.

The muse of history is named Clio. I don’t know whether she’s a proper Athenian miss or a wild-eyed maenad—I only deal with her indirectly. My personal muse is a punk bagpiper wearing an earring, a kilt, and combat boots. When he’s good, he’s very good. And when he’s uncooperative to the point of hostile, I lure him out by offering him the history of Great Britain in general and Scotland in particular.

It’s great sweeping drama and odd little incidents. It’s bravado and lament. It’s my own ancestry, a paradoxical and pixilated blend of Celt, Norseman, and Anglo-Saxon. My maiden name, Stewart, is a rich source of historical material.

For example, I may well be descended from Robert the Bruce, whose grandson was the first Stewart king of Scotland. Do I fume at the Bruce’s depiction in Braveheart? Does my keyboard have an indentation from my forehead?

But then Braveheart, having about five seconds of historical verisimilitude, is an example of the smackdown between fact and fallacy that Jean and I love to write about. Relatively benign conflicts, not the full-bore international disaster of, say, the Nazis’ Aryan Myth.

Historical wishful thinkers make great characters. So do ghosts, who are manifestations of the past lingering into the present, of unresolved mysteries and uneasy memory. And who often depart this Earth thanks to murder.

If that coach had been sharing juicy details about a murder, you’d have stayed awake during class, right?

The victims in my mysteries die because of legends not only about the lost gold of Bonnie Prince Charlie, but about Charles Edward Stewart himself, goat or hero, depending. They die because of the possibility of the Loch Ness monster and the certainty of black magician Aleister Crowley, whose home above Loch Ness still creeps out the local people.

My victims die because of the mytho-babble behind The Da Vinci Code and others of its dent-in-the-keyboard ilk. They die because of legends of witchcraft in the American colonies, because of a decaying estate on the Isle of Skye named for the wee folk, the fairies, and because Edinburgh’s claustrophobic catacombs make good business.

In The Avalon Chanter, I take my odd couple from their usual haunts in Scotland to small Farnaby island just across the border in England. Here my historical maguffins are King Arthur and Queen Guinevere. Is Farnaby the Isle of Avalon? Archaeologist Maggie Lauder has personal reasons for trying to prove it is. But (of course) neither the body she finds in a medieval tomb nor the history of her own family are what she believes them to be.

Because history, both in the national and in the personal sense, doesn’t trace a direct line from past to present. It’s interlaced like the patterns decorating the Lindisfarne Gospels, as generations of men and women weave desire with destiny.

And if the thing going bump in the night is doing so only in your imagination, that doesn’t make it any less real—never mind Sherlock Holmes and his flat feet.