For Auction: EXTREMELY RARE Bound, Signed Outtakes from LOCK IN, Plus Signed 1st Edition of LOCK IN, for the Worldbuilders Charity 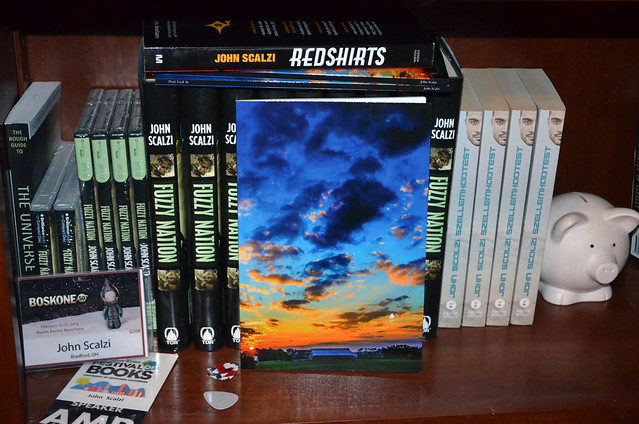 The wordy headline says it all! But in case it doesn’t, this bit from the auction page:

“(NOT) LOCK IN: The seven chapters John Scalzi didn’t use in his latest novel’s final version.

“You will be bidding on a particularly rare piece of ephemera: Seven chapters originally written for the novel Lock In, by John Scalzi, but ultimately not used for the book. These seven chapters feature two lead characters who were ultimately turned into featured characters in the final novel, to make way for a new protagonist. As a result these chapters were put aside and the beginning of the novel rewritten. The final novel keeps some but not all of the events, characters and situations and is ultimately substantially different from what you’ll find here.

“These seven chapters have been printed in an extremely limited perfect bound, paperback edition (four copies only) with only one copy intended for public release: The one here for auction. The cover features a photograph taken by the author. Scalzi will sign and (if desired) personalize the copy to the winner of the auction (or whomever he or she chooses). In addition, Scalzi will sign and personalize a first-edition hardcover copy of Lock In, so the auction bidder will be able to compare and contrast the two versions.”

Note the hardcover copy of Lock In will be provided when the book is published in August. But (Not) Lock In already exists, as you can see from the picture above.

Bidding is open between this very instant and 5pm Pacific, February 2. Here’s the link to the auction page. Good luck!

(P.S.: While you’re there, check out the other auctions Worldbuilders is running. There is some cool stuff there.)

(P.P.S.: For those of you who don’t know what Worldbuilders is, here are the details.)

9 Comments on “For Auction: EXTREMELY RARE Bound, Signed Outtakes from LOCK IN, Plus Signed 1st Edition of LOCK IN, for the Worldbuilders Charity”