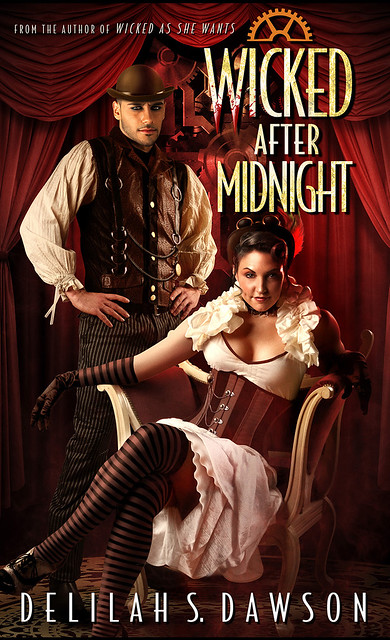 Life is a circus — but is the circus all it’s cracked up to be? Delilah S. Dawson ponders this very question, on several different levels, in her latest novel Wicked After Midnight. We now place her in the center ring to address the topic. Here’s your popcorn, and there’s her spotlight…

Here is a painful truth: the circus is a magical place only so long as you’re allowed to leave when the show is over.

That’s the first sentence of Wicked After Midnight, and that’s also the Big Idea behind the book. And at the heart of that sentiment is the same thing that’s at the heart of every creature alive, including me: murderous clowns.

And, more importantly, gaining the courage to break past it.

The steampunk fantasy world in which my Blud series takes place was built to be the perfect backdrop for magic, adventure, and sexy romance, and yet the books have deeper, darker themes that explore my own fears and past wounds. One heroine is escaping from rape and parental abandonment, another is nursing her dying grandmother and has just left an abusive relationship to find herself. Demi, the heroine of Wicked After Midnight, was a depressed art history major in our world who went into a coma from alcohol poisoning, woke up in a parallel universe, and was nearly killed by a warren of vampire rabbits.

Um, none of that is in any way autobiographical. At least not the bunnies.

Demi would have died twice had a certain blood-drinking ringmaster not found her and turned her into a Bludman like himself. After six years as a contortionist in a traveling carnival, Demi is an immature vampire caught in arrested development, an older version of Claudia from Interview with the Vampire. Her life seems carefree and exciting. But from her viewpoint behind the velvet curtain, it’s a cage.

Our heroine’s biggest fear is that she’ll be forever the same, so it’s no surprise when Demi escapes the carnival life to seek her destiny. But when her best friend is stolen by slavers during their journey, she has a new fear: losing what she holds dear.

If you’re a parent, perhaps you know this shift, too. When I was young, I thought I would live forever, and I was terrified of living a boring life. Now that I have children, I often feel that I’ve traded possibilities and excitement for safety and security. Losing one of my kids is now my greatest fear. And like Demi, I would fight any fight to save them.

So on one level, Wicked After Midnight is about facing fears and breaking past them. Fear of stasis, fear of moving forward, fear of loving, fear of being caged again, fear of losing what you love most, fearing of opening up to the vulnerability of loving someone with all your heart. And considering it’s the last book in my Blud series, it’s my attempt at facing some of my own lesser fears. When I was writing it, I couldn’t help thinking that it might be my last chance to write stories in a world I’ve come to love. I wanted to make it the biggest, most exciting, most fun adventure to date. But what if people didn’t like it? What if it was too ridiculous? What if I never got another book deal?

So I did what Demi did: faced fear head-on and had as much fun as I possibly could.

This book has cameos from most of my other characters, including the lizard boy and the kilted version of Thor. It has bone-filled catacombs and clockwork foxes and vampire poodles and runaway elephants and breaking into the Louvre and sex acts on a trapeze. It has Easter eggs based on art history and quotes from pop culture and Your Mom jokes. The hero is a person of color, and there’s a loving family with two moms who are cabaret girls. It’s the longest book I’ve ever written, and it’s a testament to feminism, to smashing down the walls of prejudice, to being exactly who you are, and to breaking out of the mold set for you by society.

In short, even if this book doesn’t do well, it’s going to feel like a triumph because I told fear to go screw itself and wrote the wildest adventure I could. Since the first Blud book sold in 2011, I’ve sought experiences to broaden my writing: I’ve flown on the flying trapeze, learned the twirls of Spanish web, and done vaulting on horseback. This series was my circus, and as safe as it felt to play my part behind the curtains, I’ve made peace with pulling down the big top and moving on to the next great adventure. This show is officially over, and as much as I used to fear it, now I’m excited about the future.

In my last e-novella, “The Damsel and the Daggerman,” intrepid journalist Jacinda Harville finds Demi moping around the caravan and tells her, “I very much advise determining the boundaries of your comfort zone and getting the hell out of it.”

This book is what happens when Demi follows her advice.

And every book I write is what happens when I follow it.

← How Cold It Is
Little Snow Rollers →