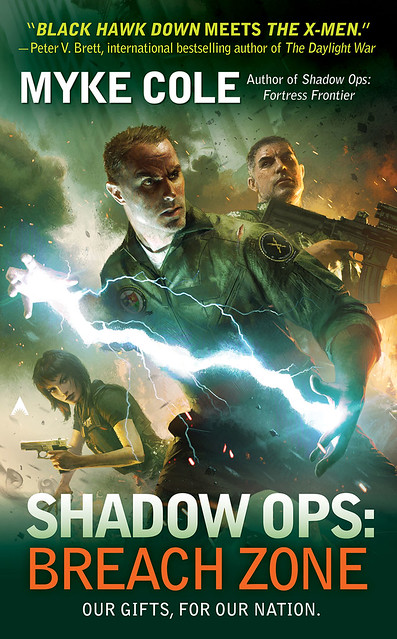 It can be a strange thing when the real world intersects with your fiction, particularly when you’re writing a work of fantasy. Myke Cole knows what that’s like, since it happened with his latest, Shadow Ops: Breach Zone. A strange thing — but is it a good thing? Well…

Let’s say you make a mistake. This one’s a whopper. You didn’t just zig when zagging was called for. You left the road, headed out into the bush, dug up about a few good size boulders and made damn sure they covered the way so the person behind you could enjoy them. This one was bad. This one will take you a while to live down.

What do you do?

Most of us are good folks. We might cling to pride for a spell, dig in our heels and argue against a preponderance of the evidence. But us regular folk, we come around in the end. We wring our hands, hang our heads and admit fault. We say we’re sorry. We’ll do better next time.

But what about when you’re not average folk? What happens when your mistakes impact not just yourself or even a few people, but an entire country, a country that you’ve been entrusted to lead? What happens when your errors, should you admit them, could destroy not only your life and your freedom, but your legacy? What do you do when billions of dollars and thousands of lives hinge on the myth that you haven’t done anything wrong?

Do you toe the line and take your licks? Do you stick your fingers in your ears and chant until the angry shouting of the protesters stops? And to prove you’ve done nothing wrong, do you keep moving in the same rut you’ve dug?

Do you double down on error?

What do you do when the chickens of a failed policy come home to roost?

The Shadow Ops series chronicles a United States desperately attempting to come to grips with the sudden return of magic into the world. That magic is wild and powerful. That magic is a weapon as deadly as a nuclear warhead. That magic threatens the government’s monopoly on force. The government’s reaction makes sense. Magic is dangerous. Magic must be addressed. The McGauer-Linden Act is the framework our leaders come up with. It is the best they know how to do.

Control Point examined one life caught in the cracks between that policy and the gray shades of reality. Fortress Frontier watches as the tension builds, the dissonance between law and a people who prize freedom above all else, who realize what they have sacrificed to feel safe.

Law is binary. Policy doesn’t work well with vagaries. It knows 0 or 1. Obeyed or broken. And it has to. The whim of the individual cannot govern the lives of millions. We have to have some sense of what to expect.

But people aren’t binary. Life isn’t interested in “zero tolerance.” Sometimes we do things just because. Sometimes the thing we want most is the thing we’ve been told we can’t have.

Sometimes, smart people have a tough time with policy. They want an explanation. “Thou shalt not” doesn’t cut it. They want to know why. They want a chance to argue the case. The Democratic process is slow. It’s easily subverted. There are people with more money and more connections who seem to have an easier time making the wheels turn.

Those smart people see that. It burns them. Sometimes, they’re smart enough to know that flying in the face of that has a price higher than they’re willing to pay.

Sometimes, they’re smart enough to not give a fuck.

I have always avoided political sentiment in my writing. I never set out to write a topical piece. But as Breach Zone came together, the Manning sentence was handed down. The Snowden case broke, our SIGINT program was laid bare, and the people reacted. I watched the government respond. Then I looked down at my manuscript, and I shuddered.

Life imitates art, they say. But the truth is that art takes tiny, subconscious cues from the world the artist lives in. Breach Zone was born in the ferment of a society at war with itself, in a country that is more divided than I, than my father, have ever seen.

I didn’t set out to write a topical piece. But in this final volume of the Shadow Ops series, I might have anyway.