Because it’s been a while. 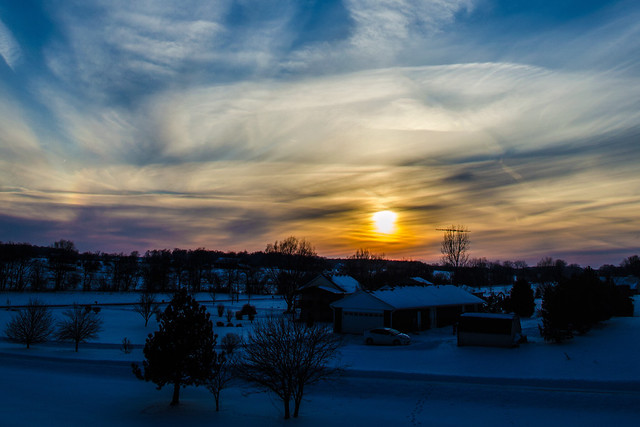 If you look to the left edge of the picture, you can see a faint sun dog. There was one to the right, too,out of frame, but it was even fainter. One day I’d like to get both sides, and maybe one on top. It would be something to live for. In the meantime, however, still a very nice exit by my favorite star.

1. In the United States (at least), “Freedom of Speech” is a legal term of art, and means a specific thing. Please be aware of what it means. If you use the term incorrectly, you may be corrected, or thought ignorant and not qualified to argue the point. You probably won’t like that.

2. Replace “Freedom of Speech” with “Censorship” in point one. Proceed forward.

3. If you conflate editorial standards and procedure with issues of freedom of speech and censorship, particularly when you are able to, say, post whatever you like on a web site you control, you may not be taken seriously. You may not like that either.

4. If you conflate the ability to say what you want, how you want, with an immunity from criticism or consequence of the speech, you are likely to be surprised. If you are not aware of, or refuse to seriously consider, that many people who might in times past have not publicly objected to your speech now feel free to do so and in no uncertain terms, you may become unhappy. If you choose not to treat those responses and criticisms seriously, your reputation may ultimately suffer. Your reputation today is highly contingent on what you do now, not what you’ve done in the past.

5. If a petition is created that you are asked to sign on to, it makes sense to do due diligence to make sure the particular issue that the petition is designed to address is, in fact, an actual issue. If it is not, you may eventually regret signing on to the petition.

6. Likewise, if you sign a petition because you believe the petition addresses a high-level issue of concern to you, but the text of the petition itself (including various publicly-accessible drafts) is poorly-written, offensive, and contains several basic errors of fact and logic, you should not be surprised when your name and reputation are attached to the worst parts of the petition, rather than the high-level issue you intended to address.

8. “Political Correctness” is a catchphrase which today means one of two things. The first is, “I have done no substantial thinking on this topic in at least twenty years and therefore anything I say past this point cannot be treated with any seriousness.” The second is “It is more important for me to continue my ingrained bigotry than it is for you not to be denigrated or offended by my bigotry, because I am lazy and do not wish to be bothered.” If in fact you do not intend to convey either of these two things, you should not use, nor sign on to a document which uses, the phrase “political correctness.”

9. If in your rhetoric you deploy the existence of a friend with certain political/social/racial characteristics to shield you from criticism of your rhetoric, you should be aware that a) it doesn’t work the way you intend, b) it makes your rhetoric more offensive, not less, c) your need to deploy this erstwhile friend to deflect criticism, likely without their consent, implicitly signals the weakness of your rhetoric. Others, particularly those with similar political/social/racial characteristics as your shield, will advantage their own personal experience more than your accounting of the alleged experience of your alleged friend, likely to your detriment. Consonantly, if a document you’ve signed onto is written by someone who deploys a “friend” in this way, remember point 7.

10. The ability to express one’s self is ideally tempered with understanding that how one chooses to say a thing — and whether one chooses to say it at all — is often as important as the fact that one can say it. People of good will can and do have varied points of view; people of good will can and do argue and debate, sometimes strongly, about events and topics important to them. Choosing words wisely is not censorship or an impediment to free speech. What it can be is a way to make sure one’s intentions are understood clearly and cleanly. Choosing words poorly, on the other hand, can signal that one has no intention of treating those on the receiving end of those words with respect. One of these has a happier outcome for everyone than the other.