Just a couple for the day:

One: Today someone who had pirated editions of my work very nicely came to find out how to compensate for my work, noting that he wanted to pay me directly rather than publishers, who he felt didn’t add much value to the process. I told him I disagreed and why, and in the process offered him a point of view he’d not considered before, which he appreciated. The exchange, and further commenting from readers and authors, is available for your perusal over at Reddit’s SciFi subreddit.

The takeaway: I actually like my publishers, and they add value to my work and don’t rip me off in the process. Please don’t consider them evil (at least in their involvement with me), or try to cut them out of the pay loop. Thank you.

Two: Lots of people asking me what I think of Hugh Howey’s look at author earnings via Amazon. My thoughts about it essentially boil down to this: It’s highly anecdotal (which Hugh to his credit is up front about) and based on suppositions that are speculative at best. This is an issue for me; at the end of the day I like my book sales data like I like my UFOs: Verifiable.

So, it’s interesting and will no doubt feed some polemics for the folks who think there’s some deep ideological battle going on for the soul of publishing, but it seems to me it should be approached with the understanding that regardless of intent it’s a murky, inexact representation of what’s going on in the publishing world.

Which, to be clear, is not entirely on Hugh as the author of the report. He’s working with what he has and is, I think, making a good faith effort to make educated guesses when he doesn’t have useful data. But there is a lot of useful data he doesn’t have, because so much of the data one would need is incomplete and/or highly decentralized and/or not always in the author’s power to share –or, alternately, if the author is not happy with their sales, something they want to share. It should also be noted (as Cory Doctorow just has at Boing Boing) that Hugh’s data is limited only to Amazon. As much as it would like to be, Amazon is not the entire of the publishing retail world. I personally sell a ton of books on Amazon. But I also sell a ton of books off of Amazon, too.

What I would say is that more data sharing is good. It’s why I shared Redshirts hardcover data last year; it’s why Jim Hines talks about his writing income. In that respect, Hugh’s doing a mitzvah for writers; good on him. 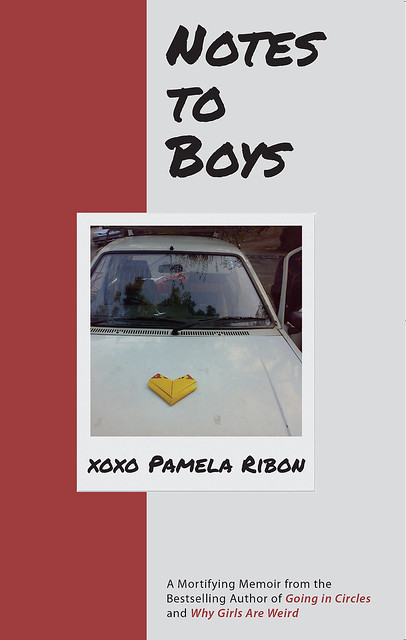 Every time Pamela Ribon does a Big Idea here, I inevitably note she is one of the funniest humans that I know. I note that because a) she is, b) I think at least some of her humor springs from a place I recognize — that is, being a yearny, awkward teen whose internal world of feeling things massively outstripped the ability to express those things in a manner comfortable to one’s self or others.

This is why, even though I am a boy who likes girls, Ribon’s memoir Notes to Boys (And Other Things I Shouldn’t Share in Public) is hilariously perfect. It’s a combination of the teenage Ribon’s letters to boys and the adult Ribon’s commentary on the letters, and reading it, I was cringing and laughing simultaneously, because I was there, man, or somewhere close enough to there that I could wave. I’m happy to say we both survived.

Here’s Ribon now with her notes to you on Notes to Boys.

High school sucks. It sucked then, it sucks now, it sucks in theory, and it sucks in memory. Those four years stretch time and become infinite. Every day is all the days ever. If you were anything like me, back then you found yourself sitting in Pre-Cal with a million factorial amount of insecurity.

Even worse: this was back when there wasn’t an Internet to reach out to. No world that would listen, no place for me to carve out my “voice.” There was no way to tweet the injustices I suffered in the lunchroom. I couldn’t Tumblr my way out of a broken heart.

All I had was a whole lot of loose-leaf three-hole punch paper, and a handful of crushes.  So, I started writing notes to boys.

Sure, sure. Lots of teenage girls write notes to boys. “Hey. How are you? I’m in English. Bored. Should we see a movie on Friday?”

Not mine. My notes stuck with you.  …Probably because they were sort of stalking you.

“How can I tell you how much you mean to me? Shall I harness the sun to show you how bright my love for you burns? I will do it! Just tell me to do it and I will obey.”

I know I was only thirteen, but I was just so ready to be a woman. I wanted a loving, mature relationship that would help me survive the four years of hell I had before me. I knew if I kept writing, I would one day find the boy – nay, the man! – who was ready and willing to handle all of me. My heart. My brain. My mixtapes. My notes about my mixtapes.

I wrote hundreds of notes to boys, and almost always delivered those notes to those boys – but not before making a copy. The boys got the second, more carefully handwritten draft.  But I saved every scribbly, emotion-soaked, hormonal first draft for myself.

And I still have them.

There’s the eight-page note I’d written to a boy in my homeroom class. He sometimes talked to me on the phone after school while we did our homework and watched television. I wrote asking for advice about a boy I liked – acting like he wasn’t the boy I was talking about – hoping he could help me tell a boy who doesn’t know I like him that I might actually love him. Yeah, I was smooth like that.

Eight pages of awkward love, and then I immediately called that boy and I read him the entire letter.

Things ended there. So, I spent another month writing notes to other boys I liked, wondering what I’d done wrong with this boy.

Basically, I was Carrie Bradshaw without a nightlife. Veronica Sawyer minus all of the cool.

There’s a giant folder stuffed with handwritten letters I’ve carried from city to city, apartment to house, for decades. I’ve shared some of these letters in the past at stage shows or readings, but this is the first time I’ve ever pieced them all together to try to understand why my teen self needed to share just so much of herself with boys who didn’t really want to handle that much me. I mean, they physically couldn’t: the pagecount alone was probably pretty taxing on their backpacks.

It’s scary to share them in such a permanent way as a book, that’s for sure. But every time I’ve read these letters in public—when I’ve stood in front of people and let them hear what it’s like to be in the middle of such raw, teenaged angst – a funny thing happens. Almost all of them shelter their faces as I talk, as if my words become air daggers, slicing the vulnerable spots. Other people make that gut-deep sound – that horrified moan that turns into a belly laugh – which I love so very much.

But the best part is that at some point someone will come up to me or write to me later to say, “I was just like that. I thought I was the only one. I wish teenage me could’ve been friends with teenage you. I think we would’ve helped each other through it.”

All these retroactive best friends and bodyguards, protective of my younger self. It is both beautiful and humbling. I might have felt alone, but I wasn’t. You were all there, each in your own bedrooms, wondering how you’d ever get out alive.

That’s the big idea behind Notes to Boys (And Other Things I Shouldn’t Share in Public). I’ll tell you the most mortifying things I’ve done in the name of teenaged love, and in exchange, I’ll just blindly assume you did pretty much the same. (I mean, we all almost accidentally lost our virginities to a Skinhead, right? No? Just me? It was a small town in Texas, you guys. I didn’t know.)

I’ll remind you of that time when not having the right lunch period could pretty much destroy your social standing. Of those days when your heart could slam into your throat because The One You Love But Does Not Know You Live unexpectedly walked past you in the hall. I will remind you of that time you tried to be a vegan (because you love animals), listened to Metallica (because boys love Metallica), or started an underground newspaper (because you love Pump Up the Volume and Sassy and you are afraid of getting grounded if you put your name on something protesting the dress code).

This is a memoir for the misfits of grunge. For the ones who walked around looking like they’d just left the set of Reality Bites. But it’s also for anybody who is fifteen or was once fifteen or might have to be fifteen someday. It’s both a warning and a little therapy.  I’m sorry it’s so awkward at times. It’s because I didn’t understand how sex worked.