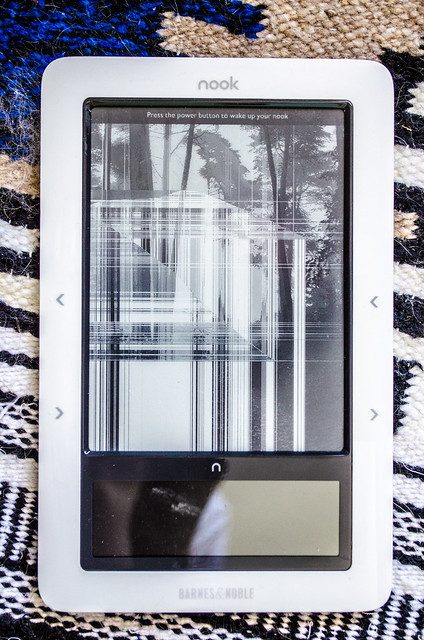 I was given a first generation Nook by a friend of mine in 2010, and yesterday, after a week at sea and in the sun, the thing gave up the ghost. I got roughly three and a half years of use out of it. On one hand, for a piece of handheld electronics, that’s not a bad run. On the other hand, it’s a reminder that the life of electronic equipment, relative to a decently-produced physical book, is tragically evanescent. The mass market paperback of The Human Division which is sitting on my desk at the moment has the potential to outlive me and be accessible to anyone who has the ability to pick it up (and read English); the electronic version of it I have via B&N* lasts only as long, effectively speaking, as I keep a B&N account — or B&N exists at all.**

Be that as it may, I really do like e-ink readers; they’re easy on the eyes and on power supplies. So I went ahead an bought the latest generation of Nook e-ink reader (this one, specifically). Given the state of B&N’s Nook business, it might be the last e-reader of that brand I’ll have a chance to buy. But if it lasts at least as long as its predecessor I won’t have too much reason to complain. At this point, I think it’s clear that you buy these things with the understanding they don’t last forever.

* Yes, I buy finished electronic copies of my books. I can afford it.

** I am aware of course that I can strip off the DRM of any book I buy and just port it to another reader. But that takes work. I’m likely to avoid doing that work for as long as I possibly can.