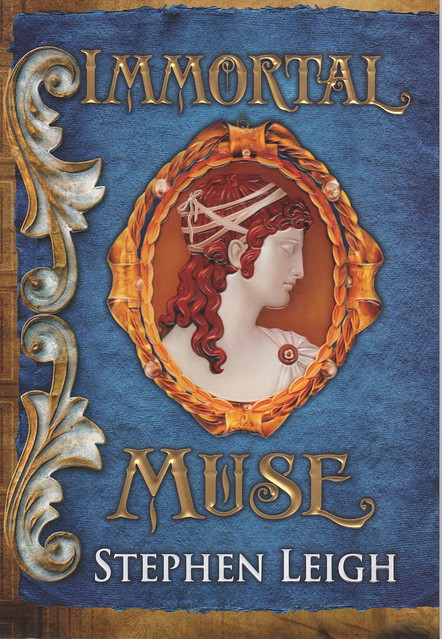 When writers start a book, there’s the idea, person or event that the book centers on. But when the writing starts in earnest, does that initial idea stay at the center? Does it have to? Stephen Leigh confronted these very questions while writing his latest novel, Immortal Muse. Here he is to talk about how it worked out for him… this time.

The first spark that resulted in Immortal Muse came in January, 2010. I habitually kick up the BBC’s “Day In Pictures” website in the morning — I love photography, and they always have incredible images. That day, I saw a shot of a woman reflected in curved metal elongating her figure, and that reminded me of my Fine Art undergrad days and dark mornings staring at slides in Art History class, and specifically the work of Amedeo Modigliani. So I googled Modigliani and glanced at several of his portraits. I happened to notice that many of his portraits were of the same person:  Jeanne Hébuterne.

So I googled her…

Ever felt a sudden, strong attraction to a person in a photo? That happened to me with Jeanne. I thought, gee, if I were much younger, unattached, and able to travel back in time, I’d love to hit Paris in 1918 and look her up. That being three successive impossibilities, there was zero chance of this happening, so it was a safe thought.  (You can see a photograph of Jeanne here).

I also read the biography and discovered a tragic and sad love story. Here’s the short, truncated version. Jeanne was Modigliani’s last muse. She met him in 1917; they fell in love. During their affair, Jeanne became pregnant, giving birth to a daughter in 1918.  Jeanne would become pregnant again, but by that time Modigliani was suffering from tubercular meningitis; he would die in January of 1920. Jeanne, eight months pregnant and exhausted from caring for him, was distraught. Her parents had taken her to their home, but the day after Modigliani’s death, Jeanne threw herself from the fifth floor balcony of her parents’ apartment, ending her life and that of her unborn child. She was twenty years old.

The whole story resonated. With novels (at least for me), Big Ideas come from several sources, not one. If you want the whole gory story of the genesis for the novel, it’s here. Suffice it say that I started thinking about a muse who would touch several historical figures… because then I could do something with Jeanne and Amedeo.

I proceeded to draft out the novel… where my muse protagonist shows up everywhere from the late 1300s to contemporary NYC. But I’ll admit that something was already bothering me even as I sent out the initial polished draft to my editor at DAW, Sheila Gilbert. I was hoping that Sheila wouldn’t sense that struggle, and tell me “Oh, this is wonderful and perfect and for you to change a single golden word would be a crime.”

Yeah. Right. I should have known better.

Sheila called after she’d read the draft, telling me how much she liked the overall book, but also (of course) mentioning a few things she felt I needed to work on. Chief among those was the Modigliani section. I’ll paraphrase what Sheila said:  “You have her pregnant twice here, and I know that’s because, historically, she was, but here’s the problem: if your muse can have children, than she should have had kids all throughout history; if she’s had those kids, then if she isn’t concerned with their welfare and their descendant’s welfare and so on, then she becomes a cold, selfish, and unsympathetic character. You don’t want that.”

My answer to Sheila was, well, I sorta gave a hand-wave explanation by saying that this happened because Jeanne was so deeply in love with Amedeo that something inside her shifted and she could become pregnant even though that had never happened before over the centuries, and gosh golly gee doesn’t that work?

There was silence on the other end of the line. Sheila uses silence well.  “OK,” I told her finally. “I don’t buy that either. Let me think about all this, and I’ll get back to you in a few days.”

I thought about it. I thought about it obsessively. I really loved the alternate history that I’d come up for Jeanne, and after all, she’d been the initial spark for the whole damn book.  I considered not giving Jeanne and Amedeo children at all, but for me the kick of writing historical fantasy is in actually using the facts and finding alternate explanations for them. Making Jeanne childless would be bending genuine history far too much for my comfort.

How else could I save this section? How could I make it work? After all, this was over 10,000 words of the novel. It had taken me months to write. I had to save it, right?

And I realized this: I couldn’t. The more I thought about it, the more I knew that the only good writerly choice was to jettison Jeanne entirely — which would involve re-envisioning the structure and much of the plot of the book. Here’s the truth: sometimes the Big Idea doesn’t make it into the book because it doesn’t work with what the book eventually becomes. That precious idea-child of yours has to be cast out and exiled, despite the pain.

Reluctantly, I deleted the section and began the process of re-writing from the beginning.

Well, I deleted the section from the book, but I kept the file. I’d worked on it too much to just toss it in the digital bin. If you’d like to see it, I’ll give you the link in a moment.  Mind you, the section isn’t sufficiently proofed, it’s missing several additional polishing passes the rest of manuscript received, and it also contains spoilers that might affect your reading of the “real” book. Worse, the ‘spoilers’ in the section are wrong — they don’t match events in the final revision.  Bear all this in mind if you decide to take a look. DO NOT CLICK HERE IF YOU DON’T WANT SPOILERS BEFORE READING THE BOOK!

In the end, Big Ideas are wonderful things, and even though the one that started me on the path for this book didn’t make it between the covers, I’ll always be grateful to Jeanne for being my muse, if only for a time.