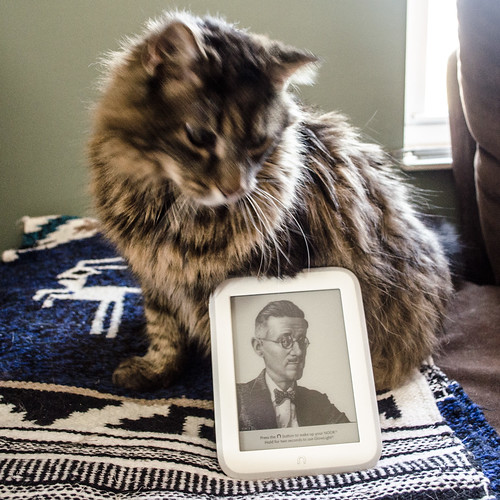 Yes, it is a tiny little thing, isn’t it. Although in point of fact it has the same screen real estate as my first-gen Nook; what it’s missing is the bottom third, which included the little LCD screen. It’s also (and not surprisingly) substantially thinner and lighter the first-gen Nook, which was not especially hefty to begin with. It’s something like six ounces, which means it probably weighs less than the paperback version of The Human Division. That’s a little weird.

I’ve had the thing for less than a day so I don’t want to post an in-depth review, but I will say that so far it’s been pretty lovely. It does what it’s supposed to (i.e., allow you to read electronic books without much eyestrain), the screen is crisp and clear, and the built-in light works as advertised. The thing doesn’t have as many features as the first-gen Nook; you can’t cruise the Web, for example. But inasmuch as cruising the Web on an e-ink reader was a distinctly subpar experience that I did exactly once, I cant say I will miss it much. For reading books, the new Nook is exactly as advertised.

44 thoughts on “The New Nook Glowlight, With Cat for Scale”