1. John Harris is the artist who does the cover for my Old Man’s War books (and the individual episodes of The Human Division), and he does such a great job of it that I co-dedicated the compiled edition The Human Division to him in appreciation. He has an upcoming art book coming out, for which I wrote an introduction. Tor.com has the details here, as well as samples of the fantastic art Harris has in the book. And I have to say, I love the cover.

(If you just want to go preorder the book — which I have seen in a preproduction version and which is just plain gorgeous — here’s the link.)

2. Writer Mikey Neumann and artist Kris Straub were on the latest JoCo cruise with me (and, to be clear, many many others) and decided that as long as they were there they would do an interview video series with some of the folks on the boat with them. And thus began “On a Bed with Kris and Mikey,” in which the two, as advertised, interview someone while all of them are on a bed. This week, that person is me.

Interview topics include my chest hair, how many languages I am translated in and who between me and Pat Rothfuss would win in a fight. It’s fairly amusing, although I will note that in watching it I have observed that the “propped up on a bed” position reveals my middle-agedness at its squishiest. I will henceforth refuse further interviews in that position, unless/until I get really ripped. 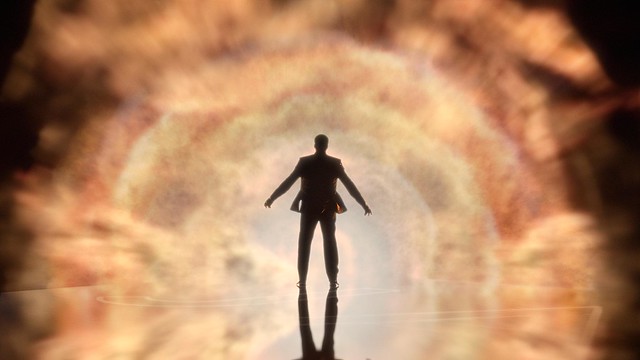 A couple of years ago it was announced that there would be a new Cosmos series, patterned after the 1980 series by Carl Sagan, this time featuring Neil deGrasse Tyson. I’m on record as being a huge fan of the original series — I would say that it’s one of the most influential TV series in my own personal history — and the new series was going to have Ann Druyan, Sagan’s wife, as a producer, so I was reasonably certain that the new version would stick to the basic concept of the original, gussied up with current effects and such. So I was looking forward it when it showed up.

The first episode aired last night on Fox (which is significant in itself — an unabashedly pro-science documentary show on commercial network TV? Even the original series could only manage PBS), and I have to say I was pretty content with what I saw. As someone who has written an astronomy book and is well steeped in science, I’m not the target audience for the show — there’s nothing that Neil deGrasse Tyson is going to say in the series that I’m not already very likely to know — but as I said last night, if I were ten years old, the age I was when the original series came out, my mind would be blown. The show is colorful and beautiful to look at, nicely-paced and edited and Tyson is a pleasant host. He’s not Sagan, but then why should he be? Being himself is sufficient.

But the main reason why the show works this time is the same reason why the show worked the first time — it’s unabashedly aimed at a popular audience. I’ve said before that one of the things I learned from the original series is that so much of science is understandable to the average person; I thumbnail it as “anyone can get 80% of any scientific topic.” That other 20% is what takes real attention — but if you can get most people 80% of the way there, just by speaking plain language and being engaging while you do so, the benefits can be enormous in the long run. This series is made to provide that 80%.

This Cosmos series, like the one before it, doesn’t shy away from firmly establishing scientific principles and theory as factual and necessary; it’s even confident enough to point out the things we don’t know because the suggestion is that by adhering to the simple scientific principles of questioning, testing and observing, we might eventually learn more about them. I think presenting these things as desirable in themselves and not in conflict with any other sort of thinking is pretty smart.

Quibbles? I have a few. The tour of the solar system in the first episode featured an overly populated asteroid belt; the music by Alan Silvestri is decent but so far not on the same level as the iconic music of the original series, provided by Vangelis; I thought the animated bit about Giordano Bruno went on a bit long. I also note that these are thing the nearly-45-year-old John Scalzi would notice; I don’t know that the 10-year-old me would notice them, or care if he did.

Overall, I’m happy with the new series so far, and positively delighted that Fox is giving it the sort of play that it is — launching it on nine other of its networks aside from its flagship commercial network is not insignificant. Will it have the same impact that the original series had? I don’t know, although it would be nice. But even if it doesn’t, I don’t have any doubt that there are kids out there who will take to it like I took to the original. And what a gift that would be, to set into motion a new generation of scientists, writers and thinkers, lighting candles against the darkness of a demon-haunted world.