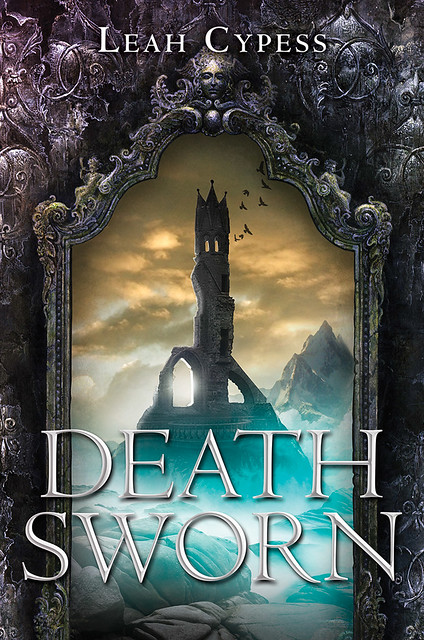 In this edition of The Big Idea, author Leah Cypess has a shocking confession about the genesis of her new novel Death Sworn! Which isn’t, uh, actually all that shocking for those of us who are writers, because I think most of us do something like it. I mean, I do. But even so! Remember to be shocked when she confesses! Now!

I have a mental list of snarky answers to the “Where do you get your ideas?” question, things that I’d never say but that I sometimes think rather forcefully. Topping the Never Say list is, “I steal them from more popular books.”

I can’t say it for two reasons. First, because people would take me seriously; and second, because there is a germ of truth in it. Reading is my primary source of inspiration, and many of my ideas come from the spaces between other writers’ ideas.

I grew up on a steady, undiluted brew of epic fantasy and golden-age science fiction, but it was clear to me that wasn’t what I was going to write. (Well, it was clear after a few misguided attempts that will never see the light of day.) The ideas that caught my imagination as a writer, rather than a reader, were never those of the main character and his world-saving quest. They were the untold stories of the minor characters, the potential complications hidden in the world-building, the what-ifs that weren’t pursued.

I remember clearly when the idea for Death Sworn came to me. I was in my parents’ home, nursing my seven-month-old daughter while re-reading my much-worn copy of the first book in The Elenium, a trilogy by David Eddings. The main character in the trilogy is a soldier in a religious military order, and one of the secondary characters is a pacifist sorceress sent to tutor the soldiers in the arts of magic.

In Eddings’ books, this works out wonderfully; aside from the occasional icy stare and caustic comment, the knights and the sorceress get along swimmingly. But obviously, this scenario might not work out so well, which is where my “what if” came in. What if the pacifist sorceress wasn’t the slightest bit thrilled about tutoring a group of people she regarded as killers? What if she was being forced to do it, and found them repulsive?

And – because you have to mix in your own ideas, or what’s the fun? — what if she wasn’t really a sorceress at all? What if she had lost her powers, and had to keep that secret from her new students, who were all assassins-in-training?

By the time the baby was fed, the first scene of the book had come alive in my mind: a young woman who had lost everything was approaching an underground assassins’ stronghold, prepared to die. I handed the baby over to her grandparents (for writers with kids, I highly recommend coming up with new ideas when there are grandparents around), and started writing.

Despite that strong start, it took the book a long time to take shape; the seven-month-old is now seven years old. This is partly because ideas are just ideas, and it can take time to flesh them out, think them through, and hammer them into a story. It’s partly because grandparents aren’t around all the time. And it’s partly because my research into the historical sect of Assassins, from whom we derive the word, pulled my story in an entirely new direction.

The typical assassin in a fantasy novel is a murderer-for-hire. If they are the protagonist, the story usually revolves around them, at some point, balking at killing someone. But the historical Assassins didn’t kill for money (or at least, not only for money). Their assassinations were driven by ideology and politics, and their goals were often not understood by their enemies or even their allies.

It was the history and legends of that sect that kept coming to mind as I created my own society of assassins, rather than the lone dagger-wielders with tragic childhoods and hearts of gold I was used to reading about. I soon found myself writing a story very different from the one I had first envisioned.

In Eddings-style epic fantasy there’s good, and there’s evil… and there are, despite frequent diatribes to the contrary, gray areas. But all three tend to be clearly defined, to the reader if not to the characters. In my story, everyone starts out knowing that there’s good and evil, and that they are on the right side of that divide. But while a young sorceress struggles both to stay alive and to redefine who she is without her magic, she will come up against a worldview diametrically opposed to the one she has always believed. And she will discover that confronting other peoples’ certainties can cast doubt upon your own.

Not that I’ve turned my back on my epic fantasy roots. The fate of the world will indeed come into play… in Book Two. (This is a duology.) But Death Sworn is a contained murder mystery that isn’t about the world – not yet. It’s about a claustrophobic underground stronghold where two visions of right and wrong will meet and clash; and where what will be changed is not the world, but one powerless girl’s view of it.