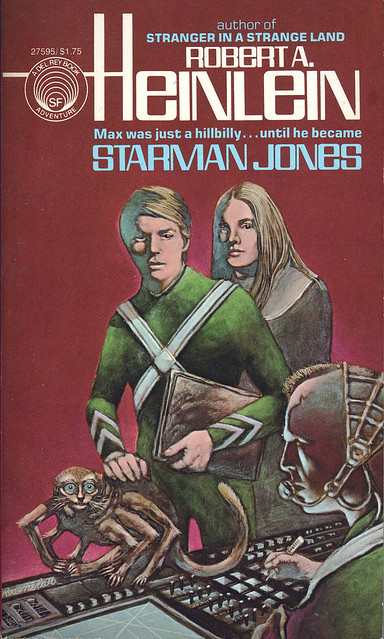 As it’s relevant to yesterday’s discussion:

About a year ago Athena was wondering what she should read next, and wandered into my office to look at books. Since she was amenable to suggestion, I went ahead and offered her Starman Jones, which is one of my favorite of the Heinlein juveniles. She looked at it a bit skeptically (it was an old copy with typically 80s cover art), but she was willing to give it a try.

And she did — she read a few chapters, and then she put it aside and read something else. I asked her later why she abandoned the book, and she more or less shrugged and said it was okay but it really didn’t speak to her.

Which on one hand made me sad — big Heinlein fan here, and also a fan of that particular book — but on the other hand didn’t surprise me all that much. Athena reads a ton of books and almost all the books she reads have been published in the last decade. The good news is that books in the last decade have been pretty excellent (the occasionally 50 Shades sort of thing notwithstanding — which Athena read, unbeknownst to me, and found less than impressive), so she hasn’t suffered for a lack of good work to read.

The sad news for me, though, is that it means a lot of the books I loved when I was a kid, she doesn’t have much time for. It’s not just Starman Jones, to be clear. Over the years it’s also been the Dark is Rising series, A Wrinkle in Time, The Phantom Tollbooth and a whole other host of books I loved but she… didn’t. In their place were books by John Green, Scott Westerfeld, Suzanne Collins, Margaret Peterson Haddix, Neil Gaiman, and so on. All good books and authors… just not my books and authors. Which is, of course, fine. My daughter also has different music than I do, and different favorite movies and television, and we frequent different places online. It shouldn’t be entirely surprising that her tastes in books also moves away from my own.

It’s also to the point that culture is not static and that every generation wants their own music, books and movies. In the case of Starman Jones, the book was a little old-fashioned when I first got hold of it around 1980, 27 years after it was originally published. I gave it to my daughter to read sixty years after its publication date. Regardless of its charms as a book, that’s a steep uphill climb for any book. It’s not that the book can’t be gotten into. It’s just that nearly everything about it is several steps out of sync with my daughter’s world.

Do I see Athena ever reading Heinlein? It’s certainly possible, if she takes a special interest in science fiction and decides to work her way back from current authors. But I don’t really see him ever being one of her authors in the way he is one of my authors. And while extending out from a single example is always fraught with danger, I have to say I wouldn’t be surprised if Heinlein is today only very rarely a teen’s author like he was my author. I suspect that door is closing, if it’s not already closed entirely.

Well. We still have Shel Silverstein in common. I can work with that.

227 thoughts on “An Anecdotal Observation, Relating to Robert Heinlein and the Youth of Today”