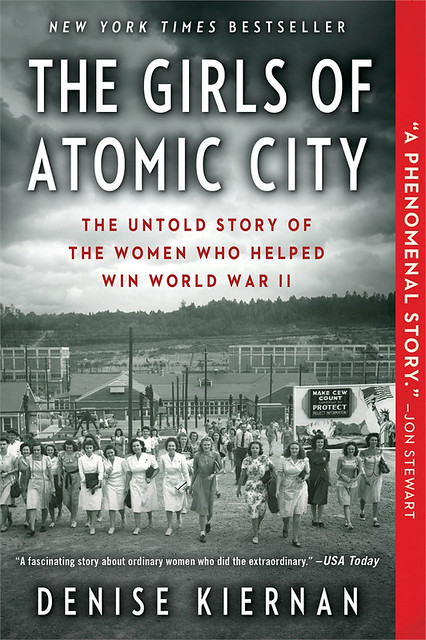 Fiction and non-fiction are different categories of storytelling — but in both cases the author has to decide what to tell and how to tell it, shaping the story so that it is a story, rather than just a leaden bundle of information. When researching the real-life information the would become The Girls of Atomic City, author Denise Kiernan found an interesting idea… now all she had to do was make a tale out of it. Here’s how she did it.

A story without conflict is like an inhibited lover. It just lies there. No matter how hard you try to get turned on, you lose interest. It can’t be over soon enough.

What attracts me as a writer to a particular story, what inspires that chemistry, is often—on the surface at least—unpredictable. Though there may not appear to be much rhyme or reason to my tastes, the one thing that always hooks me is that those tales keep me guessing. Their conversations grab me and I keep coming back to get to know them better, to keep turning their pages.

As a writer, sometimes it is just a look—photos, specifically. That’s what happened with my latest nonfiction book. I came across a vintage, black-and-white photo of some very young women operating some very odd-looking machines. The caption explained that many of these young women were recent high school graduates from rural Tennessee, and that they were enriching uranium for the first atomic bomb. The kicker: they had no idea that that was what they were doing.

Fantastic dramatic tension! I thought. You’re working on the most destructive weapon known to mankind and you have no idea until that very same weapon is revealed to the world? I dove in, and the story kept getting better. People were recruited from all over to live and work in a secret government city not found on any maps. They were highly trained to perform intricate tasks with no idea what larger purpose those tasks served. Better yet, if they asked too many questions, their stay living and working in this mysterious town was over in a hurry.

I was hooked by the Orwellian feel of it all. Looming billboards reminding everyone to keep their lips zipped. Undercover agents and citizen informants stealthily listening in on conversations in dorms and cafeterias. While I felt the story had all the hallmarks of an engaging novel, I figured that when truth seems stranger than fiction, why not stick with the truth?

This presented a couple of challenges. First, my subjects were in their eighties and nineties. If I  was going to write a work of narrative nonfiction, I wanted the women’s experiences to move the story forward. I wanted to stay with their voices and their perspectives. While I was routinely amazed at the level of detail many of them recalled regarding events that had transpired so long ago, there were certainly gaps in everyone’s memories. In order to tell what I considered to be a complete story about the town of Oak Ridge during World War II, I had to use multiple women. There was an incredible amount of time-lining and Post-It shuffling going on all over my living room floor (no computer screen was big enough in the early stages) in order to piece it all together.

Another central challenge revolved around the book’s big idea: Only they didn’t know… I wanted to embrace the “not-knowingness” of those characters, which was going to provide the most juice, dramatically speaking. So while the reader knows the story is headed to the dropping of the world’s first atomic bombs, I still needed a way to let the main characters drive that story, even if they were essentially driving blindfolded.

I considered various approaches. Omitting the entire behind-the-scenes maneuvering of the Manhattan Project officials and scientists kept my female leads in control, in a sense, but it risked leaving the reader too far behind. If he or she knew too little about the history of the Manhattan Project, the real stakes of that moment in history would be lost. Third-person omniscient seemed promising for a bit, but whenever I heard my inner voice beginning to say, Little did they know… I started to feel as though I was writing a cheesy movie trailer instead of a nonfiction book.

So I decided to take a hint from the Manhattan Project itself: I decided to compartmentalize. One of the ways the folks in the know kept a lid on the Manhattan Project was by keeping jobs, responsibilities and access to information as limited and as separate as possible. There were two worlds, really, one in which workers toiled away with little idea what they were working on and a much smaller, more exclusive world in which strings were pulled, strategies were devised and nuclear history was made.

I decided to create two worlds, too. I wrote interstitial chapters that took the readers out of the world of Oak Ridge and gave them a peek at what the was going on at the highest levels of the Manhattan Project. I deliberately kept my women, my characters, out of that world and those chapters. That separation reinforced one of the key strategic elements of the Manhattan Project, kept my characters in control of their piece of the puzzle, while helping the reader understand the larger stakes impacting my characters’ lives.

In the end, this freed up my characters to explore their own wartime dramas, ones I found were filled with the kinds of surprising twists and challenges that we all can relate to. They found loves and lost loved ones. They faced fears and forged unexpected friendships. They wondered what was going on around them, but put their heads down and got to work and I, in turn, got to work for them. They kept me hooked, and I was happy to let them take the lead.