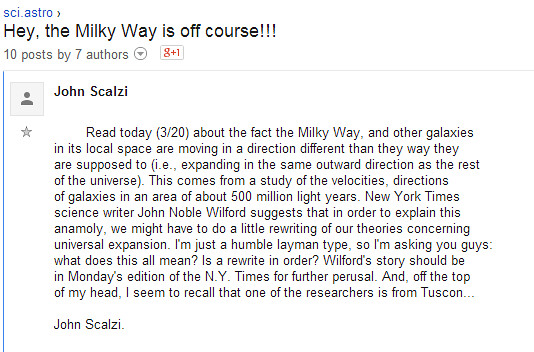 Above, you see the very first verifiable evidence of me being on the Internet: A USENET post, on the sci.astro newsgroup, dated March 20, 1994 — twenty years ago today. For trivia fans, it was posted from my apartment in Fresno, where I was working at the local newspaper as their film critic, and if memory serves, I posted it on a Mac Quadra (probably this model), whilst facing north (no, really). 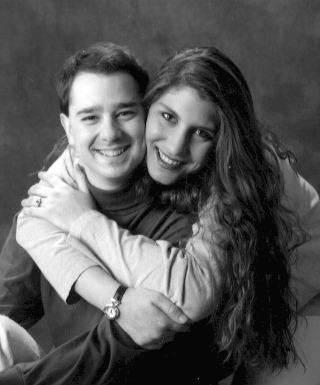 At least Krissy looks pretty much the same.

Of course, it wasn’t the first time I had been online. Prior to that I had been online via a local BBS in high school and the Prodigy online service, starting in 1992, but when I upgraded to the Quadra I also started looking around at that new-fangled “World Wide Web” thing I had heard so much about. Once I started looking about, in reasonably short time I had my own hand-rolled Web page via a local service provider (cris.com, now defunct) and begun reading an posting to USENET, most notably at alt.society.generation-x, which was a center of my online life until I got my own domain, started Whatever, and began blogging in earnest here. But as far as the memory of the Internet is concerned, this sci.astro post is where I first pop up. As I mentioned elsewhere, I’m immensely relieved that the Internet’s first note of me is of me asking about science, rather than porn.

This is the part where I would note with wonder all the changes that have been wrought to the Internet since that fateful day, two decades ago, when I dipped my toe into the cyber-waters, but you know what, blah blah blah blah blah take it as read. I will say, as all middle-aged and older folks must in situations like this, that it’s a little amazing that twenty years has gone by. Sitting there in my Fresno apartment, staring into my Quadra’s monitor as I use Netscape to visit Spatula City, really doesn’t seem all that long ago. I wonder how it will feel in another 20 years.