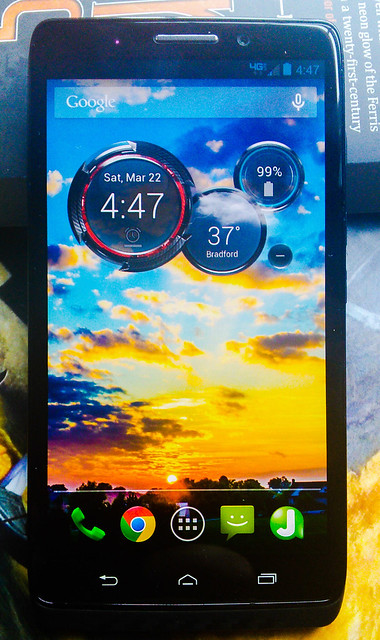 Today was the day my two year contract on my last phone ran out, and not a moment too soon, because after two years, the previous phone had seriously begun to chug. That one has now been retired with thanks for its service; here’s the new one, the latest Droid Maxx. Its primary selling point (for me, anyway): A massive battery that theoretically at least can last up for two days. Given how much I travel (a lot), that’s a heck of a selling point. It also has a hands-free thing that allows you to talk to it, and it calls and texts people. That’s pretty nifty.

I also signed up for Verizon’s “Edge” program, which will allow me to upgrade my phone every few months if I want. I am aware that it’s not necessarily the most financially responsible option, but I get annoyed with phones pretty quickly and also I can afford the relatively minor additional expense to avoid annoyance. Plus then I get shiny new technology on an accelerated schedule! Seemed reasonably prudent, all things considered.

So yes: New techno toy. I hope I like it.