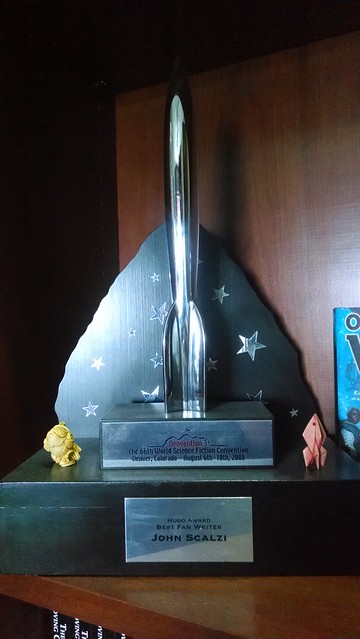 Over at File 770, Mike Glyer takes aim at pro writers who have won the Best Fan Writer Hugo, me included, on grounds that we tend to minimize the Fan Writer Hugo on our professional resumes; as Glyer puts it, “People who are building careers as writers do not want to identify their brands with anything that hints of the amateur.”

I have a direct response to him in the comments there, which basically is, no, actually, I’m really proud of my Fan Writer Hugo, it’s important to me for all sorts of reasons, and I mention it here not infrequently. At the same time I’m careful how I advertise the win in my professional life because I recognize that a fair number of fans would be spiky about me using it there. In my case it’s not about worrying that it’s an amateur award, but trying to respect the context of the award and the community which awards it. Clearly (as in Glyer’s case) the mileage may vary on this sort of thing.

Glyer’s post jostled up a few other thoughts I have about the Fan Writer Hugo, how it relates to pro writers, and a couple of other points. So let me just toss them out now in no particular order.

* I disagree (obviously) with the contention that I don’t mention the award because I’m worried about its “amateur” status, but I will note that it is a strange award to discuss with people outside of sf/f fandom. “Fan Writing” is a phrase that either doesn’t mean anything to them, or, alternately, means fan fiction writing — which is generally not what is meant by “fan writing” in sf/f fandom, although strictly speaking there’s no reason a fan fic writer couldn’t win the fan writing award.

However, outside unfamiliarity with the Fan Writer award also offers an opportunity to talk a little about the dynamics of sf/f fandom, and why, in fact, it honors that amateur and fannish activity with the same awards as it honors professional work. I’ve certainly done that, because I’m not shy in discussing my Hugos with people who ask about them. It’s interesting to see the reactions.

* Now, I’m not gonna lie: As a practical matter, in my professional life as a science fiction writer, the Hugo I have for novel writing is more useful that the one I won for Fan Writing (or for Best Related Book), and there’s no point pretending otherwise. When I’m doing things in a professional context and awards get trotted out, I usually lead with the novel Hugo. But in fact, having the other two Hugos is also useful in a professional sense, because it speaks to the breadth of my writing interest and skill. When I’m selling myself as a nonfiction writer — which still does happen — those work for me.

* I (again obviously) don’t think there’s a problem with a writer who is primarily known as a pro getting the fan writing award, if the writing is fannish (i.e., largely done outside a directly professional context and touching on matters relating to science fiction/fantasy culture and interests). And I think when I won the award, it was a useful win in that I was the first person in nearly two decades to win the award who wasn’t Dave Langford, i.e., it reminded people that spreading the award around was not a bad idea (this is where I note that Dave Langford, in all that I know of him, is a lovely person who deserves recognition for his work). I’m still pleased that since I won, there has not been a repeat winner in the category.

Still: at the center of Glyer’s complaint is a perfectly reasonable and valid point, which is that pro writers nominated in the fan writing category often have one useful advantage over other nominees — they’re better known. The Hugos are a popular award; having a name helps. It doesn’t guarantee a win — I lost a Hugo in the Fan Writer category before I won it, you know — but it can certainly be a factor. It does make it tougher for the other nominees in the field.

And so in this category, as in every other category, it behooves the people voting to make the effort to read the work of the nominees and ask themselves which ones have work which best exemplifies the goals of the award. If it’s nominee best known as a pro writer, fine. But if it’s not, why not vote for the one with the best work that year? Or at least, rank them highly, the Hugo Ballot being an Australian Rules ballot, after all. Awards are given, but awards should also be earned.

* I would be sad if the Fan Writer Hugo became little more than the Pro Writer Compensation Hugo, because there are lots of people writing in the fan community, not generally considered professional science fiction and fantasy writers, who deserve recognition. For example, I think it’s something of a crime that Steven Silver, for one, does not already have a Fan Writer Hugo. This is an error that should be corrected sooner than later. James Nicoll’s LiveJournal is a daily stop for me, even when the commenters there are taking a brickbat to my head; I’d like to see him awarded as well. Abigail Nussbaum is another excellent candidate for a win, in my opinion (I suspect me noting this will surprise her), and this year Natalie Luhrs also makes an excellent argument for consideration in the category. These are just four people off the top of my head; there are many more.

* I don’t think you can stuff the pro writers in the the Fan Writing category back into the bottle, if for no other reason that there have been people who have been nominated in and winning the category who have likewise been pro writers too. When I was nominated for Fan Writer and Best Novel in 2009, I wasn’t even the first person to do that; Piers Anthony had me beat by nearly forty years. But Glyer’s not wrong that the award is worth celebrating as its own unique category, and that it should be given for its own merits, and appreciated as such (particularly by the winners). I am proud to have won the award; I would be happy for the award to be won by people who are not always like me.

33 thoughts on “The Fan Writer Hugo, and Pros”