2014 has become a very busy year for travel and for appearances. New on the slate:

1. I’ll be at the Los Angeles Times Festival of Books on April 12, doing the panel “Redshirts: From Page to Screen” with Redshirts producer Jon Shestack and with TV Writer/novelist (and my super-awesome pal) Pamela Ribon as moderator. That will be at 2:30pm in the Ronald Tutor Campus Center, on the USC campus. Immediately after the panel I’ll be signing books, and I’ll be doing a second signing session at the Mysterious Galaxy tent at 5pm.

2. For booksellers and other folks in the publishing/book-related world, I’ll be at Book Expo America this year, which runs May 29 – May 31 at the Javits Center in New York. My schedule is still being formed and I will post it when I have it, but I can already tell you I will be doing some pretty cool stuff.

3. On May 2 – 4, I’ll be at Penguicon, in Southfield, MI (i.e., suburban Detroit). I don’t currently have anything planned for the convention other than hanging about, but I may add a panel or two.

4. Finally (for today, anyway), I’ll be returning to Phoenix Comicon once more for three days of fun and excitement and crazy wacky nonsense. The con runs June 5 – 8; I’ll be there Friday, Saturday and Sunday. Phoenix always does a great job getting fantastic authors to participate, and this year is no exception.

These are on top of already scheduled appearances in Seattle (this week!), Houston, San Francisco, Detroit (again) and London. And there are likely to be at least a couple more to come, not including the tour for Lock In, which will happen in the August/September timeframe. All the dates and details, as always, are noted on my Scheduled Appearances page. Check in on that page anytime.

In case you missed any this year, the complete Reader Request entries for 2014:

Reader Request Week 2014 #8: What Writing Lurks In the Shadows?

Thanks again, everyone who submitted a request! 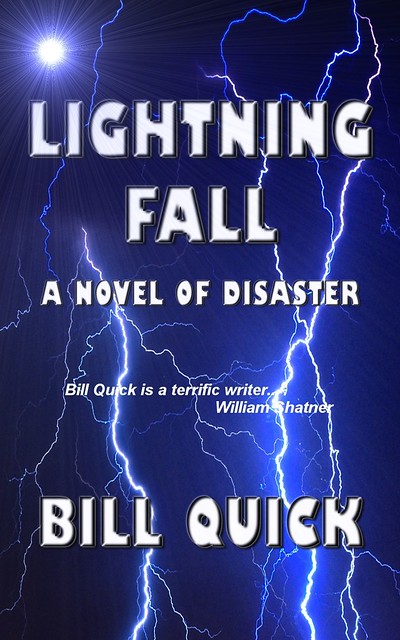 It’s the end of the world as we know it — and we do know it, because the end of the world has been essayed enough over the years. How to change it up and make things fresh? That was the question Bill Quick asked himself for his latest novel, Lightning Fall. This is how he decided to do it.

I’ve been writing science fiction for going on fifty years now. I was weaned on the later Golden Age guys like Asimov, Heinlein, Clark, Niven, Pournelle, and the man who inspired me face-to-face, Ted Cogswell, who wrote a landmark story called The Spectre General back in the day, to whom I dedicated my first published novel, Dreams of Flesh and Sand.

I still like all these writers. For better or worse, their use of big canvases, themes, and concepts still inspires the way I write and what I choose to write about. In particular, I’ve always been moved by what were once called disaster novels, but now have been sliced and diced into several sub-genres, including apocalyptic and post-apocalyptic fiction.   There aren’t many books I still re-read. Books like Heinlein’s Stranger in a Strange Land have not worn well with me, but every few years I pick up an book called Lucifer’s Hammer, written by Larry Niven and Jerry Pournelle, turn to page one, and make the trek out of a burning Los Angeles once again.

I’d always intended to try my hand at this sort of epic, but somehow, in the course of writing and selling a few dozen other books, I never quite got around to it. Until now.

EMP (electromagnetic pulse) fiction has become almost a sub-genre of its own. I’ve read several examples, and found one or two impressive, but I noticed that most of them used EMP as a McGuffin: An EMP happens, and that’s the end. Everything else is all about surviving the sudden imposition of an 18th century environment on a technological civilization. A particularly risible example of this approach was a recent TV series, Revolution, which depicted young people contending against threats with steel swords.  Apparently none of the screenwriters had any idea just how much technology was involved in making swords, let alone making and working steel, and how rare that knowledge is in present day society.

My view of modern technological culture is that it is well-nigh impossible to understand how interconnected everything has become. But I wanted to write an EMP disaster novel that tried, as well as I was able, to show the social, political, technological, economic, and cultural brittleness and frailty inherent in the existence we take for granted.

The best way to do so, it seemed to me, was not simply to turn out the lights, but to turn out only some of them – and then tell the tale of the sort of problems modern America would face if somebody or something abruptly removed, say, California from our current scenery.

A book I read a long time ago, The Late, Great State of California, took a similar tack, but handled it as a laundry list of what America would lose if California sank into the ocean after The Big One.

After much thought, I decided that things would be considerably more complicated than that. It took me a couple of years of research and writing to work out those complications, and I discovered in the process that human factors and reactions would likely have at least as much effect, if not more, than the problems created by the technological disaster.

We like to console ourselves that things generally work out for the best, that our leaders usually make intelligent, rational decisions, and that tomorrow will be a better day.  Unfortunately, history teaches us this is not always, or even usually, the case.

Lightning Fall: A Novel of Disaster, is my attempt to explain, in classic hard SF tropes, why and how catastrophe has been such an enduring and intimate feature of human history.

And is there a happy ending?

Well…maybe. Depends on what you mean by happy, I guess.