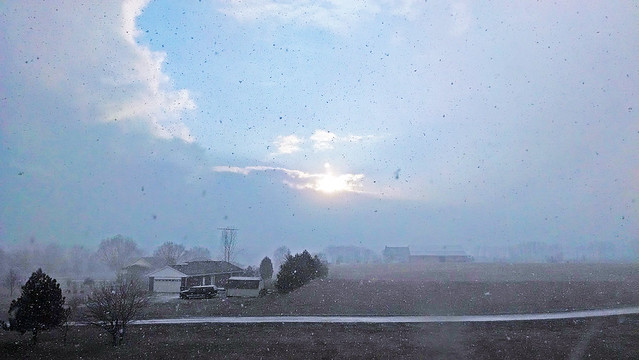 Not gonna lie. Not thrilled to have to snow out there at the moment. But having the sun out while the snow blows by makes for a pretty picture, at least.

Here’s the cool thing: The God Engines, my Hugo and Nebula nominated novella, is now part of the Humble eBook Bundle 3, a collection of DRM-free electronic works. The God Engines joins Jumper by Stephen Gould, Uglies by Scott Westerfeld, Tithe by Holly Black, and several other books by some of the best science fiction and fantasy writers today.

And how much do you pay? Well, that’s the thing: You pay as much or as little as you like for the Humble Bundle. But the more you pay, the more titles you unlock — and if you kick in $15, you’ll get the audiobook version of Cory Doctorow’s novel Homeland, narrated by Wil Wheaton (who has a book of his own in the bundle). $15 for eleven titles in total is not a bad deal at all.

And, when you buy the Humble Bundle, not only does your payment go to the authors, it also goes to the SFWA Emergency Medical Fund (supporting science fiction and fantasy writers when they get into medical scrapes) and to Worldreader, dedicated to increase literacy worldwide. Two good causes, supported by this one bundle.

If you want this bundle — and why would you not? — move quickly: It’s only available for one more week.

I’ll be at the Emerald City Comicon this weekend, hanging out, signing books and setting fire to all those who oppose me (well, maybe not so much that last one). If you will be at the convention, here are the things I will be doing:

Writing great dialogue does not always come easily to writers. Join John Scalzi and local authors to learn how to know if your dialogue works and what to do if it doesn’t.

Listen to John Scalzi talk about his life as author, father and all around raconteur! Best known for his Old Man’s War series, three novels of which have been nominated for the Hugo Award, John’s novel Redshirts was also recently optioned by FX to become a television series.

Also, apparently I have a table on the con floor: JJ-23, which is on TCC Level 3. Come find me. I will sign all your things. I will be there all weekend, when I’m not wandering about. My understanding is that the University Bookstore will be on hand selling books (look for Dwayne, he’ll be one of the three tallest humans at the con), so if you need to pick up copies for me to sign, there will be some on hand.

See you all in a few days! 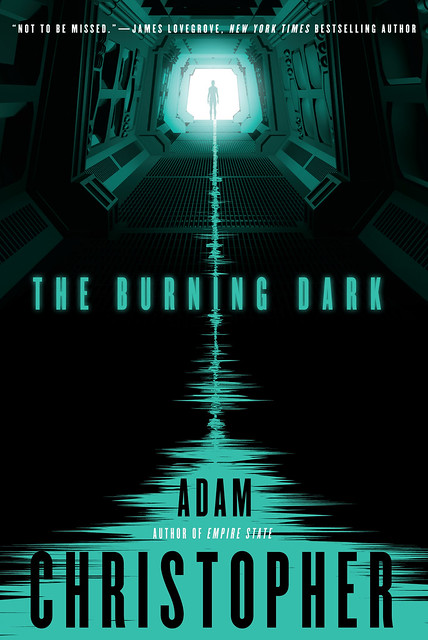 It’s the single most valuable question in a writer’s toolbox. From those two words, an infinite variety of story can flow. I might even go so far as to say it’s the foundation of storytelling.

Except, while you can reverse-engineer that initial question out of each of my first four published novels—Empire State, Seven Wonders, The Age Atomic, Hang Wire—I’m not sure any of those actually started from that point. There are as many ways to come to a story or idea as there are stories or ideas. “What if?” is a powerful tool, and although you’ll be answering that question when you write a book, you don’t necessarily need to be conscious of the fact.

But for The Burning Dark, my first foray into the kind of space opera-tinged science fiction that I grew up adoring, it wasn’t just one “what if?” question that gave me the big idea for the book. It was two.

I like science fiction of the kind that features spaceships and warp drives, federations that embrace a thousand different alien races and cultures, galactic empires that stretch across impossible distances. I was always going to write a book that had a least some of that in it.

But I also like ghost stories. From an early age, they were my favourite kind of story, and as I got older—helped, no doubt, by living right next door to a small library which had a remarkably well-stocked section on the paranormal—I developed into something of an armchair ghosthunter. From creaky old houses filled with shadows and cold spots and doors that open and close all by themselves, to people being thrown out of bed and living rooms trashed by poltergeists, I drank it all in. Whether such phenomena are real or not is beside the point—it’s a fascinating aspect of social and cultural anthropology. And they make for some damn fine stories.

So… what if you had a traditional ghost story, but instead of a haunted house, you had a haunted space station? What would that be like? How much of the trappings of old fashioned supernatural tales could you include, and what would be different?

The Burning Dark was born. Here I had an idea to combine two interests—space and ghosts—into a single story. Sure, it’s not like I’m the first person to have ever thought of that, but it immediately struck me as a fascinating idea. And one as creepy as heck.

I began to build the world. Space opera is science fiction on an epic scale, and while I was writing a small scale ghost story set aboard a decommissioned space station at the edge of nowhere, a larger universe unfolded. From that “what if?” question, I found myself describing the state of the human race a thousand years in the future, and the terrible war they were fighting against a machine intelligence, a hive-mind without reason or motive that was swarming across the galaxy with eight-legged killing machines.

And then I had another “what if?” question burning in my mind.

I don’t remember where I first heard the story, but the “urban” legend of the lost cosmonauts is something that has creeped the bejeezus out of me for years. As the story goes, before Yuri Gagarin’s historic space flight, the Soviets sent up a whole bunch of cosmonauts, each mission ending in failure and death, with capsules either burning up on re-entry or drifting off into the infinite black. It’s a slice of Cold War paranoia, backed up by the Soviet’s Orwellian habit of erasing people they didn’t like from history, literally airbrushing people from photographs and deleting them from records. It’s a scary and terrible story about sending heroes to their deaths, but there’s little evidence to support it.

Except for some audio recordings, made by a pair of Italian brothers, radio enthusiasts who managed to patch into Soviet communications. The recordings are indistinct and poor quality, and, to be totally honest, could be of anything. The most famous recording is of a female cosmonaut dubbed Ludmila, apparently reporting to Soviet mission control as her capsule burns around her. Listening to her is a very weird, even slightly disturbing experience. While there is no doubt that the recording came from the Italians—that the brothers picked up something—whether or not it is what it is supposed to be is, like a good ghost story, irrelevant.

But what if the lost cosmonauts were real? What if Ludmila really did send a mayday to Earth as her mission went fatally wrong?

What if someone, a thousand years later, picked up her signal, trying desperately to answer the call before realising the transmission was an echo from another time?

And… what if Ludmila answered back?

From two different but equally unsettling ideas I had something new, something that was as big as space opera but as claustrophobic and tense as an old ghost story told around a campfire. A story about space marines fighting alien war machines, while confronting an evil far stranger, darker and older than anything they have faced before.

All from two simple words: What… if?