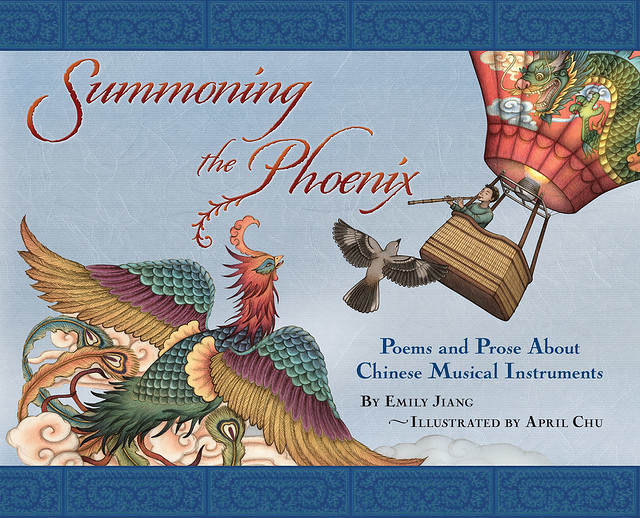 I don’t often get a chance to do a picture book on the Big Idea, so I’m pleased that one of the rare examples happens to be by a friend of mine, Emily Jiang, who wrote Summoning the Phoenix, illustrated by April Chu. The book received a coveted starred review by Kirkus (“[an] informative and gracefully illustrated twin debut.”] and covers an unusual topic (for here in the US, anyway): Chinese music instruments. How does one make this subject sing? Jiang is here to tell you.

I had always envisioned my first published book to be a novel, not a picture book. Writing a good picture book is difficult because of the need for economy of prose, the craft in conveying a ton of information in very few words. Plus, I’d been immersed in writing and rewriting young adult novels after graduating with my MFA in Creative Writing. I was certain something was going to happen with the novels, but somehow the picture book Summoning the Phoenix just caught fire.

The spark for Summoning the Phoenix came from researching and building my magic system for my YA fantasy novel, for which I had started world building a few years ago when I was in grad school. High fantasy is one of my favorite genres, yet as a reader I was over-saturated by fantasy worlds that were set in an alternate medieval Europe. I wanted to create a ancient alternate fantasy world that was All-Asian-All-the-Time, and I wanted my magic to have a uniquely Asian logic to it. Yet as an English major, my knowledge of European culture and history vastly exceeded my knowledge of Asian culture and history. So I researched.

My world building consultant and confidant in grad school was a renegade Buddhist nun who is the most unlikely nun anyone will ever meet. Instead of projecting a calm, pious aura, she is bubbly, irreverent, and sassy, always ready for a good laugh. Plus, she loves young adult fantasy, especially Harry Potter, both the books and the movies.

It was my renegade Buddhist nun friend who helped pick apart my magic system that I had designed to be All-Asian-All-the-Time. When I informed her that magic in my world would be based on Asian medical concepts and incorporating ideas like qi, or life force, and acupuncture points, she remarked that it sounded similar to Naruto, a popular manga and anime series. No, I replied, not bothering to let her know that I had never seen or read Naruto. My magic system was different and better because it would also incorporate the Asian elements layered on top of qi and acupuncture points. That’s when my unlikely nun friend started laughing, stopping only to tell me that now my world sounded like a cross between Naruto and Avatar the Last Airbender, the television series, not the movie.

She insisted I watch those shows, and I did, reluctantly, only to discover that she was right. My magic system was eerily similar to those found in Naruto and in Avatar the Last Airbender. It’s always a mildly horrifying experience to realize that you’re being derivative without even knowing that you’re being derivative. Or, to be more accurate, I was somehow in synch with other creative worldbuilders, but because my stories weren’t published yet, I needed to revise my All-Asian-All-the-Time magic system so it wouldn’t seem derivative. After a lengthy brainstorm, I decided that I would add a musical aspect to it. Some of my favorite genre novels featured musicians: Dragonsong by Anne McCaffrey, Archangel by Sharon Shinn, and most recently Seraphina by Rachel Hartman. Why not create magical musicians who were All-Asian-All-the-Time?

There was one problem. While I am a classically trained pianist and singer, my education was all Western music. A few years ago, I had very little actual knowledge about Asian music beyond the 1960s Tawianese pop music my parents loved to listen to while cleaning the house. A few years ago, I couldn’t name any of the traditional Asian musical instruments. So I researched.

During my research, I chose to focus on musical instruments from China because it would more directly reflect my cultural heritage. After reading books and countless articles, I gained a sense that perhaps traditional Chinese music was not considered as good as classical European music. I found this quite ridiculous, since Chinese music has a tradition of thousands of years compared to European music, which was only a few hundred years old. After acquiring all this interesting knowledge about Chinese musical instruments, I wanted to share what I’ve learned, to celebrate the creation of traditional music from China. Driven by this enthusiasm, I pitched this idea to an editor, who, coincidentally, had always wanted to publish a picture book about Chinese music.

It was not an easy path. I had to continue to research, rewrite, and revise my manuscript at least six or seven times before my editor gave me a contract to sign. Even after an illustrator was brought on board, I was still refining my words of the picture book until Summoning the Phoenix was ready to go to print. In the end, it was worth the work.

Now that my picture book is finally published, it’s time for me to return to writing novels, especially adventures of magical musicians in my YA fantasy world that’s All-Asian-All-the-Time.

And that’s Two Big Ideas for the price of one!