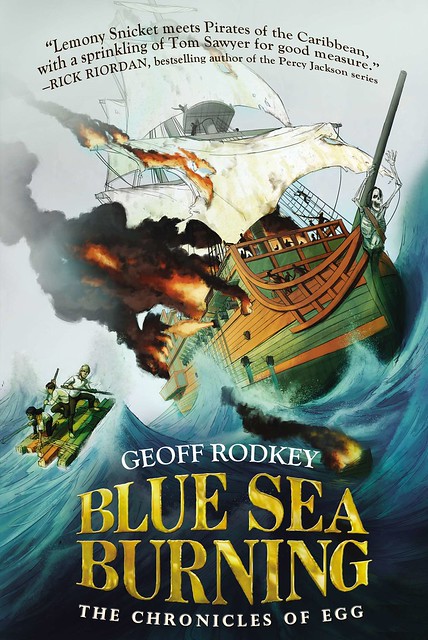 Some stories are easy. Others fight you, pretending to be one thing but then turning into something else entirely. Geoff Rodkey knows about the latter — for his Chronicles of Egg series, of which Blue Sea Burning is the final installment, he had to play his story like a marlin before reeling it in. Here he is to talk about how made it all work.

Crooked Pete was a pirate. And all the other pirates thought he was cursed, so they wouldn’t let him on board their ships.

In the end, the only job he could get was working as a waiter in a pirate-themed restaurant.

Then one day during the lunch shift, a lawyer came into the restaurant. He had a proposition for Pete, on behalf of a mysterious client…

Crooked Pete and his employment problems–not a Big Idea so much as a punch line–popped into my head one day for no apparent reason, and eventually became the inspiration for the Chronicles of Egg trilogy, the final volume of which, Blue Sea Burning, came out this week.

But while the series is full of a lot of things–adventure, comedy, mystery, romance, political intrigue, and a whole lot of mutilated pirates–one thing it DOESN’T have is a character named Crooked Pete.

Or a pirate-themed restaurant.

Or even a lawyer. (No, wait…there’s one lawyer. But it’s a different lawyer.)

Because in the two years I spent thinking about the story before I started writing it, all of those things fell away. As a character, Crooked Pete turned out to be a dead end. The island full of rival pirate crews who’d blacklisted him became too realistic (and economically primitive) to accommodate a restaurant, let alone a pirate-themed one.

And the mysterious client, who I’d initially envisioned as an obnoxious 13-year-old rich kid with a family that had recently disappeared under suspicious circumstances, leaving him in sole control of their island plantation and possessed of a manic grandiosity that led him to hire Crooked Pete as muscle in a clumsy attempt to intimidate people…well, at first, I thought that kid was going to be the main character.

But he was kind of an asshole.

So he became a hapless, dirt-poor kid with the unfortunate name of Egg, who bears no resemblance to the original rich kid except in his core predicament: that his family’s accidental disappearance was no accident…and the sinister forces behind it are plotting to kill him next, even though he has no idea why.

In the end, almost nothing survived of my original idea except the setting, the tone, and the intent: to write the kind of funny/thrilling/emotionally resonant story I wanted to read.

(The fact that The Chronicles of Egg wound up being marketed as middle grade seems to indicate that I have the literary taste of a sixth grader. I’m not sure what to say about that, except possibly “sixth graders have awesome taste.”)

In my experience, which includes film and TV as well as books, the best stories are often like this–whether they’re the product of a Big Idea or not, the end result can look very different from its original inspiration.

You start out with one thing. And it seems kind of cool, but it doesn’t quite work, or it’s too slender to support a story. And if you try to write it, it falls over dead.

So you put it aside. But there’s a core element that’s compelling enough that you can’t let it go. It keeps percolating in your mind, sometimes for years, slowly morphing into something that’s unrecognizable except for some basic DNA it shares with the original thing that inspired you.

And one day, something clicks, and you can finally start writing it.

This was true not just of the Egg books, but of the first screenplay I ever sold. It started out as an idea for a novel about a small-town English teacher in Indiana who gets put on trial, Socrates-style, for corrupting the young.

By the time I sold it as a screenplay five years later, it had become a story about a shady sports agent who arrives in a small town in Texas to recruit the high school’s star quarterback and, in a convoluted turn of events, winds up coaching the football team, loses the big game, and gets hung under the goal posts by an angry mob.

Which had nothing in common with the original idea except the arrival of a stranger in a small town who, by the end of Act Three, finds himself hanging from a rope. But it was a fun script. (The townspeople cut him down before he actually dies; it was a dark comedy, but it wasn’t THAT dark.)

Unfortunately, since it’s currently buried in the underground facility in the San Fernando Valley where Universal Pictures stores all their unproduced screenplays, nobody can read it.

But that’s not true of the Egg books! Now that Blue Sea Burning is out, all three of them are available. If you want to check them out, it’s best to start at the beginning, with Deadweather and Sunrise (here’s an excerpt, to catch you up).

It’s a fun read, even if it doesn’t actually contain a disgruntled pirate waiting tables in a pirate-themed restaurant.