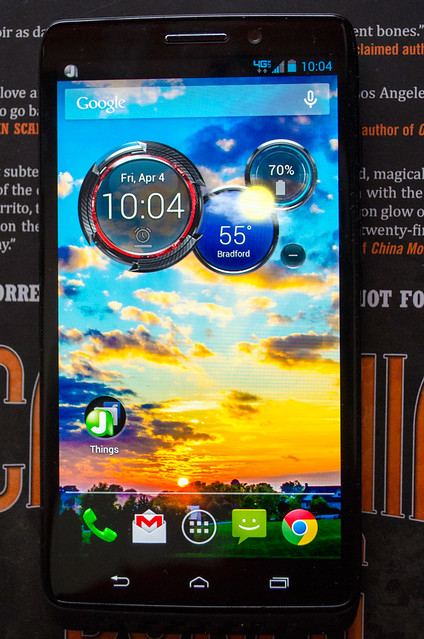 I’m two weeks in to owning the Droid Maxx, and I gotta say that I love love love the thing, and the reason is almost entirely down to the battery life, which for me at least lives up to its advertised claim of lasting up to 48 hours. The acid test was me taking it to Emerald City Comicon and keeping it off a power tether from the moment I woke up until I put my head on the pillow. I simply never had to worry about how much battery life I had left. That’s literally the first time I could do that with a smart phone.

For those about to ask, I will note that I am not a “power” smartphone user, which is to say I don’t watch a lot of video or play many processor-intensive video games on it. I’m mostly text-based: I check Twitter and email, hit Facebook occasionally, cruise around the Web and read books, text every now and then and even (rarely) make a phone call. If I used the phone as a primary screen for Netflix and HBO Go, I could see possibly running out of juice at some point before midnight. But how I use the phone? Really, not a problem at all.

The phone is otherwise more than sufficient for what I use phones for — it pops up apps quickly, doesn’t get bogged down, processor-wise, and so far I haven’t once cursed at it, which may be a record for a smartphone. The screen is lovely (it’s not 1080p, which I understand some people hold against it, but it’s more than hi-def enough for me) and the no-touch commands Motorola and Google have baked into it work like a charm for me. My only real complaint is with the camera, which is inconsistent, particularly with auto-focus. But then I don’t think I’ve ever had a phone that has been more than barely adequate on that score, so I don’t really count it against it.

Also, while the five-inch screen is bright and lovely, I think I now know the maximum size I want my phone to be — I can only just get my thumb all the way across the screen while holding the phone with one hand. I can’t imagine wanting a larger phone. I mean, the thing is big enough as it is.

But really, again, for me what it comes down to is battery life, and this phone’s got it. Tons of it. Scads of it. The Droid Maxx is now my benchmark for that particular aspect of a smartphone. In the future, if a phone can’t match its battery longevity, I’m probably not going to get it. Likewise, if battery life is as much a consideration for you as it is for me, take a look at the Droid Maxx. So far, at least, I’ve been very happy with it.

13 thoughts on “The Droid Maxx, Two Weeks In”